In July the U.S. Patent & Trademark Office published a patent application from Microsoft revealing their intent to introduce advanced biometric security for future Windows smartphones, their Surface 2-in-1 hybrid tablet/notebook and extending right through to their new enterprise centric Surface Hub smart whiteboard. The key to the invention is that the security bar is being raised by introducing the use of multiple biometric features rather than a single biometric system such as is used with Apple's Touch ID.

The Short comings of Apple's Touch ID: Microsoft notes in their patent filing "that more recently, the iPhone introduced a touch identification technology that allows users to easily and securely unlock their devices by embedding a fingerprint sensor in the home button. Even though this approach addresses both the usability and security requirements of the authentication process, it is fundamentally limited to devices with large physical buttons on the front, such as the home button on the iPhone.

However, as phone manufacturers push for devices with large edge-to edge displays, physical buttons are quickly replaced by capacitive buttons that can be easily embedded into the touchscreen, eliminating the real-estate required by a fingerprint sensor. Further, this solution requires the additional fingerprint sensor hardware and thereby increases device cost."

The thing is, Apple has a patent covering that eventuality here and noted below – and there's been a supply chain rumor that we reported on back in June about Apple preparing to do away with the Home Button. 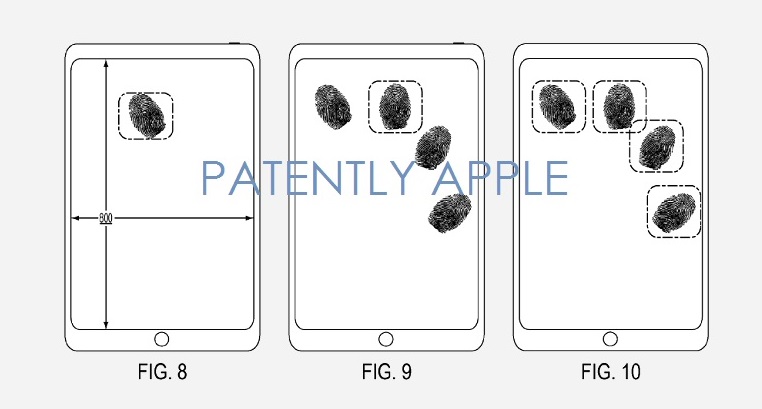 Technically, Apple filed their first patent on concealing their biometrics behind the display all the way back in 2013 (filed in 2011). So Microsoft is actually the one behind the curve.

Who will bring this security feature to market first? Only time will tell.  For more on Microsoft's multiple biometric feature invention, read Patently Mobile's full report.