Sometime after the NFC Forum's 2015 Conference in New Zealand on Mobile Payments it appears that Apple has joined the group as a sponsored member. Further, the NFC Forum's Board of Directors has also welcomed Apple's Syed Aon Mujtaba, Director on Apple's Wireless Systems Engineering team for the iPhone as its newest member. Mujtaba is noted on a number of Apple patents on radio technologies such as this one titled "LTE/1X dual-standby with single-chip radio." Other notable companies sitting on the NFC Forum's Board include Google, Broadcom, Qualcomm, Samsung and Visa.

The Near Field Communication Forum was formed to advance the use of Near Field Communication technology by developing specifications, ensuring interoperability among devices and services, and educating the market about NFC technology. Formed in 2004, the Forum's global member companies, including manufacturers, applications developers, financial services institutions, and others all work together to promote the use of NFC technology in consumer electronics, mobile devices, PCs, and more. For more information on the NFC Forum, check out their website here.

Apple patents regarding the use of NFC began to roll out in 2009 with Apple promoting the NFC Forum's N-Mark logo (As noted below). Apple's NFC related patents that first covered Apple Pay (known then as iWallet) and Passbook could found in Patently Apple's Archives here. 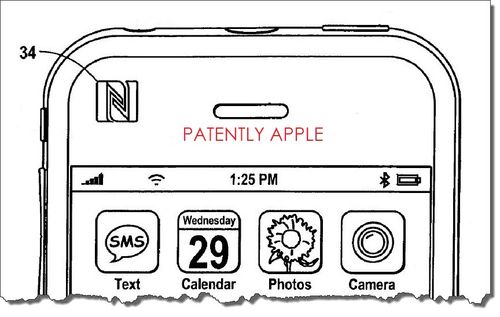