On August 6, 2015, the U.S. Patent & Trademark Office published a patent application from Apple that reveals their ongoing work on imaging systems, and particularly to devices and methods for multispectral imaging. This past week Apple was granted yet another patent for Scanning Projectors for 3D Mapping and some of the same engineers on that patent worked on this current invention. The next wave in photography for mobile devices will include the ability to capture images in 3D. Apple acquired PrimeSense and LiNX Imaging who are leaders in the field of 3D photography and mapping. With such tremendous talent and intellectual property on hand there's no doubt that Apple will be introducing 3D camera capabilities to future iDevices. It's not a matter of if but rather when.

Intel has taken the leap into 3D photography with its RealSense 3D technology for cameras which are starting to roll out in tablets and will be coming to notebooks and smartphones later this year. So the 3D camera revolution is now upon us and it'll be exciting to see what Apple introduces in the not-too-distant future

Apple's current invention relates to devices and methods for multispectral imaging. In Apple's patent FIGS. 1 noted below we're able to see a frontal view of imaging module #20 while FIG. 2 is a side view. The imaging module comprises a single semiconductor substrate #22, such as a silicon wafer substrate, on which a matrix of detector elements #24 is formed. The substrate and detector elements may be configured as a CCD or CMOS-type image sensor. In one embodiment, the module is based on a commercially-available CMOS image sensor with full-HD (1920.times.1080) resolution.

Apple notes that the imaging module may advantageously be used for 3D mapping and color imaging. More specifically, the module has the advantage of providing both IR and color images within a single unit in fixed registration, in contrast to systems known in the art, in which active alignment and registration may be required. A pattern of IR radiation is projected onto a scene of interest, and the IR image is processed in reconstructing a 3D map of the scene. 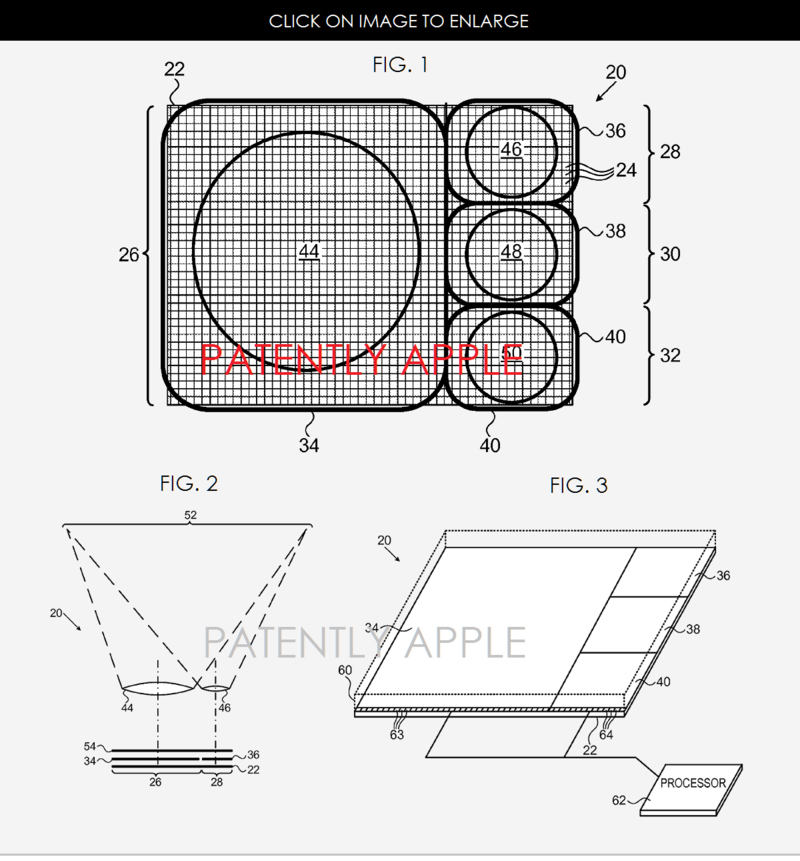 In Apple's patent FIG. 3 noted above we're able to see a schematic, pictorial view of the imaging module. In this embodiment, the objective optics comprise a transparent wafer #60, which is etched to define focusing elements corresponding to lenses #44, #46, #48 and #50 for forming the respective images on the different regions of the matrix of detector elements on substrate #22. Further, objective optics, comprising lenses 44, 46, 48 and 50, focus light respectively through filter zones 34, 36, 38, 40 onto regions 26, 28, 30, 32, and thus form an image on each of the regions of a common field of view.

Side Note about Apple's Continuation Patent for "Digital Mixed Tapes"