In May 2014 we posted a report titled "Apple may Surprise the Market with a New Smart Home Platform," and in June 2014 we posted a follow-up report titled "Could Apple TV be one of Apple's hottest iDevices of the Year?" The second report was about using Apple TV as an in-home automation hub. Samsung had been working on this idea at the same time. Today, more proof of Apple using Apple TV as an in-home automation hub came to light. The emphasis of Apple's latest invention is about a new Apple TV remote with integrated Touch ID. It will allow users to quickly enter a channel like Netflix without having to key in a password and allow only authorized family members to make purchases on iTunes. But more importantly, Apple describes the remote being able to be used to interact with home automation features and appliances.

Many electronic devices include a plurality of manually controllable features and settings that users may modify from time to time. For example, a television may include operational controls such as power, volume, channel, screen brightness and so on.

In some examples, alterations to electronic device settings made by a first user may diminish the quality of the experience of a second user. Furthermore, some electronic devices may include features or options inappropriate for some users to modify or enable.

In many cases, electronic devices may include access limitation features such as passcodes or passwords to prevent inappropriate modification of settings. For example, a television may require a passcode to tune particular channels. In still other examples, a home security system may require a password to cancel a false alarm.

Remembering and correctly communicating passwords or passcodes to enjoy limited access features of electronic devices may diminish the quality of the experience of an authorized user. In certain cases, the user may be additionally frustrated when directed to enter a passcode or password via a small remote control or a compact input panel.

In other examples, a user with limited access may undesirably obtain passcodes or passwords to access features that the user is not permitted to enjoy.

Furthermore, if a password or passcode is lost, forgotten, or discovered, a time-consuming and burdensome re-authorization process may be required of a previously authorized user.

Accordingly, there may be a present need for an electronic device having improved limited access features.

Apple's invention may relate to or take the form of an electronic device having at least one operational setting, such as a power setting, with at least a first state and a second state. The electronic device may also include an access controller that can receive state data and authorization data from an external source such as a remote control. The access controller may enable a state of the operational setting upon receipt of proper authorization data.

In other examples, the authorization data may be the output of an algorithm using biometrically identifying information as an input. For example, the algorithm may be a message-digest algorithm, an implementation of the advanced encryption standard, or any other one-way encryption or data processing algorithm.

The remote may include at least one sensor configured to detect a biometric characteristic of a user.

In some examples, a sensor may be a fingerprint sensor or, in other examples, the sensor may be a retina or iris sensor, an electrocardiography sensor, a vein imaging sensor, voice sensor, or any other sensor capable to objectively measure a unique biological characteristic of a user. 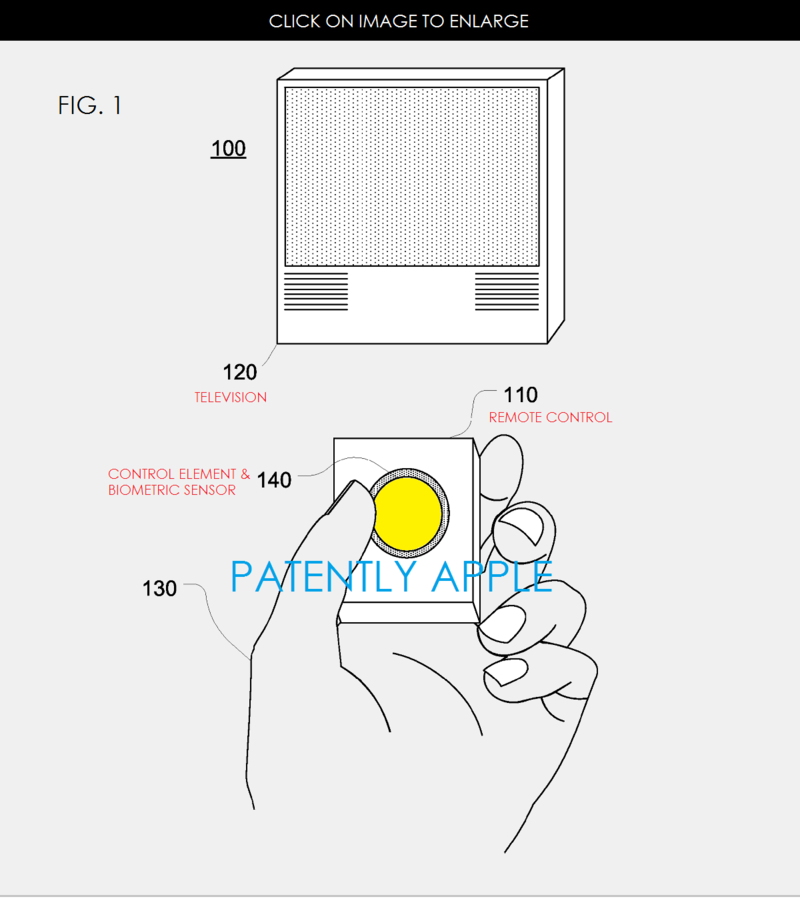 Apple's patent FIG. 1 is an isometric view of a system #100 for operation of limited access features of a TV (an electronic device #120) using remotely collected biometric data. The system may include a TV and a remote TV controller (device 110). The TV remote controller may be in communication with the TV and may be operable to transmit one or more instructions to it.

In other implementations, the sensor may be any kind of sensor (such as one or more cameras, inertial sensors, photoplethysmographic sensors, and so on) that is operable to detect at least one unique biometric characteristic of the candidate user. Such biometric characteristics may include, but are not limited to, retinal or facial images, palm prints, gesture patterns, signatures, and/or any other kind of unique biometric characteristics of the candidate user. In still further embodiments, the remote control device may include more than one element sensor element. For example, the remote control device may include a number of buttons or sensors, each capable to cause an instruction to be sent to the TV. Such instructions may include state information and/or authentication information. The template biometric data may be previously recorded or otherwise collected from an authorized user during a training process. For example, the template data may be a previously-measured fingerprint of an authorized user.

In this example, when the authenticated user operates another feature of the remote, the authenticated user may already be authenticated to operate that feature. However, if another user were to hold the remote and alight his or her fingerprint with the sensor, the remote may determine that the second user is not an authorized user. Thereafter, the second user may not be permitted to access certain features of remote. For example, a parent maybe an authorized user of a television remote such that when the parent handles the remote and aligns a finger with a fingerprint sensor, the remote may determine that the parent is an authorized user. Thereafter, the parents may be able to access limited access features of the television without being prompted for a security or authorization code.

In another example embodiment, the authorization data may include biometrically identifying information that confirms the identify of a user. For example, if a user selects a button to make a purchase of content displayed on the television (e.g., pay-per-view movie), the remote may send to the television information that authenticates the identity of the user associated with one or more purchase accounts.

Apple makes it crystal clear that the remote can be used beyond controlling your Apple TV and television. Apple specifically notes that the remote will be able to control other electronic devices such as thermostats, air conditioners, heaters, fans, kitchen appliances, home automation controllers, security systems, vehicles and more. 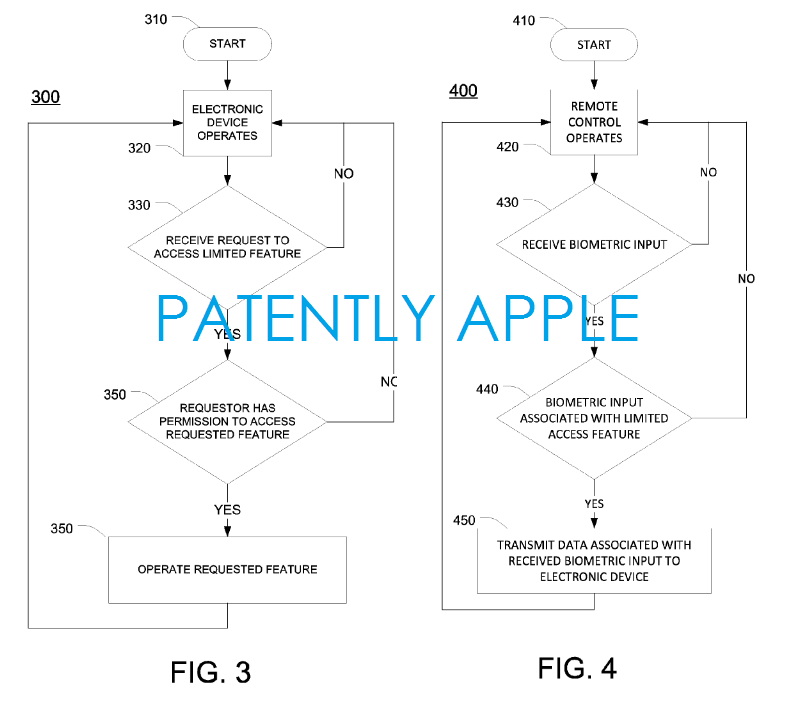 Apple credits Michael DiVincent, Nicole Hollopeter and Ruben Caballero as the inventors of this patent application which was originally filed in Q1 2014. Considering that this is a patent application, the timing of such a product to market is unknown at this time. For other Apple TV related patents see our archives.