Home Archives Contact Us Subscribe Twitter Facebook MeWe Patently Mobile
Apple's Supply Chain Claims Mac Sales will do Even Better in the Second Half of 2015
As Expected, Apple Goes on Record Supporting the 'Equality Act' being introduced in Congress

IDC Reports Apple's Smartphone Growth Year over Year is up a Staggering 34.9% with Samsung's Crashing by -2.3% 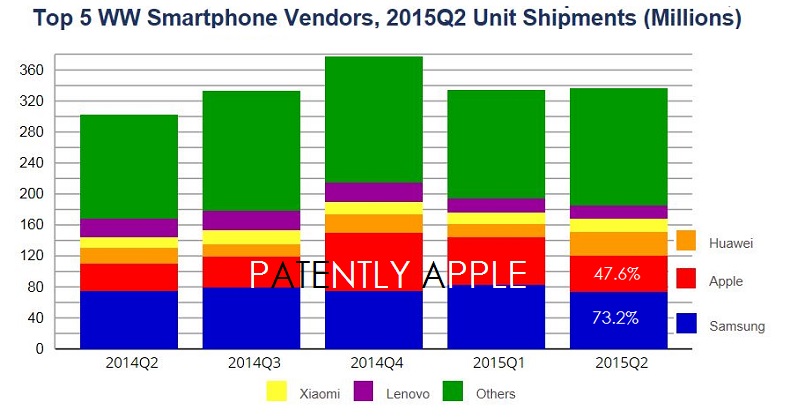 According to IDC's latest statistical report regarding smartphone sales, they note that "Apple's second quarter proved to be its biggest fiscal third quarter ever with 47.5 million units shipped. The iPhone once again continued to dominate in China where shipments remained buoyant after a strong first quarter. The larger screened iPhones along with the rapid expansion of 4G networks in China continued to drive momentum for Apple in Asia/Pacific. As smartphone saturation continues to climb in many new developed markets like China, Apple will look to drive upgrades with refreshed "S" models in the following quarter.

In the bigger picture, the IDC report claims that vendors shipped a total of 337.2 million smartphones worldwide in the second quarter of 2015 (2Q15), up 11.6% from the 302.1 million units in 2Q14. The 2Q15 shipment volume represents the second highest quarterly total on record. 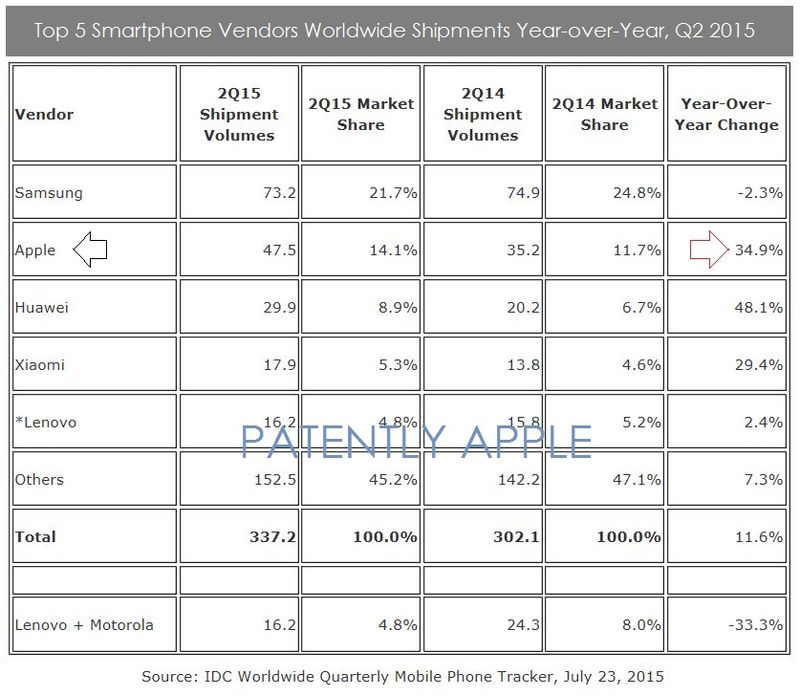 According to Anthony Scarsella, Research Manager with IDC's Mobile Phone team, "The overall growth of the smartphone market was not only driven by the success of premium flagship devices from Apple, Samsung, and others, but more importantly by the abundance of affordable handsets that continue to drive shipments in many key markets."

Samsung remained the leader in the worldwide smartphone market but was the only company among the top five to see its shipment volume decline year over year. The new Galaxy S6 and S6 edge arrived with mixed results as a limited supply of the edge models did not keep pace with the demand for the new curved handset. Older Galaxy models, however, sold briskly thanks to deep discounts and promotions throughout the quarter. All eyes will now be on the early release of the pending Note 5 and rumored S6 edge plus to come this August.

Huawei captured the number 3 position thanks to strong European sales as well as domestic sales that led to a staggering 48.1% year-over-year growth. Huawei's mid-range and high-end models continue to prove successful with the flagship P8, Honor Series, and Mate 7 handsets delivering sustainable growth both in the consumer and commercial segment. Huawei will now look beyond Europe and Asia/Pacifc as its latest P8 Lite handset launched in the U.S. (as an unlocked model) for only $250 earlier in the quarter.

Xiaomi continues to find success in its home country thanks to both premium and entry-level devices like the Mi Note and Redmi 2 handsets, which helped Xiaomi achieve a 29.7% year-over-year increase. With a significant presence in India and Southeast Asia, Xiaomi is now looking to bulk up its IP portfolio to expand its reach even further outside of Asia/Pacific, starting with Brazil.