A patent troll by the name of Packet Tread has filed a patent infringement lawsuit against Apple. The patent infringement lawsuit concerns the use of simultaneous voice and data (SVD) modems in a remote office application. Packet Tread never really single's out an Apple product by name other than one supposedly titled "Online Banking Preferred method of contact ('Accused Instrumentality')" that they allege infringes the Paradyne patent that they acquired for the sole purpose of suing companies like Apple with. Paradyne patents are popular with patent trolls. Back in January, Nevada's Adaptive Data filed a patent infringement lawsuit against Apple regarding Bluetooth that was based on an acquired Paradyne Corp patent. Bloomberg weaves Paradyne Corp. back to Paradyne Networks and finally back to Zhone Technologies. 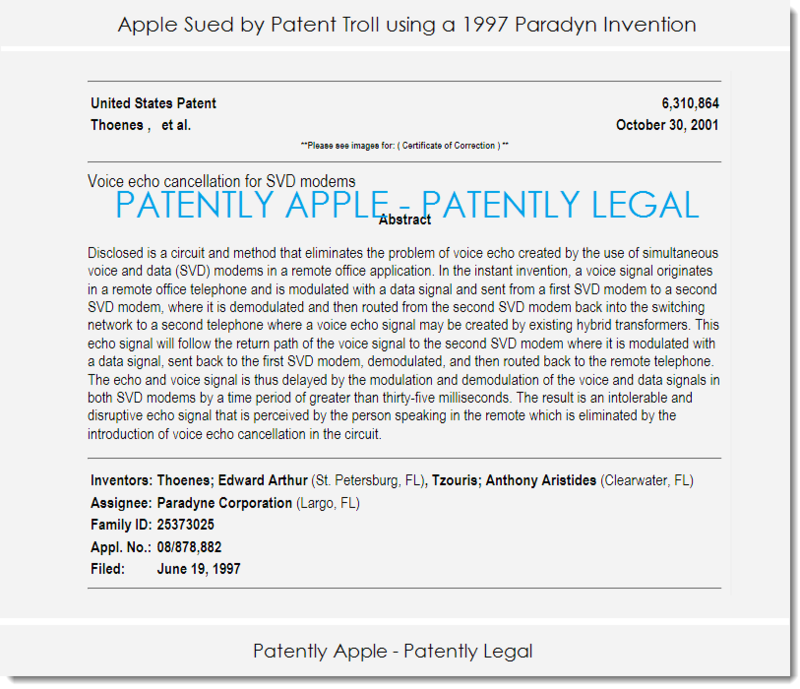 They further state that "Defendant [Apple] directly or through intermediaries, made, tested, had made, had tested, used, imported, provided, supplied, distributed, sold, and/or offered for sale products and/or systems and methods for user interface for defining and automatically transmitted data according to preferred communication channels, that infringed one or more claims of the '864 patent in this district and elsewhere in the United States.

Defendant's aforesaid activities have been without authority and/or license from Plaintiff."

Packet Tread is seeking, among other things, a "reasonable royalty" should the Court find Apple guilty of patent infringement.

The patent infringement case presented in today's report was filed in the Texas Eastern District Court, Marshall Office. At present, no Judge has been assigned to the case. We reported on Monday that Apple remains the number one target of patent trolls.