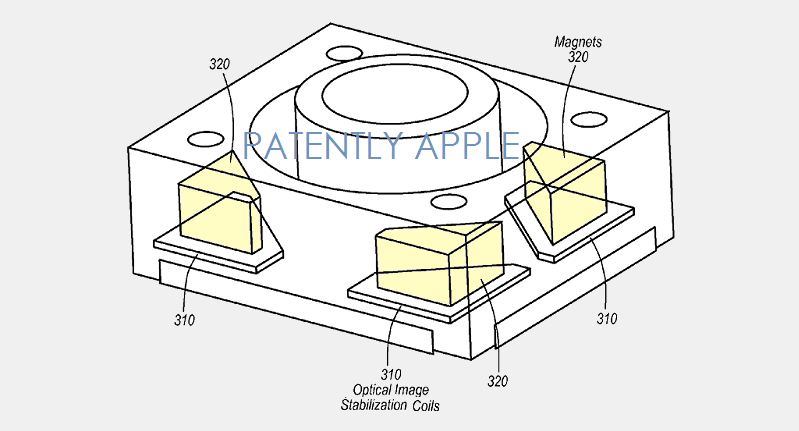 Apple's iPhone 6 Plus introduced optical image stabilization that works with the A8 chip, gyroscope and M8 motion coprocessor to measure motion data and provide precise lens movement to compensate for hand shake in lower light. The fusing together of long- and short-exposure images also helps to reduce subject motion. This unique integration of hardware and software delivers beautiful low-light photos. Today, the U.S. Patent & Trademark Office published a patent application from Apple that reveals their method of using multiple magnets affixed to the iSight camera lens assembly structure to deliver advanced optical image stabilization for the new iPhone 6-Plus.

For high-end computing devices, it is common to incorporate miniature cameras, with `optical image stabilization` (OIS) using magnetic coils, whereby the object focal distance is adjusted to allow objects at different distances to be in sharp focus at the image plane, to be captured by the digital image sensor. There have been many proposals for achieving such adjustment of focal position.

Demands on improvements to performance of such miniature cameras are constant, as are demands for continued miniaturization, given the added features and devices added to such mobile devices.

In particular, demands to decrease the dimensions of camera components and demands for high image quality continue to create an ongoing desire for camera components that exhibit superior performance as measured in various ways, while consuming less space.

Apple's patent FIG. 3 noted below illustrates a camera module. A camera (image capture device) #300 is shown. Optical image stabilization coils #310 are mounted adjacent to Hall sensors (not visible) on an "underside," (i.e., between the sensors and) magnets 320.

In some embodiments, an actuator module support structure #450 includes a module cover #460. A focusing mechanism #470 is suspended on the actuator module support structure by a suspension means #480 configured to limit relative motion of a lens carrier (barrel #490) mounted to the focusing mechanism #470. A plurality of magnets #420 affixed beneath the module cover at positions in a plane orthogonal to an optical axis of a lens #405 mounted in the lens carrier. A plurality of optical image stabilization coils are mounted between the cover and the plurality of magnets. 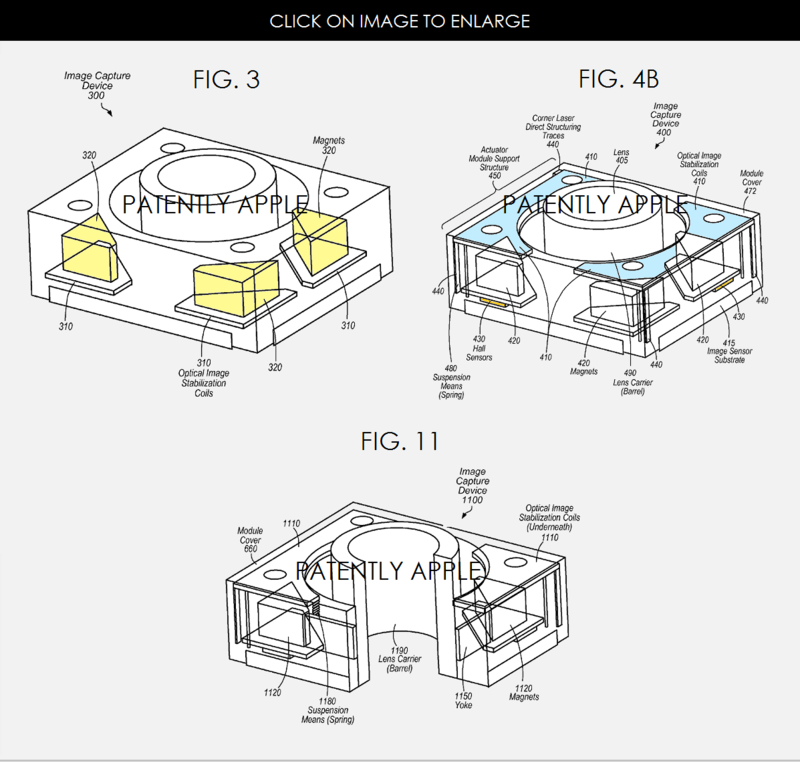 Apple credits Scott Miller, David Beard, Douglas Brodie and Aurelien Hubert as the inventors of patent application 20150195439 which was originally filed in Q2 2014.