Today the European Patent & Trademark Office published Apple's latest trademark filing for "OS X El Capitan." There's an interesting twist to this filing that could be significant if Apple ever decided to act on it. It's an element of their international Class verbiage that wasn't listed for either OS X Mavericks or Yosemite. The element is "tablets." Is Apple hinting that this is a future possibility? Only time will tell.

According to the European Patent and Trademark Office's documentation, the trademark was officially filed under International Class 009 with the specific verbiage as noted in full below. 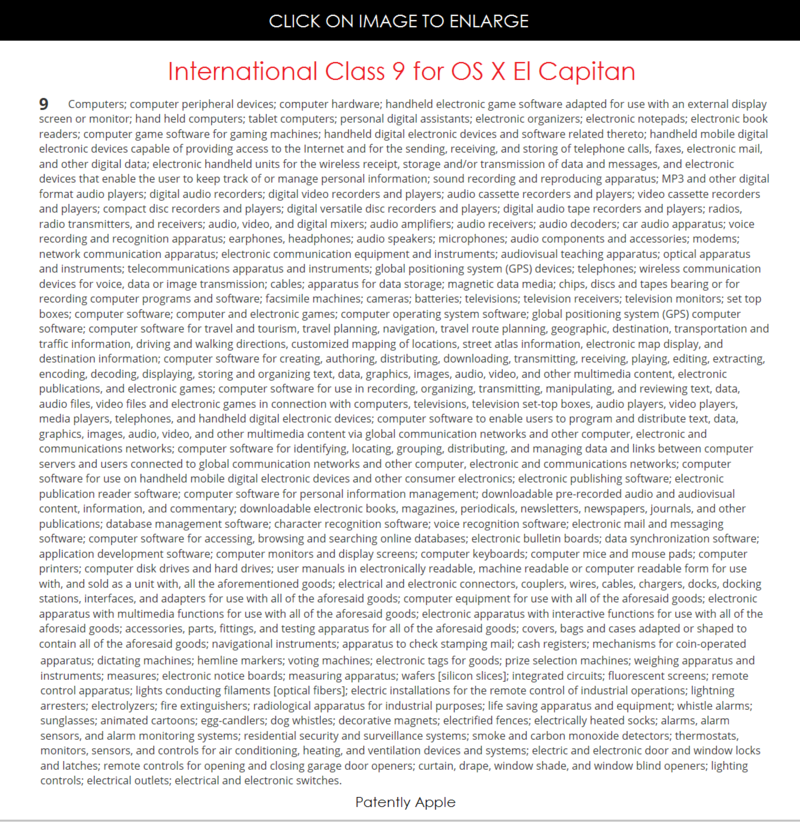 While the verbiage found in any trademark application by Apple won't always be reflected in what Apple will actually deliver in the future, there are times when an oddity has to be brought forward with a little added light.

No, Apple won't use El Capitan in context with heated socks or an electrified fence that have no connection to Apple's new operating system even if it's listed – but they could deliver an iPad Pro that could run the new OS X version. That's what's listed and I find that the most interesting twist I've seen this year. It could be purely coincidental, or it could be quite significant. Especially if Apple decided to take on the philosophy of Windows 10 where a tablet would run iOS and when a keyboard is connected it could switch to OS X.

This is interesting on several levels, but since IDC's newly published study shows that the hybrid tablet-notebook is destined to be adopted by 50% of enterprise users over the next few years, Apple's iPad Pro following this trend would be a real challenge to the Windows Surface product line and the related Wintel OEM products supporting Windows 10 this fall.

It's interesting because Apple's US Trademark filing for Yosemite had this verbiage: "computer software, namely, computer operating system software." No mention of tablets there. OS X Maverick in Europe covered the same verbiage as noted for Yosemite. So the overkill in this present trademark application is interesting, especially due to the addition of tablets.

Of course it's only a trademark filing and so we can't get overly excited by the prospect of OS X running on a future iPad Pro, but it does raise an eyebrow as to why Apple decided to add this entry at this point in time for OS X El Capitan. For some of us who would like to see this feature come to market, we'll just have to keep our fingers crossed that such a surprise is in the wings.

Update July 17, 2015: Apple filed for the El Capitan trademark in the U.S. under number 86691620 officially on July 13 and published by USPTO on July 17. Compared to the extra long International Class 9 coverage in Europe, Apple filed only four words for class 9 in the U.S.: "computer operating system software."