In February we posted a patent report title "Apple Introduces an Alternative Touch ID Method using Full-Display Fingerprint Sensors." That patent clearly showed us that Apple was researching an alternative method of implementing Touch ID through the front displays of iDevices rather than the traditional Home Button. Today, the U.S. Patent & Trademark Office published a patent application from Apple that reveals yet another method of integrating Touch ID into an iDevice like the iPhone. Apple illustrates that they could easily hide the Touch ID's biometric circuitry within the Apple Logo on the backside of the iPhone so as to free up space on the front side display. Secondary features of this new invention could allow various parts of Apple's identification insignia, such as the logo and wording, to be used to hide tiny health related sensors like a heart rate monitor and/or allow circuitry to be open on the backside so as to support the design of an all new docking station concept.

Accordingly, there may be a present need for an electrical connector that does not require additional apertures in the housing of an electronic device.

In some embodiments, the first insert and second inserts may at least partially define an electrical path which may constitute a skin conductivity sensor, a heart rate monitor, or any other suitable biometric sensor.

In February we posted a patent application report title "Apple Introduces an Alternative Touch ID Method using Full-Display Fingerprint Sensors." That patent clearly showed that Apple was working on an alternative way to implement Touch ID through the display panel rather than the traditional Home Button.

Today's patent application continues that line of thinking by creatively using the backside of an iPhone and more particularly the Apple Logo insert as doubling as a Touch ID sensor – and beyond. Last week we reported that "Apple was working on a Full iPhone Display that would Drop their Classic Home Button," and so this patent confirms once again that Apple is exploring various methods to reinvent the ID scanner positioning. Though admittedly, at first glance, this current idea would seem to less inconvenient. However, if the logo is also recessed so that the user's finger could easily feel the logo, then perhaps this could work nicely. But that isn't currently noted in Apple's filing. 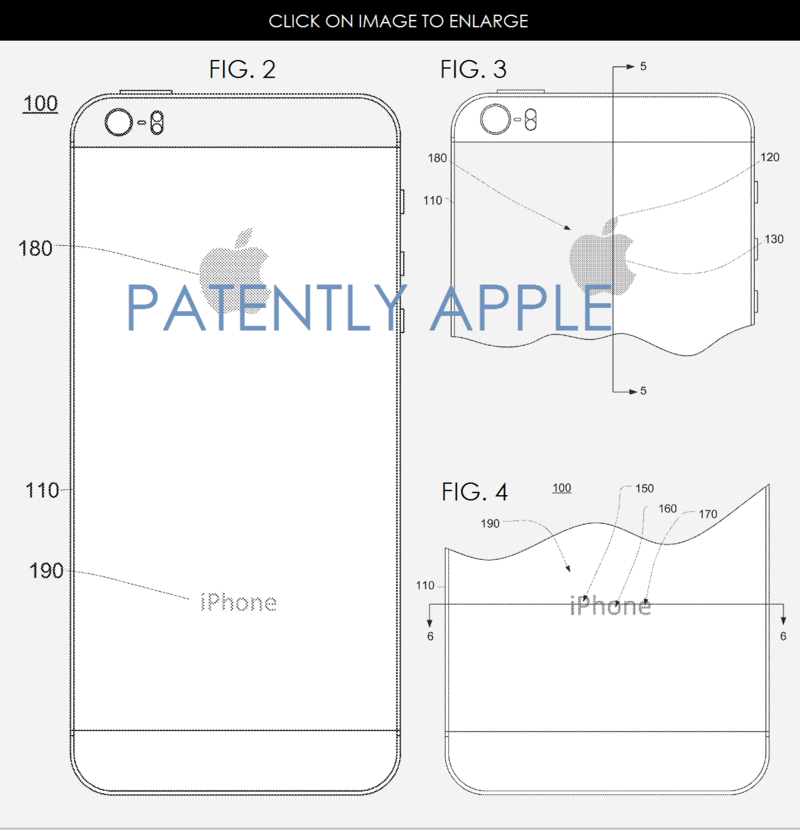 Apple's patent FIG. 2 noted above depicts a back view of the sample iPhone #100. Along the back the iPhone may be one or more externally visible features that may such as the Apple logo and other visual identifications. Apple's patent FIG. 3 depicts a detailed view of a portion of the iPhone's backside showing a the Apple logo having multiple distinct parts. In the illustrated embodiment, the product logo may include a small insert portion #120 and an insert portion #130, each placed within a different cavity representing a different portion of the logo. Each insert portion may be composed of a material different than that of the housing that is constructed of an electrically conductive material.

Apple notes that in some embodiments, the electrical circuit may be a sensor, such a biometric sensor or fingerprint sensor. In such a case, when a user grasps the electronic device, the user's skin may come into contact with the insert portions to complete an electrical path. In this manner, a user's fingerprint may be measured.

In Apple's patent FIG. 4 noted above, we see a depiction of the bottom half of the iPhone's backside. In this embodiment, the product identifier #190 may be a word with multiple letters. Depending upon the desired language or font, a word symbol may include one or more letters with a counter, or other fully enclosed portion. For example, in the illustrated embodiment, three counters 150, 160 and 170 are shown within the English letters P, o and e. In such an embodiment, direct connections to a sensor or charger may be provided.

In Apple's patent FIG. 5 noted below we're able to see cross-sectional views taken along line 5-5 of FIG. 3 above, showing a sample electrical contact concealed within a product logo. 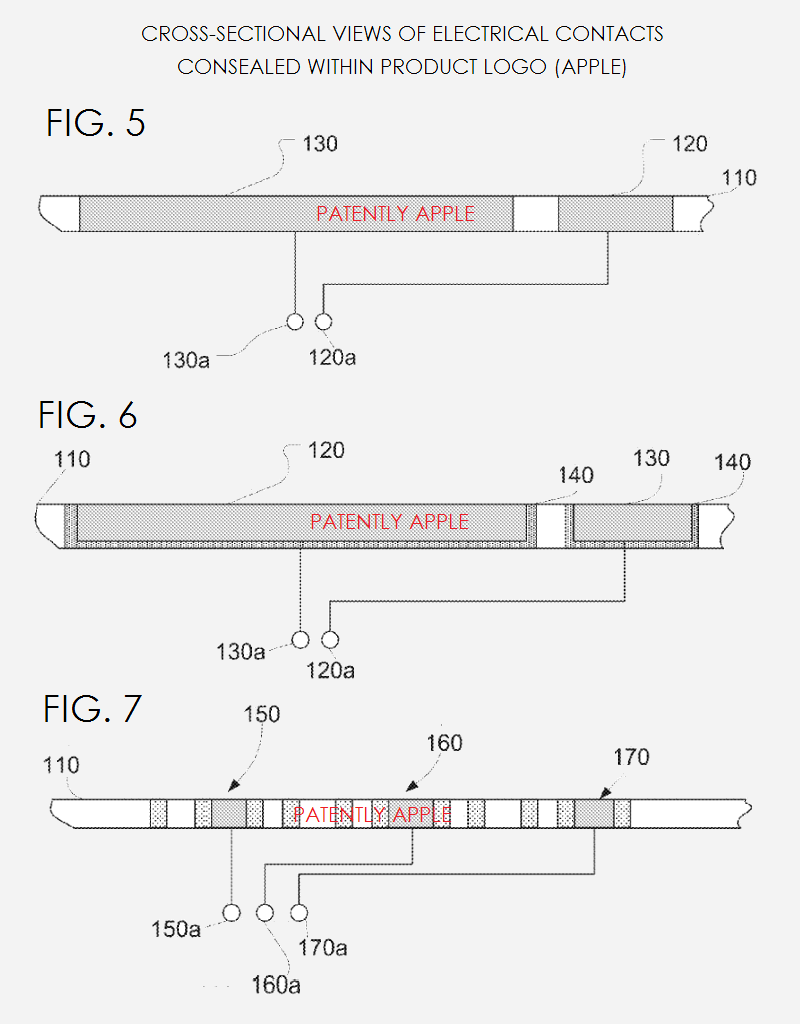 In an interesting twist, Apple elaborated on the circuitry that may be able to be used as a charging circuit for replenishing the charge of a battery within an iPhone.

The circuitry on the back of the iPhone for recharging would indicate that Apple is considering the design of an all-new iPhone dock.

In one last example of how Apple could hide sensors on the backside of the iPhone, Apple notes that one of the circuits could also be a heart rate monitor, or other sensor configured to sense a health parameter of a person holding or otherwise contacting the device.