Apple's introduction of Touch ID was made by Vice President of Marketing Phil Schiller during an iPhone media event on September 10, 2013. Touch ID is a fingerprint recognition feature, designed and released by Apple and is currently available on the iPhone 5S, the iPhone 6 and iPhone 6 Plus, the iPad Air 2, and the iPad Mini 3. Apple's engineers have racked up a number of Biometric related patents that you could review in our specialized Archives. They cover the possibility of Touch ID expanding to the Mac and may eventually evolve to so that the sensors are either behind an iPhone/iPad display or on the backside of these devices hidden in the Apple logo. Today, a new Biometrics related patent surfaced in Europe with a whole new approach to bringing biometric ID to the Apple Watch.

Apple invention relates to biometric identification based on Plethysmography. In examples of the present disclosure, light emitters and light sensors can be used to perform biometric identification of a user based on identifying characteristics of the user's vasculature. For example, light information can be obtained at one or more light sensors, and the information can be compared to stored information associated with a user identity. Based on the comparison, the user of the device can be identified as having the user identity.

Each light emitter may emit light towards the user's skin such that a portion of the light is absorbed by the skin, the blood, and/or other parts of the user's body, and an additional portion of the light is reflected back to the co-located light sensor. The light sensor may generate information indicating an amount of light reflected. Such information can be used to determine how much of the light emitted by a co-located light emitter is absorbed by the blood of the user, which can further indicate the volume of blood present in the skin of the user. The volume of blood present in the skin can be a function of several factors, including the cyclical movement of blood to and from the skin and the particular physical characteristics of the vasculature of a user, among other possibilities. 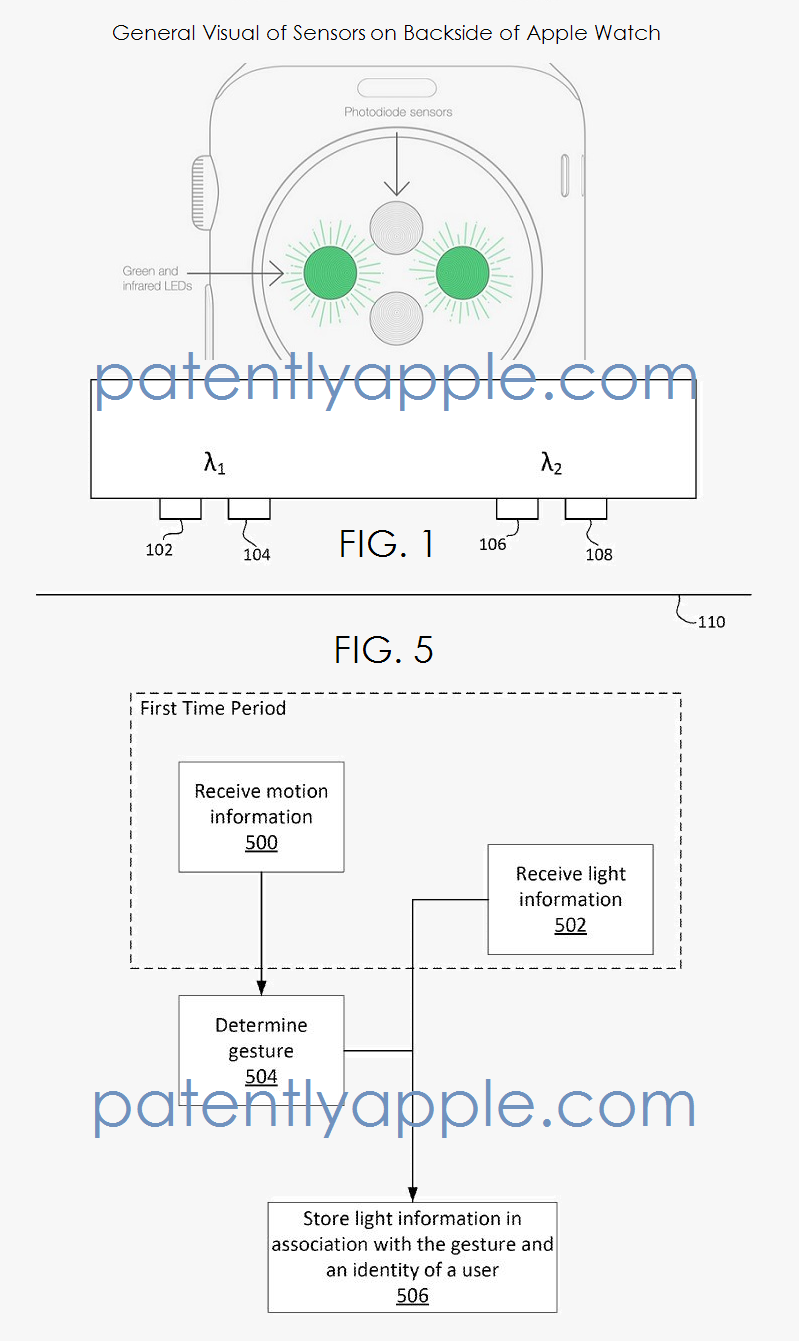 Apple's patent FIG. 1 noted above illustrates an electronic device that performs biometric identification according to examples of the disclosure. The top graphic with the four sensors is a generic graphic showing that Apple's FIG. 1 takes the shape of the backside of the current Apple Watch; Apple's patent FIG. 5 illustrates a method of storing identifying light information to be used in identification of a user at a later time.

Custom gesturing for the Apple Watch was also recently covered in a patent report regarding the sharing of information between two user's Apple Watches. So this is a consistent theme that Apple is working on.

Whether Apple's latest biometric ID system is to be used in conjunction with Touch ID or for another future application is unknown at this time.