On July 23, 2015, the U.S. Patent & Trademark Office published a patent application from Apple that reveals one or more novel motion-detected, tap-input methods for initiating one or more particular operations on a device such an iPhone and/or Apple Watch. In one example a user could set an iPhone in front of them and use the tap motion on an Apple Watch to snap the photo.

Many mobile devices provide various input mechanisms to allow users to interact with the devices. Examples of such input mechanisms include touch, tactile and voice inputs. Some of these devices, however, place restrictions on the input mechanisms that may slow down user interaction. For instance, typically, a device with touch-sensitive screen has a locked-screen mode that provides reduced touch-screen functionality, in order to prevent inadvertent interactions with the device. Such a locked-screen mode is beneficial in reducing inadvertent interactions, but this benefit comes at the expense of requiring the user to go through certain operations to unlock the locked screen. Accordingly, there is a need in the art for additional input mechanisms that allow a user quicker access to some of the functionalities of the mobile devices.

Apple's invention provides one or more novel motion-detected, tap-input methods for initiating one or more particular operations of a device. In some embodiments, these methods detect a tap input without relying on the output of a touch-sensitive screen sensor, which the device may or may not have. Instead, these methods detect the tap input by relying on the output of one or more other motion sensors of the device. Examples of such motion sensors include accelerometers, gyroscopes, and other sensors that generate output based on the movement of, or physical interactions with, the device.

Furthermore, in order to determine whether particular operations should be initiated, the methods of some embodiments augment the output data from the motion sensor data with output data from non-motion sensor data (e.g., with output data from the touch-sensitive screen sensor or with output data from the location identification sensor(s)). Also, in some embodiments, the methods specify different sets of rules for initiating different operations based on the motion-detected, tap inputs that are detected under different conditions. For instance, in some embodiments, each specified rule is based on either: (1) an external event and corresponding set of motion-detected, tap inputs that are detected after the external event, or (2) a particular orientation of the device and a corresponding set of motion-detected tap inputs that are received within a time period after the device has been placed in the particular orientation.

Apple's patent FIG. 1 noted below is an overview of an example software architecture of an operation initiator of some embodiments of this invention. 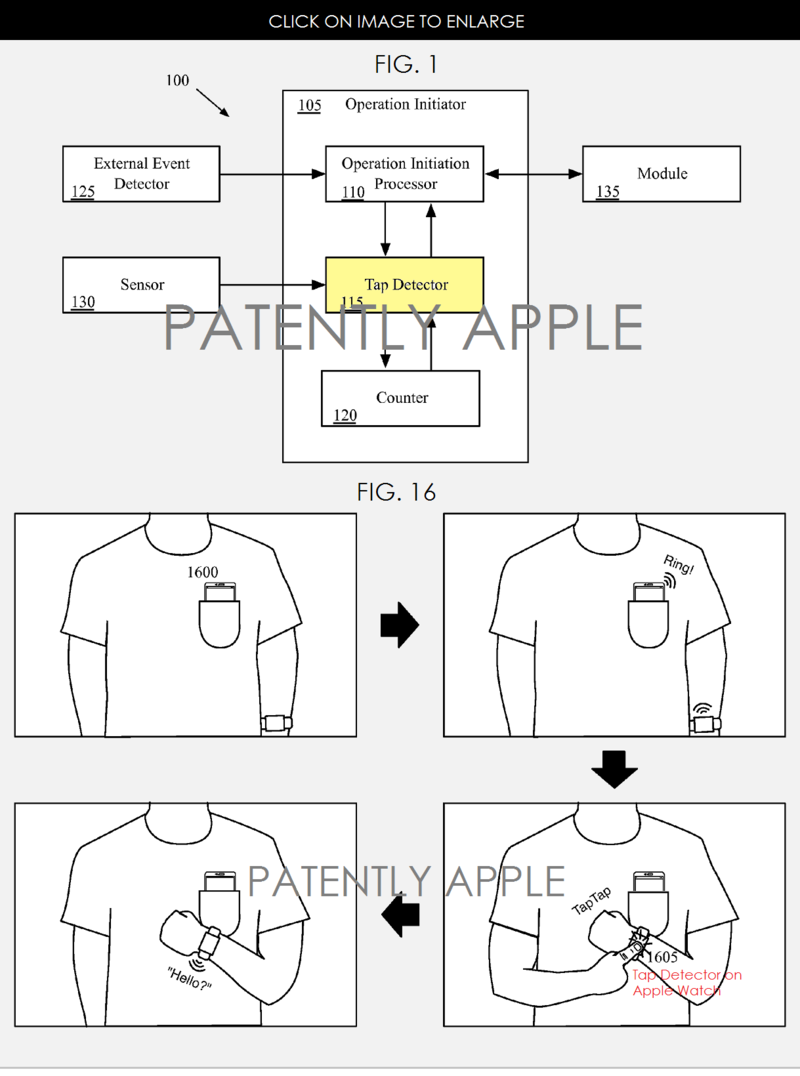 In Apple's patent FIG. 16 noted above we're able to see an example of detecting an external event on a first device, receiving tap inputs on a second device, and performing operations on the first device in response to the tap inputs. In this example, the first device is an iPhone while the second device is an Apple Watch that is communicatively coupled to the iPhone via Bluetooth. Also, in this example, the external event is reception of a phone call on the iPhone. In response to this phone call, a tap detector on the watch #1605 is notified to detect taps, by an operation initiation processor on the iPhone.

Even through the example in FIG. 16 relates to receiving an external event, one of ordinary skill in the art will realize that the tap detector of the watch could be directed to detect taps when the phone is placed in a particular orientation. For instance, in some embodiments, a user can place the phone upright or sideways on one of its sides, walk away from the phone, and then tap on his watch in order to direct the phone to take a picture or a video of the user, a group of people including the user, or a scene – as shown in patent FIG. 17 below. 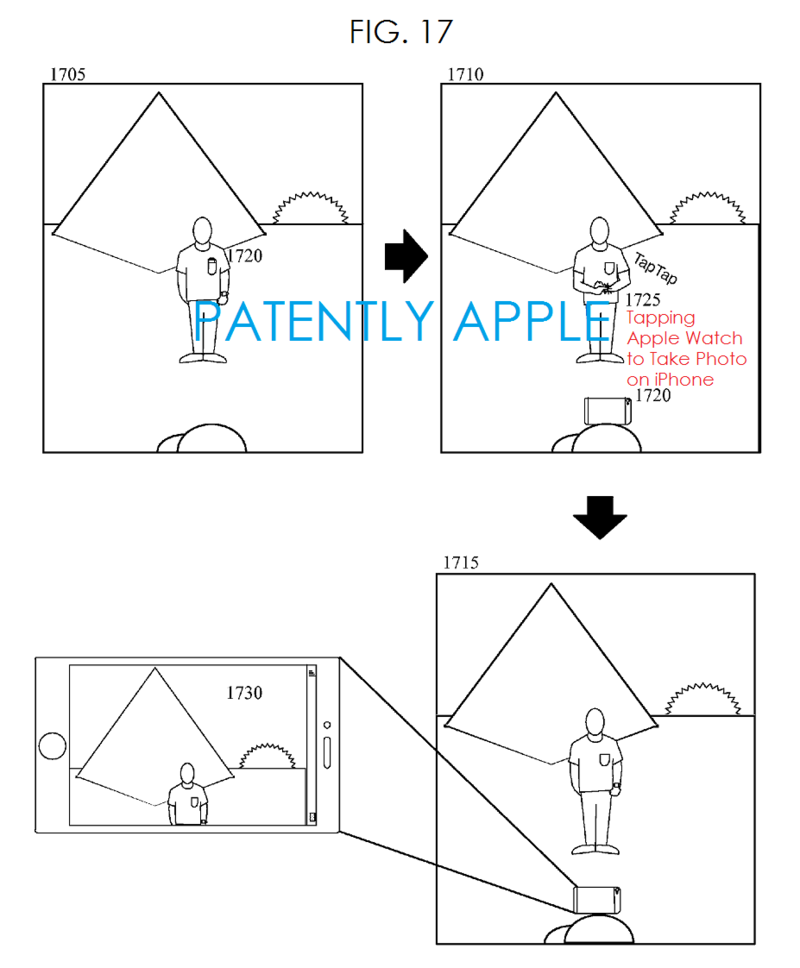 Apple's patent FIG. 17 illustrates one such example. Specifically, it presents (1) a first stage 1705 that illustrates a smartphone 1720 in the shirt pocket of a user, (2) a second stage 1710 that illustrates the smartphone 1720 placed on a surface in front of the user and the user tapping on a watch 1725 that communicatively couples to the phone (e.g., through Bluetooth), and (3) a third stage 1715 that illustrates a picture 1730 that the phone 1720 has taken in response to the detected tap inputs. The taps are detected in some embodiments by an accelerometer of the watch. Also, in some embodiments, the user can get a preview of the photo on the watch, because the phone in these embodiments sends to the watch a preview of the image that it is capturing through the connection (e.g., Bluetooth connection) between the phone and the watch. 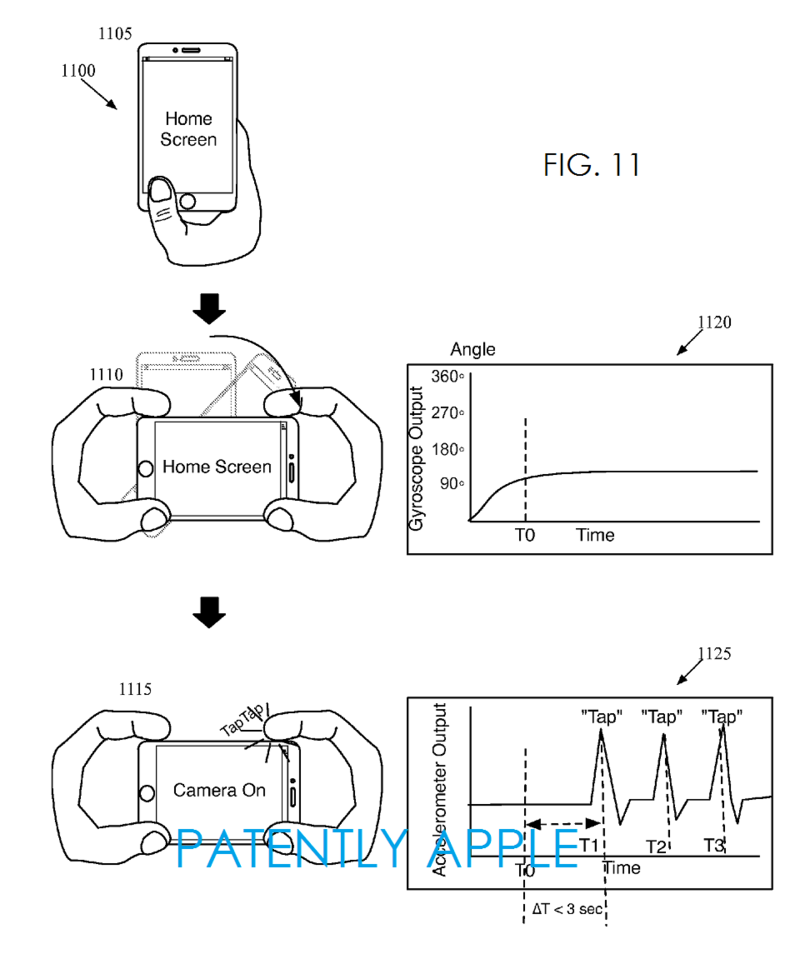 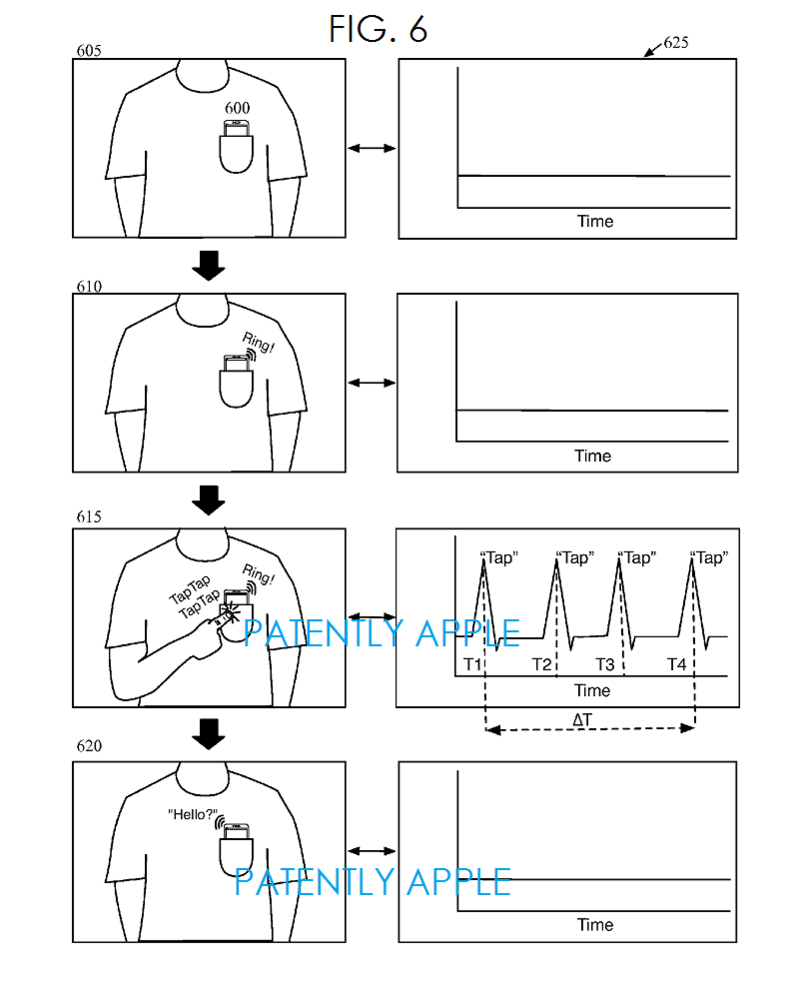 Other examples include setting snooze for tap controls, turning on a flashlight quicker and more.

Apple credits Stefan Mag and Matthew Rao as the inventors of patent application 20150205379 which was originally filed in Q2 2014. Considering that this is a patent application, the timing of such a product to market is unknown at this time.