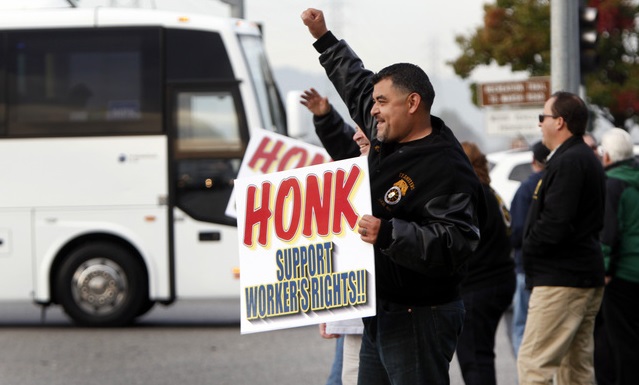 According to a new report published late this afternoon, Unions continue to make inroads into Silicon Valley. Shuttle drivers for Apple, eBay, Yahoo, Zynga and several other Silicon Valley firms are set to vote Saturday on a package for improved wages and benefits. The 160 drivers, most of them employed by Compass Transportation of San Jose, shuttle employees to and from those tech firms, as well as Amtrak, Evernote and Genentech.

According to USA TODAY, The drivers sought representation from Teamsters Local 853 after the union in February reached an improved contract for Facebook drivers working for contractor Loop Transportation. The contract that the drivers for Apple and the other firms will vote on has terms that are similar to those in the Facebook-Loop contract and, if approved, would serve as the union's final offer to management.

Terms include hourly pay increases to $21-$25, increasing to $22.50-$28.50 in three years, shift differential pay and a six-hour minimum for drivers who do not want to work split shifts, as well as contributions to a defined pension.

The Teamsters began negotiating with Compass and parent company Transdev nearly five months ago. "In our negotiations to date with the Teamsters, we have resolved the majority of the administrative terms, but we are still negotiating economic issues," said Bryan O'Connell, senior vice president at Compass Transportation, in a statement to USA TODAY. "Compass Transportation will continue to negotiate in good faith with Teamsters Local 853 to reach an agreement that is acceptable to our clients and employees." As those negotiations went on, Apple boosted the pay of its contracted drivers to match that of the Facebook drivers.

Rome Aloise, International Vice President and Local 853 principal officer stated that ""While Facebook has led the way in the fight to create decent wages and benefits in Silicon Valley, I fully expect other progressive tech companies like Apple to follow suit, seeing the value of helping bring their workers into the middle class." For more on this developing story, read the full USA TODAY report.