A Colossal Overreaction to Slice Intelligence's Data on the Apple Watch

A few weeks ago we posted a report titled "Apple's High-Tech Spin on the Razor-Blade Business Model is Paying Big Profits with Apple Watch Bands." In that report we covered data collected by Slice Intelligence that indicated that Apple was making a killing on Apple Watch bands. We also noted that Slice Intelligence reported that as of mid-June, Apple Watch sales were approximately 2.79 million units. We further explained Slice Intelligence's methodology of how they collected their data and noted that the figures may or may not represent Apple's true sales. There wasn't any crazy reaction to those sales numbers at the time until a chart based on Slice Intelligence's data surfaced that sent the tech sector into Dooms Day mode. You could reasonably look at that chart and ask yourself did Apple blow the Apple Watch launch? But going from that to Forbes comparing the Apple Watch to the disastrous Google Glass product was nothing short of a complete overreaction if not hysteria. 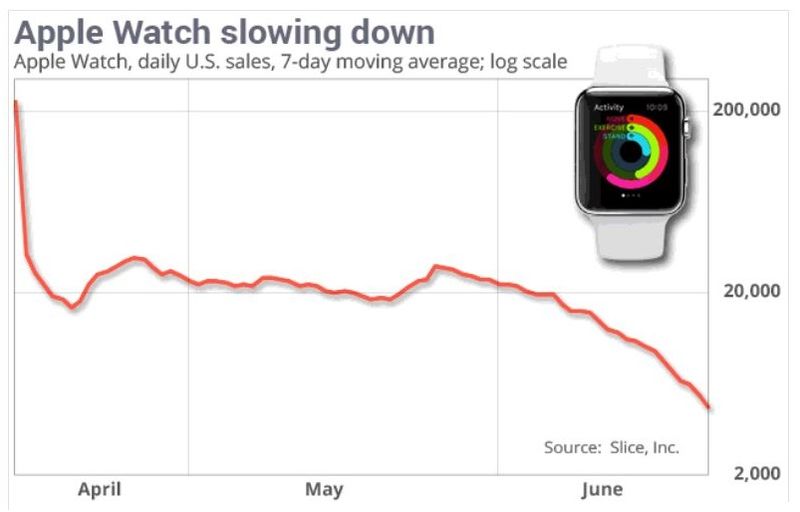 Of course it's not only Forbes. Yesterday Fast Company posted a report that was covered on Engadget titled "Why the Apple Watch is flopping." The report was basing its "flop" angle on a report generated by the very same Slice Intelligence data.

Once the writer established in his mind that that the Apple Watch was a flop, he then took the liberty of slamming the Apple Watch on two key fronts, namely it's "poor industrial design and a poor user interface/experience."

Considering that Apple's limited sales to date have already crushed Samsung's Gear (smartwatch) and all other smartwatches combined, I found it amusing yet confusing as to why Forbes decided to take Apple to task for being the number one smartwatch on the market today. Oh, right, that one chart from Slice. That one chart somehow has given every naysayer on the planet license to go negative on Apple.

In respect to the Apple Watch design, the Fast Company article started like this: "So how did this happen? The answer may sound like heresy to those who canonize—or even merely admire—Apple's designers. What if the Apple Watch, for all its milled and woven metals, all its appearances on the catwalk, isn't actually all that well-designed? So far, the Apple Watch doesn't seem very useful, and it hasn't proven that fashionable." On Fast Company's second point they state that "All of this culminates to the Apple Watch's fundamental flaw: it's a myopic masterpiece of industrial design, with microchips under curved glass held firm by Velcro-elegant magnetic clasps, so focused on fit and finish that it forgot about the software experience." Hmm, all of this ingenious flumadiddle stemming from a single data chart using Slice data.

Once again, the Fast Company report simply rehashed some of the earlier reviews of the Apple Watch from Forbes and others. First generational snafus are always pointed out in first generation Apple products like the iPod and iPhone and Apple has always gone on to fix them while advancing the whole device and future sales. It's an evolutionary process. This isn't news. For most Apple fans, this is like an old nursery rhyme. We know it in our sleep and smirk when the press strikes up the band as if it's a new tune: Yawn.

Though in the bigger picture, we have to acknowledge that there was a lot of hype as Apple was preparing to bring their smartwatch to market and crazy sales estimates bouncing off the wall by enthusiastic brokers. It was this stark visual imbalance of estimates in the 30 to 50 million unit range crashing to earth with Slice Intelligence's chart. That rang a bell in many heads and so it's understandable that some jumped on the bandwagon that the Apple Watch is now a flop.

In January AppleInsider posted a report titled "Apple Watch predicted to account for 36% of company's revenue growth in 2015." Was that super-hype or what? And though that's highly unlikely to come to pass, you never know what could happen over the Christmas quarter. Watches have always been great gifts and by fluke or design Apple may actually pull off a historic quarter for the Apple Watch and stun the critics. An Apple Watch supplier has already predicted a significant leap in Apple Watch shipments in the second half of 2015. So we'll just have to wait and see what transpires over the course of time.

Yet if anything, the chart based on Slice Intelligence's data did make it clear that Apple botched the introductory launch of the Apple Watch. From a one day blip to a crash, the chart proved that the launch was a failure extraordinaire. Not the product, but the launch.

Clearly Apple knew that they had major production problems and part restraints and still stayed on schedule. The lack of product meant a disastrous launching strategy with Apple Watches being sold in little European luxury Boutiques instead of having their traditional iconic launch in North America.

The Apple Watch hype began with Jony Ive hobnobbing with Karl Lagerfeld and Anna Wintour at an Apple Watch event in Paris. Jony Ive and Marc Newson later talked up the Apple Watch at the Conde Nast International Luxury Conference on April 22, just days before the official launch. The buzz around the Apple Watch launch was at fever levels and even had the Swiss Watch makers fearful of Apple Watch. So much so that one stated that the Apple Watch had the power to send their industry into an ice age.

By Apple rushing the Apple Watch to market, they failed to have a classic product launch with all of its standard hoopla and live coverage that we love to be a part of. Instead, Apple devised a stagnating experience with in-store reservations and having to buy the Apple Watch online. Apple's reservation system really didn't work as they envisioned. It was a total buzz-kill.

Apple decided to sell too many watch types with too many bands right out the gate. Apple didn't do that for the iPad or any other product line. Apple gradually evolved a product and added new lines like the iPad Air or MacBook Air. It was always in stride. With the Apple Watch, Apple buried us with too many choices making it too difficult to sell and complicated it with reservations to try it on.

Apple should have started with Apple Watch Sport and perhaps a couple of alternative bands. Focus on having the right inventory and having a massive iconic Apple product launch should have been the priority. Apple could have over time added Apple Watch and once all of the foibles were worked out, introduce the very high end the Apple Watch Edition. All in time, building on the product's success as Apple had always done for their most popular devices. Apple completely broke with tradition and it's come back to bite them.

Even with that said, I thought that Apple was going to try and stage a big comeback introduction of the Apple Watch at the end of June – but that never materialized. Production is still spotty and that tells me that Apple wants to reserve a classic North American roll out for the next version of Apple Watch.

In the end and in the short term, the data from Slice doesn't really show us that the product is a failure but rather that the product launch was. But even with a botched launch, Apple will still be able to set up the Christmas quarter just right which could turn their slower sales around in the blink of an eye.

Is the Apple Watch going to be another product failure like the Cube or the Apple TV box that was later dubbed a hobby product by Apple? No, I don't believe that will be the case at all. Yet how big a success the Apple Watch could be won't be known for years to come.

The bottom line is that the colossal overreaction by the press that was driven by a single statistical chart will likely come back to haunt them big time. Reality is that the Apple Watch is the number one smartwatch on the market today by a long shot. That's the story, that's the reality and the rest is just a circus gone mad.