The Success of the iPhone 6 is Depressing Korean Analysts

In late May we posted a report showing that there was a very mixed profit picture for Samsung Galaxy S6 suppliers that indicated that sales weren't unfolding as first hyped. Then in early June we reported that analysts were realizing that the Galaxy S6 was no match for Apple's iPhone 6. And finally last week we reported that the Galaxy S6 had no chance of stopping Apple's iPhone-6 mania. Today, a Korean report shows the frustration analysts are having with both LG and Samsung being unable to overtake Apple's iPhone 6.

Their thinking is rather simple. If delivering better specifications than the iPhone 6 can't stop it, then the fear is that there may be nothing that LG and Samsung could do in the short term to reverse this current trend.

The report notes that "Samsung Electronics and LG Electronics have ambitiously released their strategic smartphone models, the Galaxy S6 and the G4, in the second quarter of this year, and now both companies have expected positive effects from the new products. However, industry watchers say that the sales of their smartphones in the second quarter will be lower than expected. 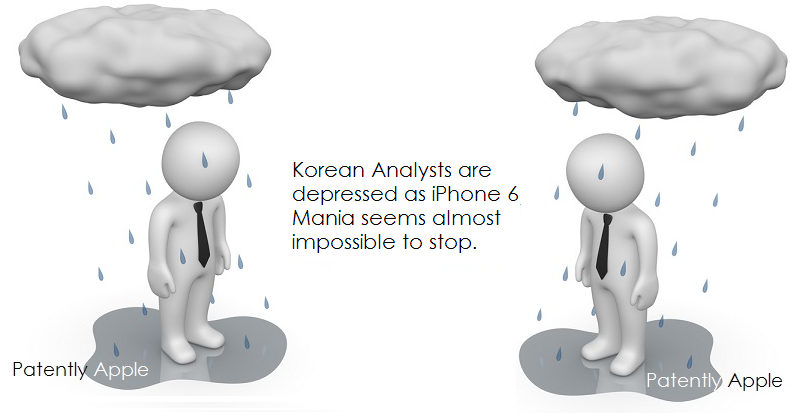 Since Apple is expected to release a new iPhone model in the second half of this year, all eyes are on domestic smartphone manufacturers whether they can change the situation of the global smartphone market competition by introducing a new strategy or new products that can increase sales.

The securities industry initially expected good performance in the second quarter due to the launch of the Galaxy S6. However, the industry has lowered a range of the improvement in sales performance as the actual sales fell short of expectations.

Some industry watchers say that the Galaxy S6 Plus will hit the market first or along with the Galaxy S6. Samsung Electronics' Galaxy Note, which is referred to internally as 'Project Noble,' is believed to have the same glass-covered metal body as the S6 series. It might be sporting an ultra-high definition 4K display for the first time in the smartphone industry."

If most consumers today can't distinguish the quality of a 2K from a 4K desktop display, why would such a ridiculous specification really matter on a tiny smartphone display? This is the problem with soulless hardware manufacturers. They think that by simply adding better sounding hardware specs that it'll automatically translate to the smartphone being perceived as a better product. Wintel played that marketing ploy to perfection until it no longer worked. Apple's holistic approach is killing them because Google's Android just isn't delivering a better smartphone experience.

In the bigger picture, Samsung has a killer smartphone design concept that could cause Apple some trouble. Yet Samsung has been working on this since 2009 and they just can't seem to be able to bring it to market.

LG and/or Samsung need to surprise Apple with a killer smartphone design as they did with the original phablet if they're to beat Apple's next iPhone. For the last eight months Apple's iPhone has beat the best that Samsung could throw at them and to no avail.

But going forward, Apple fans are now slowing purchases as they wait for Apple's next iPhone model that's due to arrive in September. And in that tiny window, Samsung is beginning to get a bit of brake. While the Korean analysts have been depressed over lower sales thus far, they may be getting a temporary ray of sunshine until the next iPhone arrives. Will Apple's next iPhone bury Samsung's mild comeback this fall? Only time will tell.