The same attorneys general office that was involved in the e-books price-fixing investigation against Apple is at it again. This time they appear to be pre-emptively looking into the terms of Apple's new music service for any signs of industry collusion before Apple Music is available to consumers at the end of this month.

This isn't exactly a new development as we covered the beginning of this back on May fourth. We noted at the time that The Verge had learned that Apple had been pushing major music labels to force streaming services like Spotify to abandon their free tiers, which would dramatically reduce the competition for Apple's upcoming offering. DOJ officials have already interviewed high-ranking music industry executives about Apple's business habits." The New York Times report is now expanding on that news.

According to the New York Times, "While Apple was preparing a splashy introduction for a new service that would stream music over the Internet for a fee, the attorneys general of New York and Connecticut were quietly investigating the Silicon Valley giant's negotiations with music companies in search of potential antitrust violations.

The attorneys general wanted to know whether Apple pressured the music labels — or whether the labels conspired with Apple and one another — to withdraw support for popular "freemium" services offered by companies like Spotify in favor of Apple's paid music subscriptions.

A freemium service typically starts free and is supported financially by advertising. Companies with freemium business models hope a free service is compelling enough to persuade consumers to pay for a more sophisticated offering — one typically free of ads.

The first written response to the antitrust inquiry came from Universal Music Group a day earlier when the company's legal firm, Hunton & Williams, sent a letter to the attorneys general (as noted in full below). The letter said Universal Music Group had no agreements with Apple or music entities like Sony Music Entertainment and Warner Music Group that would impede the availability of free or ad-supported services. 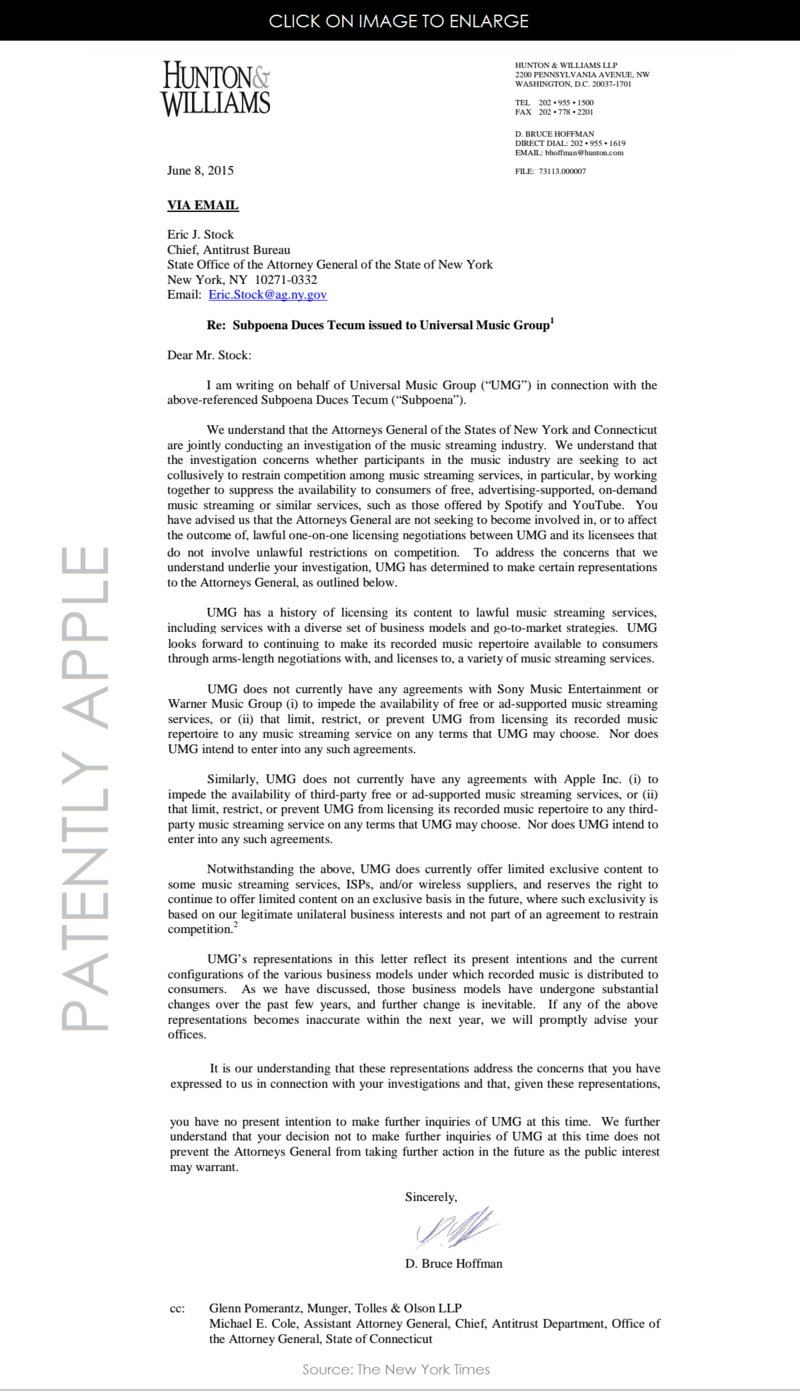 The New York Times adds that "The music company added that it "shares the attorneys general's commitment to a robust and competitive market for music streaming services in the mutual best interest of consumers, artists, services and content companies alike — and we have a long track record to that effect."

A spokesman for Mr. Schneiderman said the attorney general was looking into Apple's negotiations with music labels to preserve the benefits consumers have enjoyed from these new streaming services.

Unlike Spotify and other streaming music services, Apple does not offer a free version of Apple Music." Since when is it a crime to not offer a service for free?

In our May report we noted that the UK's the Guardian interviewed the CEO of Ministry of Sound Lohan Presencer who took aim at audio services such as Spotify, Deezer and Rdio. If Ministry of Sound's boss had his way, there would be no free option for streaming music services. Here Ministry of Sound is openly on record saying that freemium services hurt the music industry and those who are attempting to get young people to rightfully pay for music and yet it's Apple that's seen as the evil empire.

We followed up with a story in May that there was a dirty little secret in the music industry that the CEO of Ministry of Sound brought to light. He noted in a fiery and combative speech that the major labels were reluctant to license music services that adopt different models to Spotify, to protect their investments in that company ahead of its anticipated IPO.

Those investigating Apple now include European Regulators, the DOJ and the attorneys general of New York and Connecticut. Will these same entities investigate the music industry's little dirty secret of getting a piece of the action from Spotify, including their IPO before their IPO goes public like they're trying to Apple before it launches Apple Music?

The turnaround by some in the music industry is hypocritical. The Wall Street Journal noted back in 2014 that "One major-label executive said he regretted ever having agreed to allow licensees to offer any on-demand listening features free. '"In hindsight we made a mistake,'" he said.

Is Apple being unfairly investigated or is there proof that Apple has been trying to create an unholy cabal to take down freemium music streaming services? While only time will tell, you could read more on this story by The New York Times here.