On June 18, 2015, the European Patent Office published a patent application from Apple that reveals their invention related to the Apple Watch's Digital Crown. The patent reviews an input Friction Mechanism that provides the Digital Crown with its haptic feedback and more.

Electronic devices - such as mobile devices, mobile phones, tablet computers, music and multi-media players, wearable device, gaming devices, and other handheld, wearable or portable devices - have one or inputs such as buttons, touch screens, switches, and rotary inputs that can perform various functions.

With some rotary inputs or rotary controls, the present inventors have recognized that there may not be a mechanical stop or limit to a user rotating a rotary input, which can be problematic to the user experience.

Accordingly, as recognized by the present inventors, what is needed are mechanisms for providing tactile feel or feedback to the user when using a rotary input.

According to one broad aspect of one embodiment is an apparatus for an electronic device that provides haptic feedback by controlling an application of friction to a rotary input control with a shaft.

In one example, such as the Apple Watch illustrated below, may include a spring bar member positioned adjacent to the shaft; and a movable tension member positioned to engage the spring bar; wherein as the tension member engages the spring bar, the spring bar engages the shaft and applies haptic feedback in the form of a frictional force to the shaft. In this manner, the apparatus can controllably apply haptic feedback in the form of a friction force of a desired amount to the rotary input control.

Examples of electronic devices utilizing rotary control inputs with controllable friction mechanisms may include but are not limited to devices such as mouse input devices or a wearable communication device as shown in Apple's patent FIG. 8 below. 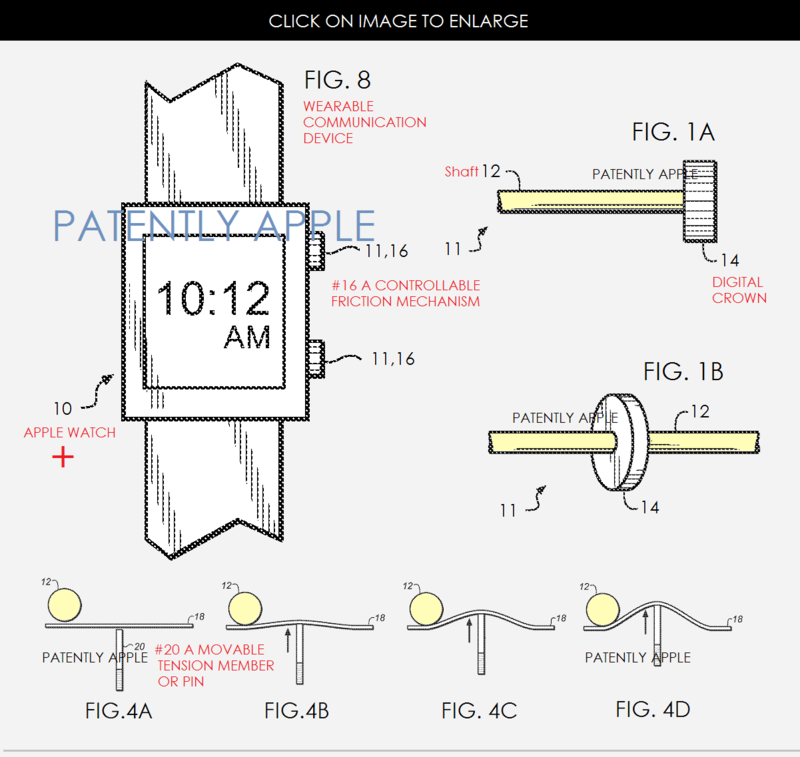 Apple's patent Figures 1A and 1B shown on the wearable device/Apple Watch, may include a rotary input or rotary control #11 having a shaft or stem #12 with one or more dials, wheels or crowns #14 coupled with shaft 12. 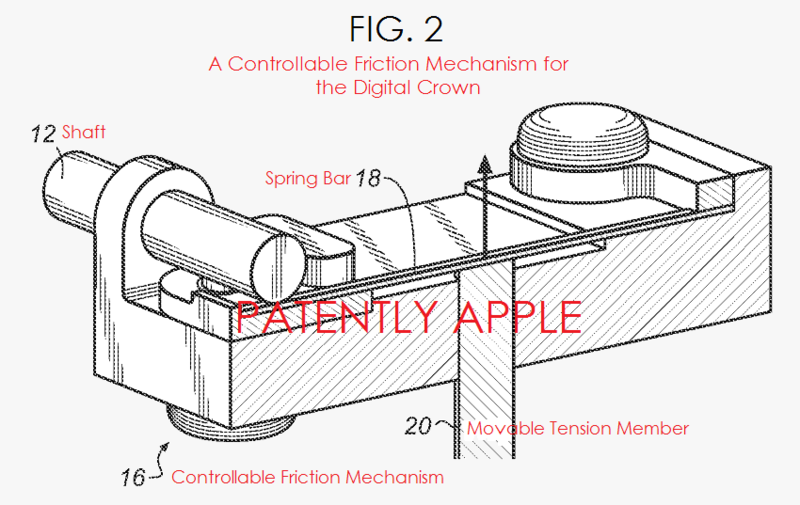 Apple's patent Figure 5 shown below illustrates an example of a block diagram of an electronic device having a rotary control input #11 with a controllable friction mechanism #16 coupled thereto. Apple notes that in one example, the electronic device may be configured in the form of a wearable health assistant that provides health-related information (whether real-time or not) to the user, authorized third parties, and/or an associated monitoring device.

The associated monitoring device may also be, for example, a wearable device, a tablet computing device, phone, personal digital assistant, computer, and so on.

Apple credits Interaction Design Engineer Camille Moussette (from Montreal). Another engineer who worked on the digital crown was referred to as the "Robotics Whiz" back in 2013. Everyone wanted to know what John Morrell was up to at Apple. Well, today that's answered in-part. He was working on the Apple Watch Digital Crown. The third engineer who worked on this invention was Patrick Kessler who has since moved on to Tyto Life LLC. Patently Apple discovered today's published invention in Europe. Apple's original international patent filing was made in Q4 2013 and made public today.