Samsung's winning hand against Apple's iPhone in the past was their phablet known as the Galaxy Note and specifically Apple not responding to this challenge in a timely manner. With the iPhone 6-Plus now rocking key Asian markets Apple is firmly ahead of Samsung's Galaxy S6 and S6 Edge sales. In order to get their shine back, Samsung is reportedly thinking of reviving their "big is better" tactic once again against Apple's iPhone. According to Korean sources, "Samsung Electronics is going to enlarge the screen size of their 'Galaxy S6 Edge' from 5.1inch to 5.7 inch." That would give the standard Galaxy S6 phones an easy to understand one inch leap over the iPhone 6 and even over the iPhone 6-Plus at a price lower than the 4.7 inch iPhone. That's bound to create a stir in the market.

On one hand the rumor sounds like something Samsung would do and on the other it seems a little too aggressive. Most females and teens can't comfortably hold a 5.7" smartphone, so it's hard to believe that Samsung would abandon their 5.1" model. It would make more sense to simply be adding a new S6 Edge model to the fold.

But that's the mystery to this rumor covered by a reputable Korean tech site. The 5.7" S6 Edge would in effect be displacing the next Galaxy Note, unless they go with yet a larger display – which sounds a little iffy. So it'll be interesting to see what's next for Samsung's updated Galaxy Note this September.

However, the strategy that was presented in the rumor is likely from the buzz that Samsung is to bring a foldable smartphone and tablet to market sometime in 2016. That's not a rumor, that's what Samsung's VP of Business Strategy Lee Chang-hoon stated back at a meeting held in New York in November 2014 for the top 200 Wall Street analysts.

Chang-hoon's revelation is likely to lead to Samsung delivering the next-generation Galaxy Note in a new form factor with a foldable dual display device. Samsung has been working on this for years. They first demonstrated their first prototype as far back as 2009 during a CES even (see the video of it in this report).

With Samsung thinking of upping the ante this fall with a 5.7 inch Galaxy Edge smartphone, it's becoming clearer that they're looking to reinvent their Galaxy Note and we know it's definitely going to involve a foldable display device.

Earlier this quarter a new Samsung patent came to light that reveals more of their advanced ideas pertaining to a foldable smartphone. One of Samsung's patent images can be seen below and you could read more about it in Patently Mobile's full report here. 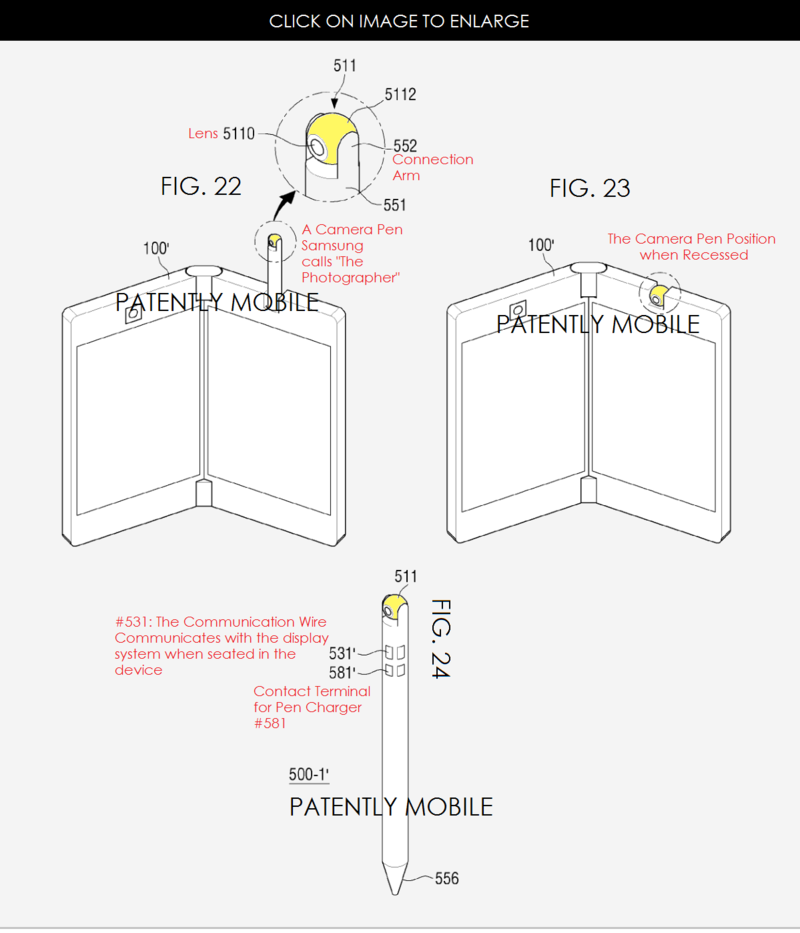 So it's a defined trend for one direction that next generation smartphones and tablets may go in the next few years. In fact the first dual display smartphone is actually on the market today in the form of Russia's YotaPhone. As the technology is refined and phones crafted to be much thinner, it's bound to be a viable and popular smartphone format for many consumers and professionals.

Yet at the end of the day, it's Samsung that has more in-depth patents on record for such a device and has given us a rough deliver time frame between late 2015 to late 2016 as to when we could expect to see this come to market. Failing to deliver on their promise to the top U.S. financial analysts would shake investor confidence and that's the last thing Samsung needs at this shaky point in time.

To date, we've yet to see a dual display based smartphone patent filing published by the U.S. Patent Office under "Apple Inc." That doesn't mean that Apple isn't parking such a patent under one of the names of their engineers that they're famous for doing to keep certain ideas from surfacing too early – but for now, at least on record, Apple isn't showing their hand if they think this is a trend worth pursuing. They will of course if Samsung's model ever comes to market and proves it could be a hit with the public like the phablet clearly was.

Then again, Apple technically was granted a patent for a dual iPad device back in March and the fine print of the patent Apple actually hints that it could apply to a smartphone. So the door is technically open a crack.

Apple's next round of innovations arrives this Monday at their World Wide Developer Conference. According to Apple's Phil Schiller, they've "got incredible new technologies for iOS and OS X to share with developers at WWDC and around the world." Will any of their newly acquired technologies from the likes of PrimeSense and others finally be coming to market? While only time will tell – that's only going to be a few hours away from now - so enjoy the show!

Note: Patent applications present concepts only. This isn't a design patent, so the final product, if there is to be one, will be thinner and slicker as a finished product.