Samsung and IBM Dominate Patent Activity in the U.S. in 2015 with Apple Falling Dramatically

Over the years, many in the Android community angrily pointed to Apple filing more patents than any other tech company for the simple sake of suing other tech companies. Of course that's simple hysteria that's not supported by the facts. Apple is sued by more patent trolls than any other company and they certainly don't file the most patents. In 2013 Apple was in the number 13 position and in 2014 they climbed to number 11. So far in the first five months of the year, Apple hasn't been able to crack the top ten for granted patents. For patent applications, they've dramatically fallen down the chart. Our report provides you with the charts that show you exactly where Apple currently stands. 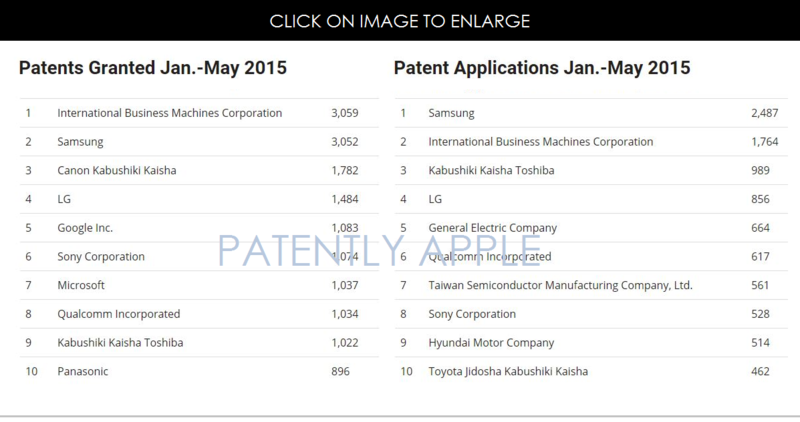 Samsung has battled the likes of Apple, Microsoft and LG over patents in court, using its IP portfolio to bolster its legal position. In respect to Samsung's patent volume, unlike Apple, they cover a much wider spectrum of products from televisions to medical devices to making components like batteries, flash memory and chips used by other companies including Apple.

In respect to Apple, their patent application filings have fallen off dramatically in 2015. We noticed that trend had begun in late 2014 and wrote a report about it. So the latest statistics from USPTO aren't all that surprising. Considering that we cover Apple's patent applications every Thursday, we have certainly felt the drop in quantity. Some argue there's been a drop in quality as well, but that would be a little subjective – as I remain somewhat convinced that Apple is parking their knowingly important new patents either under their engineer's names or filing them in countries that don't always provide public access.

Apple currently employs this tactic for many key trademarks. For instance, when the new "Apple Music" finally hits the U.S. Patent and Trademark Office database in the next few weeks or months, we're likely to find out at that time that Apple Music was originally filed in Trinidad and Tobago or Jamaica several months earlier. It's an IP shell game and nothing more.