Every once in a while an Apple patent application will surface in Europe that has bypassed the U.S. Patent Office for reasons unknown. Late yesterday Patently Apple discovered a patent application covering Apple Watch that specifically discusses a multi-modal physiological sensing system. In plain English, the patent is covering the Apple Watch Heart Rate Monitor. And, it looks as though Apple may be introducing a new method for compensating for motion so that users could perhaps one day jog and swing their arms without affecting the heart rate readings as they do today.

A photoplethysmogram (PPG) signal may be obtained from a pulse oximeter, which employs a light emitter and a light sensor to measure the perfusion of blood to the skin of a user. However, the signal may be compromised by noise due to motion artifacts. That is, movement of the body of a user may cause the skin and vasculature to expand and contract, introducing noise to the signal. Further, the device itself may move with respect to the body of the user, introducing further noise.

Examples in this patent filing are directed to a system for sensing and measurement of physiological signals that enables a signal decomposition approach to physiological measurements. That is, multiple signals may be obtained, and each signal may contain a physiological signal of interest (e.g., a heart rate signal). Each signal may also contain different noise components, and thus signal decomposition methods may be used to filter the noise and compute the signal of interest.

Multiple sensing modalities optimized for the signal decomposition approach may provide robustness against non­signal artifacts commonly induced in wearable sensors, such as motion- or biologically­ induced artifacts. Sensing modalities may include detection of physiological signals from optical sensors, force and pressure sensors, temperature sensors, accelerometers, proximity detectors, and/or impedance sensors, among other possibilities.

In some examples, sensing modalities may include optical sensors including light guides in contact and not in contact with tissue of a user. Because the signal of interest may be compromised by noise due to motion of the device with respect to the tissue and also by noise due to motion of the tissue itself (e.g., the expansion and contraction of tissue and vasculature), different noise may be captured by sensors corresponding to each of contacting and non-contacting light guides, and signal decomposition methods (e.g., blind source separation) may be employed to separate the signal of interest from the noise. 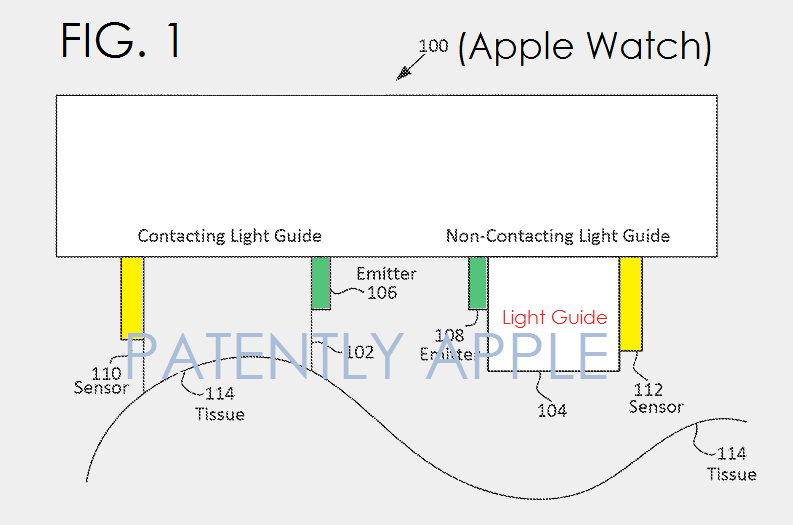 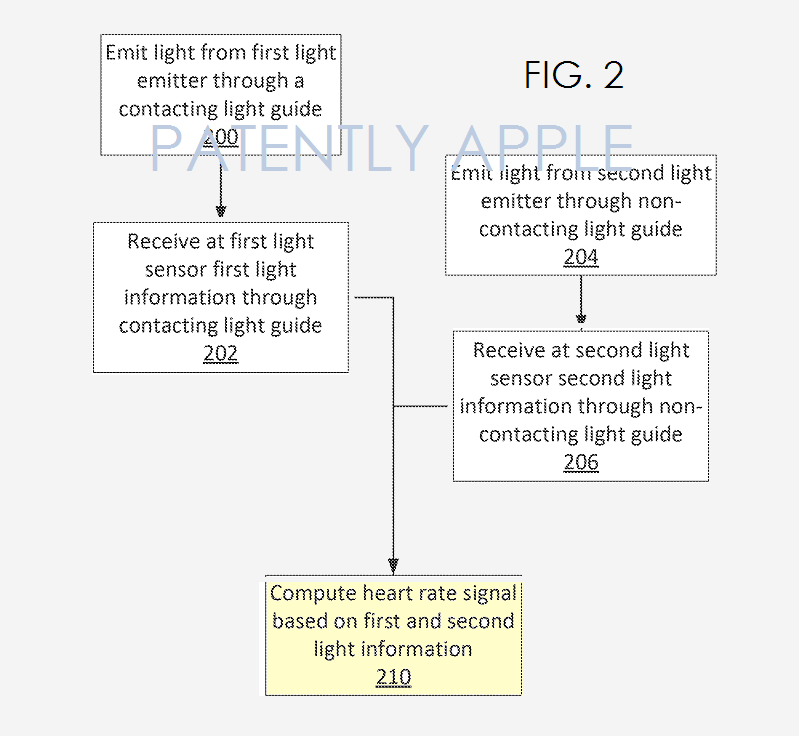 According to Apple, the light emitters may produce light in ranges corresponding to infrared (IR), green, amber, blue, and/or red light, among other possibilities. Additionally, the light sensors may be configured to sense light having certain wavelengths more easily than light having other wavelengths. 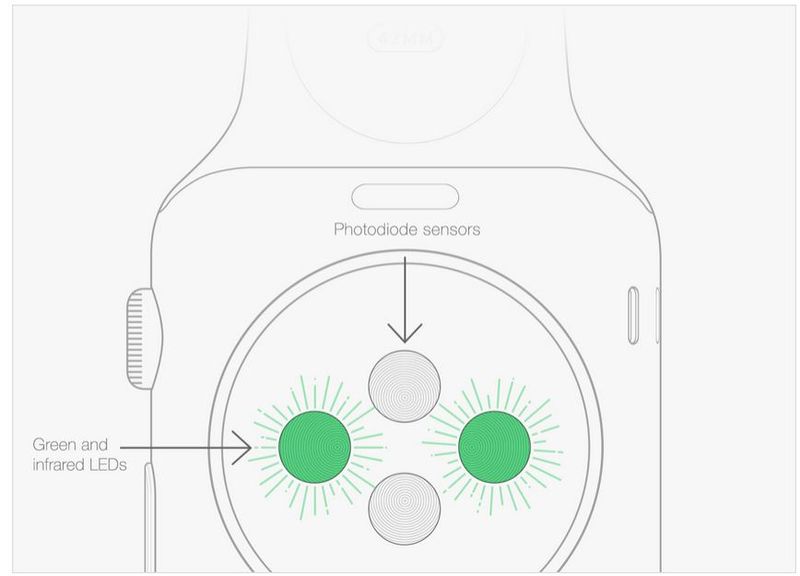 When going to market with Apple Watch initially, Apple explained that they chose to use green LED lights paired with light‑sensitive photodiodes to detect the amount of blood flowing through the wrist at any given moment. When the user's heart beats, the blood flow in their wrist — and the green light absorption — is greater. Between beats, it's less. By flashing its LED lights hundreds of times per second, Apple Watch can calculate the number of times the heart beats each minute — the user's heart rate. In addition, the heart rate sensor is designed to compensate for low signal levels by increasing both LED brightness and sampling rate.

This latest patent application filing from Apple sets out to compensate for any motion drawbacks interfering with the delivery of an accurate heart rate even while the user is in motion.

A Flowchart Method of Computing a Heart Rate

Apple's patent FIG. 3 noted below illustrates a method of computing a heart rate signal based on multiple wavelengths of contacting and non-contacting light information.

Within many of Apple's patents we'll find their engineers reveal ideas about the patent at hand that could apply to future products unintentionally. In this patent, the Apple engineer is talking about Touch I/O and states the following:

Having a touch screen as a trackpad on MacBooks would be interesting. Imagine being able to stay on top of your favorite sports team in action while you're working on a project at school or work while still having the trackpad fully functional. It would be like having a screen-within-a-screen trackpad. It could extend through to the Magic Trackpad for your iMac too. Of course there are many other possibilities you could come up with here with the trackpad doubling as a mini multitouch display.

If the Apple engineer is mentioning it generally in this patent filing, then it's likely something that the entire engineering team have been discussing over time as to where they could take the trackpad next. For now it's just an interesting future possibility.

Apple's patent application was published in Europe late yesterday. Apple credits Albert Wang, Optical Sensing Architect for this invention. Considering that this is a patent application, the timing of such a product to market is unknown at this time.