In 2005, Apple filed a patent for a very futuristic type of system that would be able to control a television or a display for a presentation that used a 3D holographic space in front of the user that would allow their hands to roam around as if they were touching elements on the screen. Think of adjusting volume or changing a channel on a TV or navigating the Apple TV interface to quickly choose a movie or tune without ever having to use a remote to move up, down or sideways on the display. You'd just point your finger directly at what you wanted and make a clicking gesture to choose it. A virtual keyboard would allow you to enter your passwords quickly without the clunky use of the remote. Imagine making a presentation with your hands being able to freely move elements on the screen like move a file or photo or even open files. Perhaps you'd be able to press on an on-screen button that's on a virtual iPhone in the presentation and it would actually work as if you were in the presentation. New simple in-air gestures would do away with a remote and go far beyond that old methodology altogether. This is what Apple filed a patent for and even updated it in 2014 and 2015 to demonstrate that the project may still be alive in either a Cupertino or Israeli lab. PrimeSense who invented the technology behind Microsoft's Kinect could very well breathe new life into this project. It's exactly what the foundation of the original invention was about. Where this technology could go in the future is mind bending. That's why Samsung had to mirror the idea in a recent patent filing.

Apple's patent FIG. 1 illustrated below presents us with embodiment representing the 3D imaging and display system. In one embodiment, the projection beam is utilized to project images onto the display area of various virtual objects that are characterized as being virtually located within the imaging volume or space. These virtual objects may include, for example, knobs, sliders, buttons, and so forth. 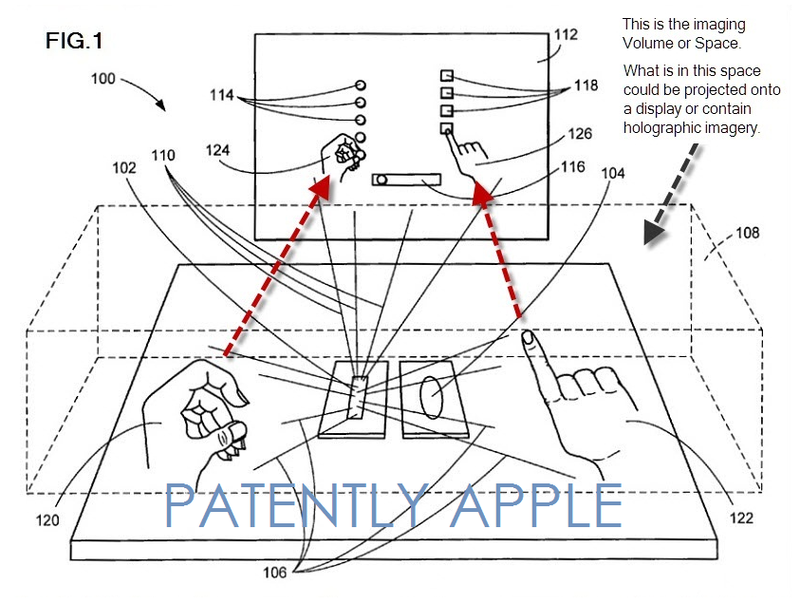 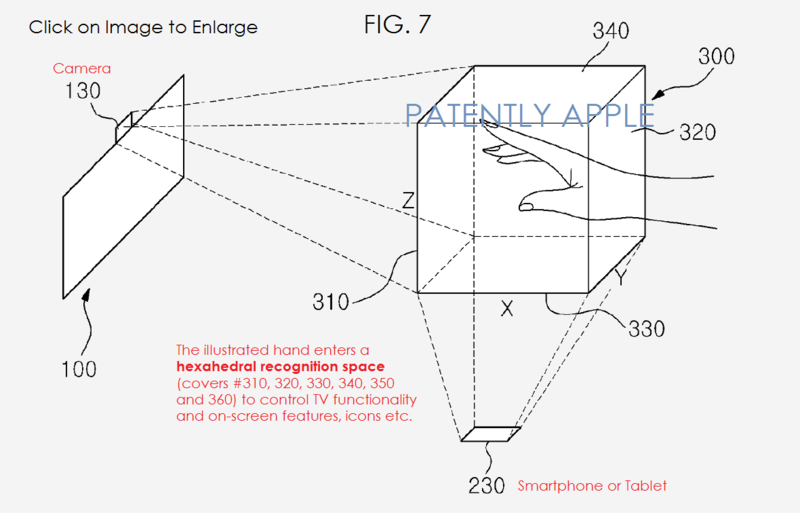 Earlier this month Samsung filed for a U.S. patent regarding a similar invention that Apple has on record. Instead of Apple's "imaging volume or space", Samsung describes the same thing as a hexahedral recognition space area #300 where the user interacts with a television with their hands using in-air gestures along with voice commands. The shape of course could be spherical or another shape the patent notes.

Samsung notes that "The display device (television #100 of FIG. 7) combines change information of the first and second images, determines that the image of the hand in the recognition space area #300 is moved down, based on the combined information, and determines the operation command with respect to the motion in which the hand is moved down."

The MOIP may further include a communication part (not shown) such as an Ethernet device. The microcomputer of the MOIP compresses the image signal and the sound signal, and transmits the compressed data to the first control part through the Ethernet device." The system will also use a virtual onscreen keyboard that the user will be able to use for entering passwords or sending an email and/or text message.

Once again Apple was miles ahead of the competition with this concept. Yet with Samsung being a leader in television technology, they might be the ones to actually bring this concept to market first. Not that being first mattered as we've recently seen with Apple Watch crushing the Samsung Gear smartwatch in terms of sales in days.

Of course I'm still hoping that it could be a race with Apple coming out on top, but it's looking like that could be a longshot at best. Then again, Samsung files more patents than Apple by a long shot and most never see the light of day. So only time will tell how this will play out.

For now, at least you now know that Apple had the idea first and that Samsung, well, pretty much copied the core of Apple's invention as we've presented it to you in this report. Not that this development will actually shock you in any way. It's just one more argument to make against the copycat King.