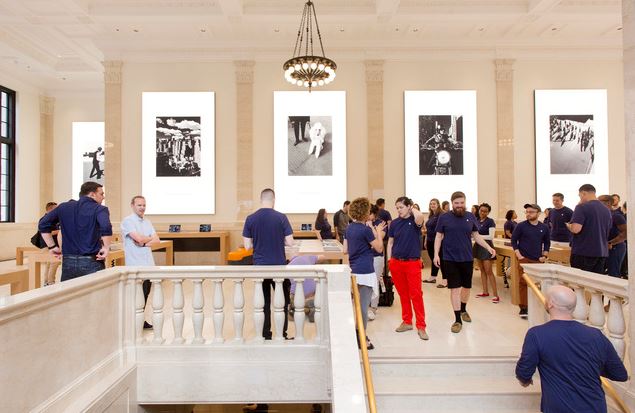 The latest Apple Store on New York's Upper East Side occupies part of a Beaux Arts building that originally housed the U.S. Mortgage & Trust bank. Apple sought to restore some of the building's old grandeur by reproducing the original chandeliers seen in old photographs, restoring marble floors and pilasters and turning a bank vault into a VIP showroom.

Apple's new Upper East Side store, which opens Saturday, has a marble entrance and no sign of anything Apple outside, save for a black flag with a white Apple logo hanging from the bank's original flag pole. While the store itself is small, tall ceilings and the usual open layout make it look spacious.

The entryway, stairs and other parts of the architecture are made of Botticino marble, the same Italian marble used at Grand Central and Penn Station in New York (and what was originally used in the bank). Six metal chandeliers -- reproduced to match the originals from old photographs -- grace the ceilings.

Mercury News creatively noted that "Downstairs, the heavily reinforced vault, complete with a massive steel door behind a set of steel bars, might remind visitors of an old gangster movie. This time, though, the door leads to a room for VIP customers, meetings and other purposes."

To create the newest Apple store to sell iPhones, smartwatches and other modern gadgetry, Apple took a look back at the 1920s. It's all part of Apple's effort to keep its stores distinct -- not just from other retailers but from each other. You could read more about the new store here.

About Making Comments on our Site: Patently Apple reserves the right to post, dismiss or edit any comments. Comments are reviewed daily from 4am to 6pm PST and sporadically over the weekend. Source