A non-practicing entity by the name of Evolved Wireless LLC has filed a patent infringement lawsuit against Apple over the lack of a license for a series of LTE patents that are part of the LTE standard. It's hard to believe that LG Electronics would ever sell their "standard essential" patent portfolio without some kind of backdoor to maximizing their intellectual property profits. Although Evolved Wireless has filed four separate cases against Microsoft, Samsung, HTC and Lenovo using the same patents, surely LG Electronics must have known that Evolve intended to use these patents against their display partner Apple. What a tangled web they've weaved. After being on the receiving end of NPE and competitor infringement suits many times, it appears that LG has decided to take a different approach to enforcing their LTE patents on smartphone makers. Will this tactic work? Only time will tell.

In the Evolved Wireless case before the court against Apple, they began their argument by providing a "background" of their case that focused on the Third Generation Partnership Project ("3GPP") which develops standards for globally-applicable commercial cellular systems.

They further noted that "3GPP participants must abide by the intellectual property rights ("IPR") policy of the Organizational Partners to which they belong. These IPR policies, such as the ETSI IPR policy, are intended to strike "a balance between the needs of standardization for public use in the field of telecommunications and the rights of the owners of IPRs. IPR holders whether members of ETSI and their AFFILIATES or third parties, should be adequately and fairly rewarded for the use of their IPRs in the implementation of STANDARDS and TECHNICAL SPECIFICATIONS."

Apple, or its subsidiaries, is a member of ETSI, and was a member during the relevant period when LG declared the LTE Patent Portfolio to ETSI.

The 3GPP Working Group meetings evaluated competing technologies that could best serve the essential functions necessary to standardize wireless communications. Upon information and belief, Apple has not participated in the 3GPP Working Group meetings, although Apple has taken advantage of the system and has been successful in the LTE device market.

Apple has not entered into a license agreement with Evolved Wireless for the LTE Patent Portfolio.

The Five Counts against Apple

Evolved Wireless alleges that "Apple has infringed, induced infringement, and/or contributed to infringement of the '916 Patent by making, using, selling, offering for sale, or importing into the United States, or by intending that others make, use, import into, offer for sale, or sell in the United States, products and/or methods covered by one or more claims of the '916 Patent, including but not limited to cellular telephones, tablet computers, and/or other devices with LTE capabilities and that comply with the LTE standards, including at least TS 36.211, .300, .321, .331, and .423." 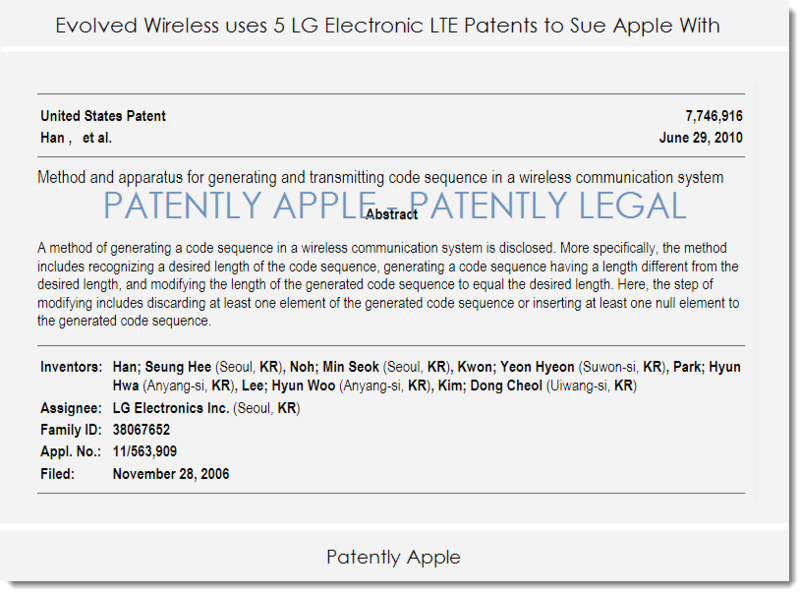 The patent infringement case presented in today's report was filed in the Delaware District Court, Wilmington Office, New Castle. At present, no Judge has been assigned to the case.