Two weeks ago we posted a popular report titled "New Apple Watch Patent Covers Wearable Multi-Modal Physiological Sensing System." Apple's European patent filing was to address an established shortfall of Apple's heart rated monitor. According to Apple's Apple Watch literature, "The heart rate sensor can also use infrared light. This mode is what Apple Watch uses when it measures your heart rate every 10 minutes." However, Apple later notes that "Apple Watch attempts to measure your heart rate every 10 minutes, but won't record it when you're in motion or your arm is moving." Our report presented the advancements being contemplated to fix this shortfall. Earlier today we discovered yet another newly published patent application from Apple in Europe. This time around Apple takes a different approach to solving this problem by introducing us to a new tilt effect sensor and much more.

Apple notes that some conventional portable electronic devices can be worn or otherwise attached to a user and provide functionality related to the physical activity of a user. For example, many conventional wearable devices can monitor the heart rate of a user.

However, conventional devices are limited in their functionality, and their accuracy can be limited by changes in the distance of the user with respect to the wearable device.

Apple's patent figures 3A-3B noted below illustrate a cross-sectional view and a view of the underside of a possible future Apple Watch (referred to in the patent as "an exemplary portable/wearable electronic device") configuration that includes a combination of light emitters, optical sensors, and electrodes. 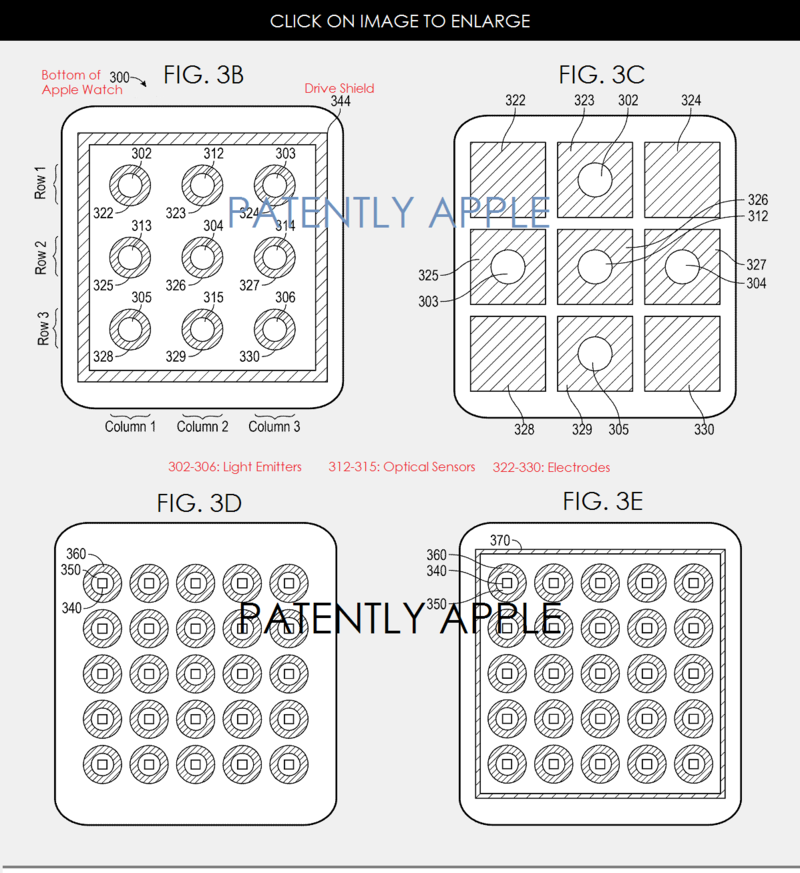 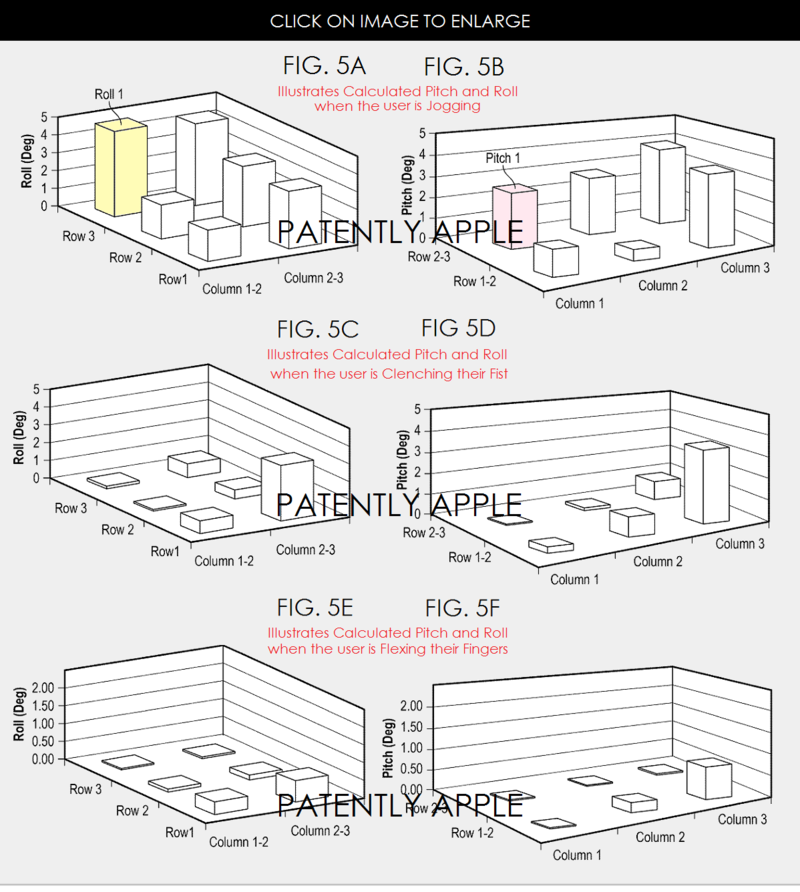 Apple's patent Figures 5C and 5D illustrate calculated pitch and roll angles when the user is clenching their fist.

Apple's patent Figures 5E and 5F illustrate calculated pitch and roll angles when the user is flexing their fingers. Based on one or more of the pitch, roll, and contour map, the device can determine or at least predict physical activities being performed by a user.

In Apple's patent figure 6 we're able to see a flowchart of an exemplary process flow for calculating the distance and rotational angles of an exemplary portable electronic device relative to a user. Process #600 can begin at #602 where the capacitance or change in capacitance can be measured at one or more electrodes. At #604, the distances from the electrodes to the body part can be calculated based on the measured capacitance values. At #606, one or more pitch and roll values can be calculated from the calculated distances. At #608, a contour map can be generated. At #610, the device can optionally determine or at least estimate the user's physical activity and intensity based on the pitch and roll values and the contour map. 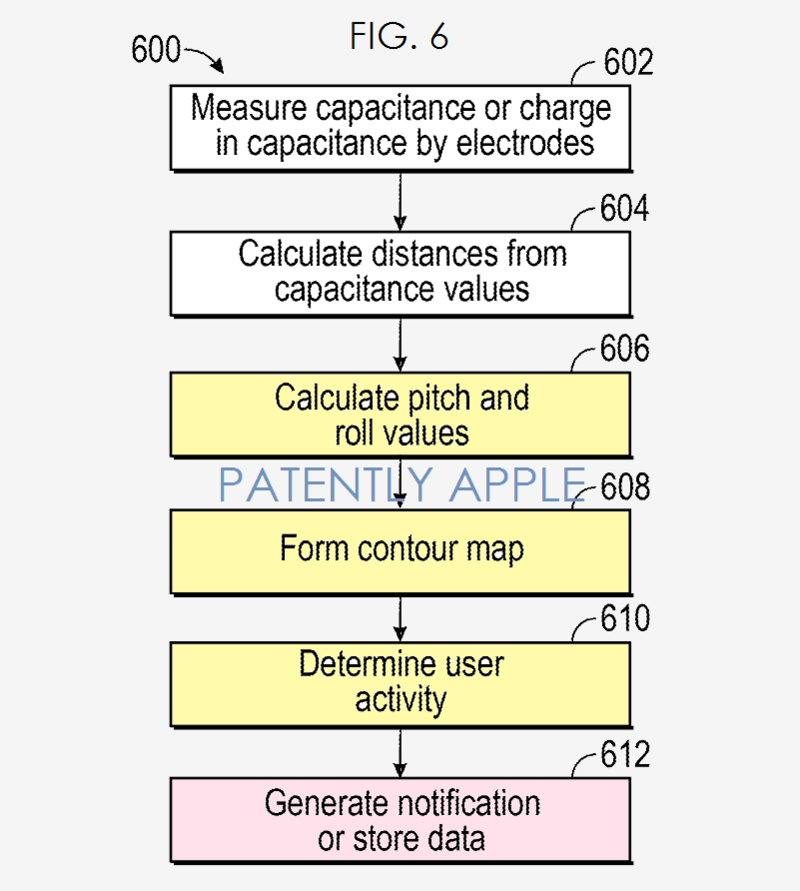 At #612, the device can optionally generate a notification to the user or store the information for future purposes or historical tracking. For example, for a user undergoing physical therapy for a tendonitis issue, the device can notify a user of excessive wrist movement based on one more of the distance, pitch and roll information that exceeds magnitude and/or duration thresholds. The device can track the user's movement over the course of a certain timeframe, and a doctor can use the historically tracked information for therapy purposes.

In another example, the device can utilize one or more of the distance, pitch and roll information to detect low intensity trembling or shaking and correlate the movement with excessive stress. In response to this detected movement, the device can notify the user to relax or play relaxing music to calm the user down. 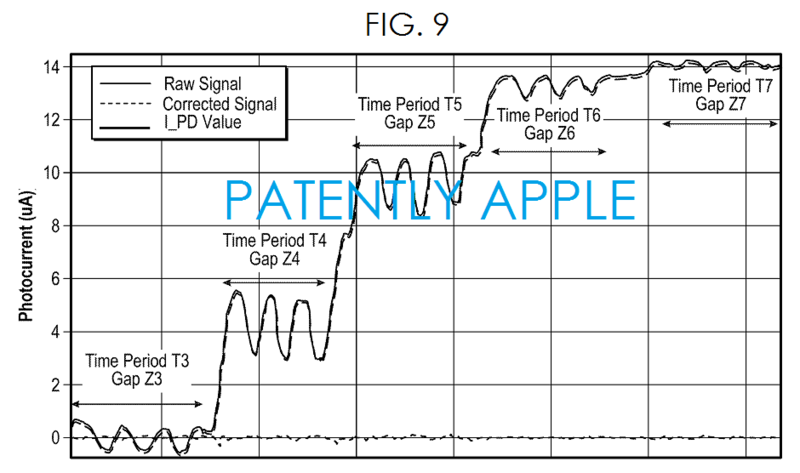 Apple's patent application was published today in Europe. Interestingly to note that one of the Apple engineers listed as an inventor used to work at Maxim Integrated that works with automotive industry players in regards to advanced infotainment systems that include integrated TV tuners and beyond as noted below. 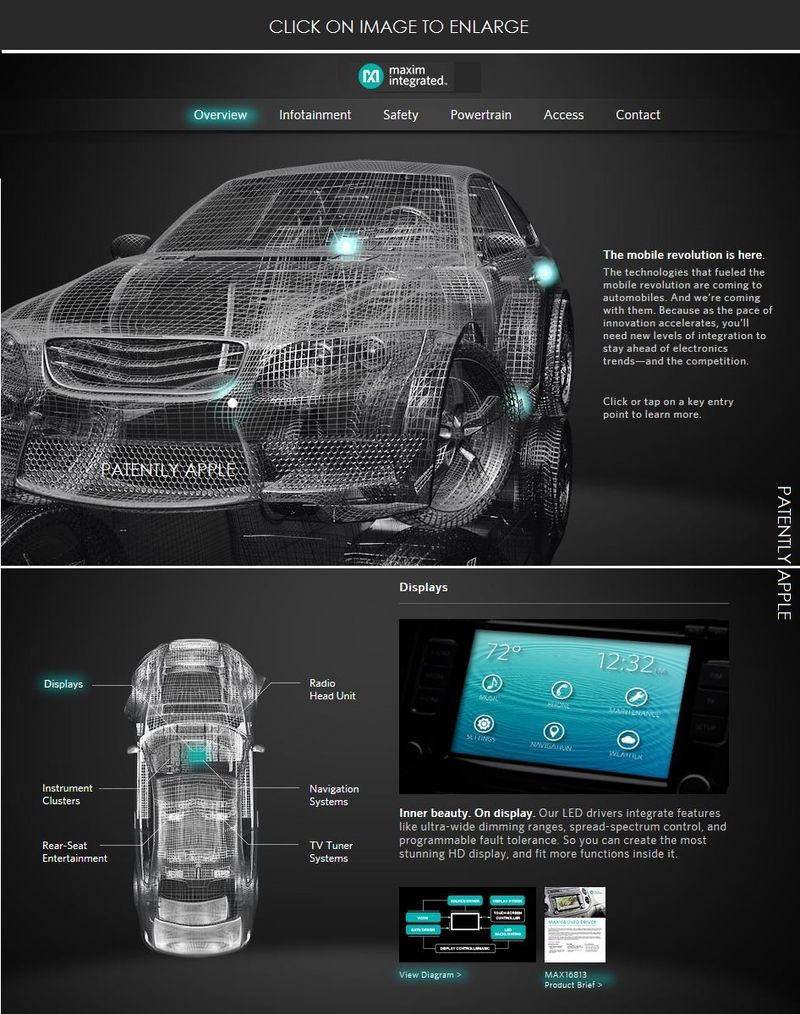