Home Archives Contact Us Subscribe Twitter MeWe Facebook Patently Mobile
While Apple Watch Sales are Slowing, they're Likely to Rebound Once they Land in Apple Stores in June
Could Samsung's Newly Revealed Weapon Challenge Apple's iDevices in the Enterprise?

Yesterday we posted a report titled "A new Report is claiming that Samsung's S6 is looking like another Disaster in the Making." In that report we noted that it was beginning to appear that Samsung's Galaxy S6 sales were imploding. Today, more evidence is surfacing from the Korean press that with S6 supplier profits being down on average, the new smartphone isn't the winner that they were hoping for.

In a new Korean press report published today they concluded that "The combined sales of the 21 listed companies which supply parts and components for Samsung's Galaxy S6 rose 2.2 percent, while their combined operating profit fell 2.3 percent year on year. This can be interpreted that the effect of the Galaxy S6 was not that big."

The report noted that suppliers such as Patron, Cammsys, and Chemtronics reported lower-than-expected results, indicating that the Galaxy S6 yielded mixed trickle-down effect. Some suppliers enjoyed 20-percent growth in the first quarter.

While we'll have to wait for Samsung's official numbers to be made public for Q2 before declaring the S6 a dud, the evidence appears to pointing to a disappointing quarter for the Galaxy S6. Considering that Samsung basically copied key design ideas from Apple once again, it's surprising that it hasn't been selling any better than it has. Then again, I guess by copying the iPhone too closely, consumers are deciding to buy the real thing instead.

In stark contrast to the dark cloud over the suppliers of the Samsung Galaxy S6, a report published by the Financial Times on Sunday shows us how many Apple iPhone suppliers are rocking this year!

With iPhone sales up 40 per cent year on year in the first quarter, Murata — a Japanese producer of energy-storing ceramic capacitors that counts Apple as its biggest customer — said its operating profit rose 116 per cent from a year earlier.

Earnings at Taiwan’s Largan, which supplies iPhone camera modules, were up 61 per cent, while those of the South Korean iPhone screen supplier LG Display were almost eight times the level of a year before.

The booming earnings in Apple’s supply chain demonstrate the impact of smartphone market shifts on the web of Asian component suppliers and assemblers that are the bedrock of the industry. 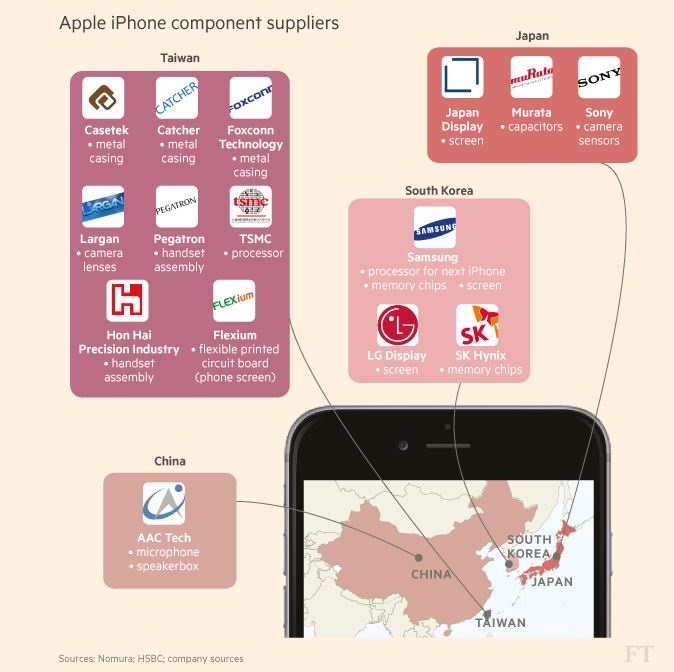 This is what a successful smartphone will do for suppliers – boost their bottom line. We're not seeing that with those who are making parts for the S6 – end of story.