In February we posted a report titled "A Major Report by Good Technology Shows that iOS Activations in the Enterprise Climbed to 73% in Q4 2014 and Much More." Today, Good Technology released their Q1 2015 report covering the latest data in app, platform and device preferences in the enterprise. Good Technology is uniquely positioned to provide insight into the adoption of new mobile apps, platforms and devices due to their diverse global customer base that includes FORTUNE 100 leaders across a wide range of industries. Starting off the report we're able to see from the very first graphic below that iOS was able to maintain its market share leading position in the enterprise due to the surge in the iPhone 6's popularity spilling over to Q1 2015. 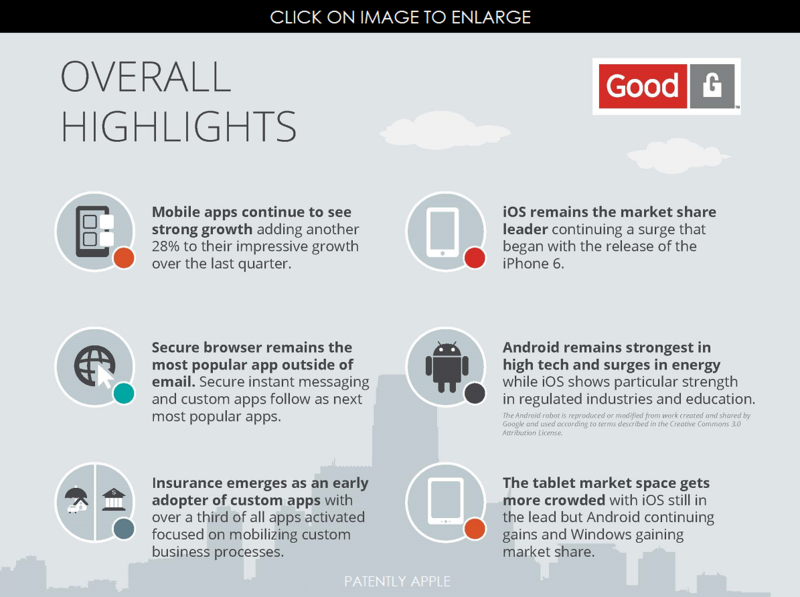 Of Course, some of Apple's strong growth in the enterprise is due their alliance with IBM and you could follow the developments of their MobileFirst initiative here which could keep you up to date on new Apps various market segments.

In particular, the MobileFirst Alliance covers Healthcare, Industrial Products, Banking and Financial, Travel and Transportation and Insurance which the Good Technology report notes in the graphic above that over a third of all app activations came from this sector and its business processes, specifically claims processing. In the first Quarter 34% of all apps activated by insurance organizations were custom apps.

Another key area for the MobileFirst alliance is the Banking and Financial Market sector. Here, Good Technology notes that the top category of apps for this vertical was secure instant messaging, accounting for 27% of all apps activated by financial services firms. The report didn't mention whether iOS, Android, Windows or Blackberry was leading in this area.

Business and professional services represent a wide variety of ﬁrms, from law ﬁrms to consulting services to accountancies. However, the unifying factor of this disparate set of businesses is that each of them works on business docs. The areas of strength in this market segment indicate that secure browsers, document access and document editing made up 64% of all apps deployed.

In the manufacturing sector, the browser was king with 47% of all app activations.

As noted in Good Technology's graphic below, "iOS retained the top spot for device activation, dropping a single percent to 72% of all activations." They further noted that "Apple's iOS has maintained a market share of over 70% since the introduction of the iPhone 6." 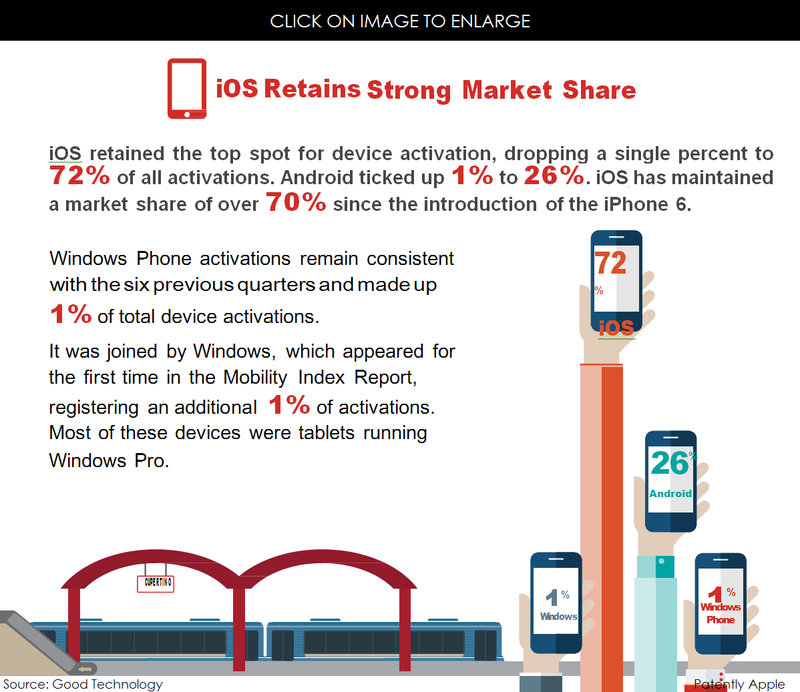 Apple's iPhone 6 was the Most Popular Device

The report further noted that "The iPhone 6 remained the most popular device overall, making up 26% of all activations in Q1 2015. 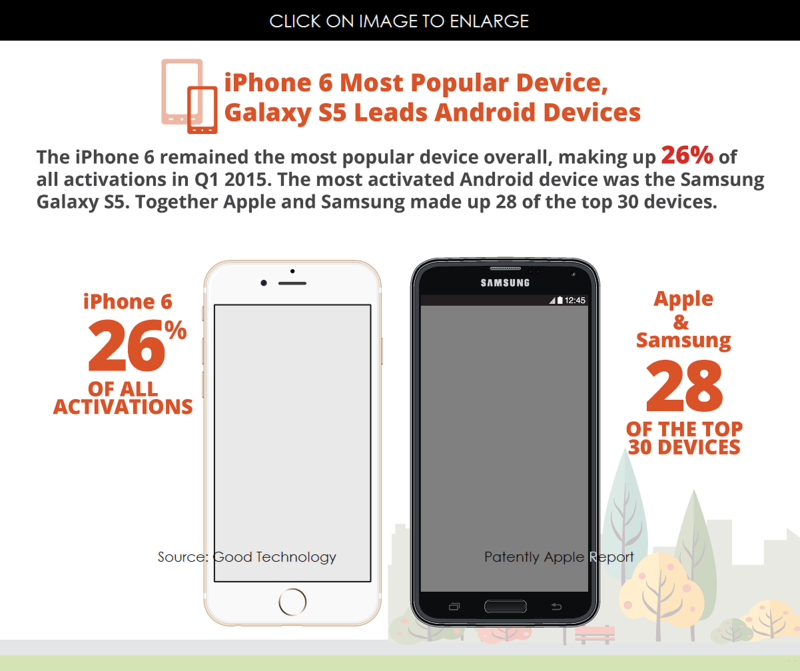 Despite the fact that Apple's iPad sales fell year-over-year in Q1 from 16.4 million units in 2014 to 12.6 million units, Good Technology still acknowledged that iOS remains the leading tablet OS in the enterprise with a whopping 81% of all activations in Q1 leaving Android and Windows in the dust. 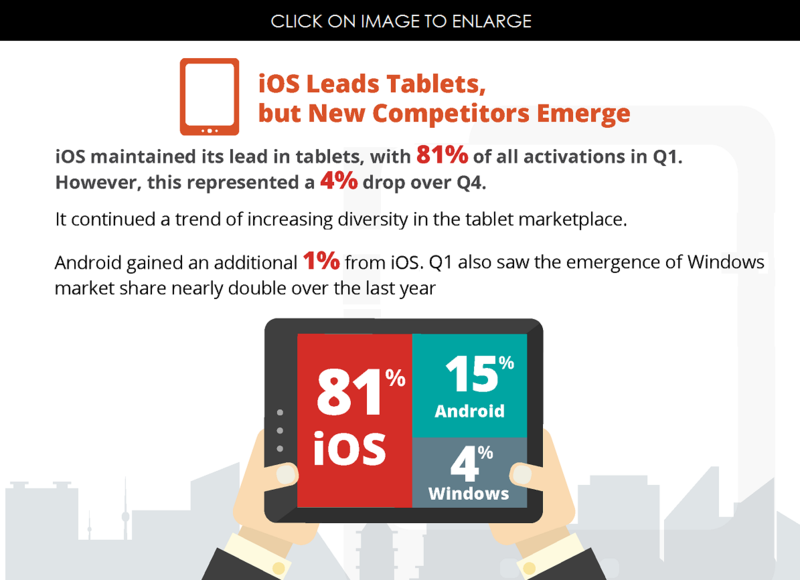 Good Technology's report further notes that "Device adoption varies signiﬁcantly among industries. For the second quarter in a row, iOS signiﬁcantly outpaced Android in regulated industries. Despite claims from Apple's competition, the facts show that Education is a stronghold of Apple's. 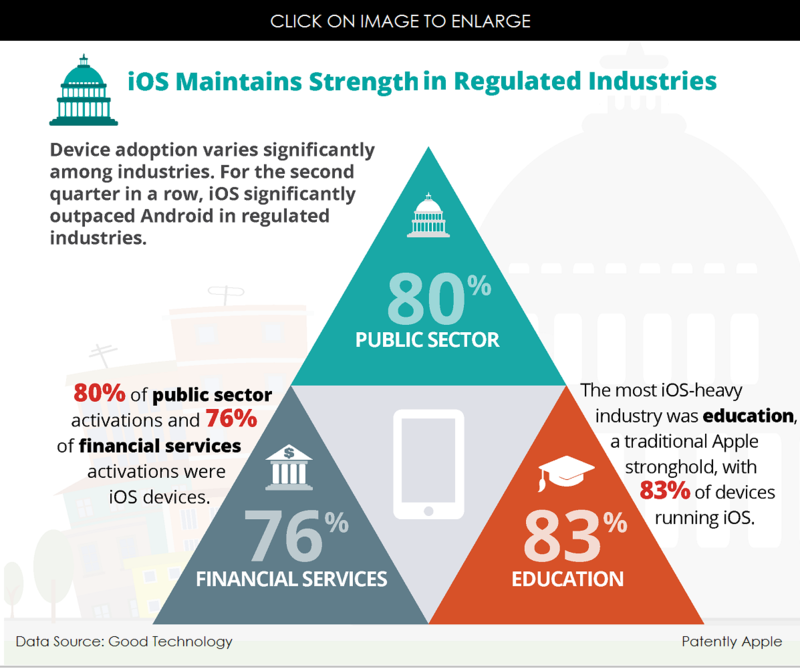 Where Android's strength resides is in the sectors of High Tech and Energy. Here Android leads with 47% and 44% respectively. The Energy sector will be interesting to follow going forward as it's on the key new areas that the MobileFirst alliance is now focused on for custom apps.

While Microsoft's Windows may gain ground over the next five years starting with Windows 10 spanning over many new devices including smartphones in late 2015 going forward, their statistics today are anemic and not worth noting at this point in time.

In the end, we see that Apple, once basically known for being a consumer-only company, has strategically entered the enterprise through the strength of their popular iDevices (iPhone, iPad) due to corporations adopting Bring your own Device (BYOD) policy.

According to a Wikipedia report, BYOD is making significant inroads in the business world, with about 75% of employees in high growth markets such as Brazil and Russia and 44% in developed markets already using their own technology at work.

And now with Apple's alliance with IBM via MobileFirst, they'll be able to fortify their position in the enterprise. To date, with intelligent studies by companies like Good Technology, we're able to statistically review Apple's enterprise strengths in detail.

The metrics cited in this report have been directly generated from Good's internal data, as aggregated from all devices activated across Good's worldwide customer base in Q1 2015. Good analyzed activations, by month, among all its global customers that had at least five activated devices over the quarter, to draw conclusions on the overall trends for net new activations across iOS, Android and Windows Phone and Microsoft Surface platforms.

Good Technology further notes that "Analyzing the long trail of the net new device activations by platform provides unique insight into not only the popularity of the individual devices and form factors, but also the platforms that enterprises prefer for enabling employees to access business data and applications."