According to a new report published today, General Electric announced collaborations with Apple and Qualcomm today as it uses digital technology and the growing appetite for data to reinvigorate its 130-year-old lighting business. GE said it will produce an LED bulb compatible with Apple's yet-to-launch connected-device platform HomeKit. The bulb can change colors to align with the natural rhythms of the body.

Comstock noted that "As we continue to grow our infrastructure business by connecting our brilliant industrial machines to the Internet, it is important that consumers experience connected things in easy-to-use, everyday ways. Lighting is how many first experiment with the idea of a smart home, and our insights show that consumers want the ability to control lighting from anywhere, automate lighting and pair lighting with other devices—like sensors, thermostats and door locks.

We’re excited to announce our support for HomeKit as it will bring a seamless, intuitive user experience using Siri and superior quality of light from America’s most trusted lighting brand for more than a century."

Embedded with GE Align™ technology, GE’s HomeKit-enabled LED bulb takes smart home technology a step further, giving consumers the ability to automate lighting according to the body’s natural sleep circadian rhythm. Lighting impacts our sleep patterns, and GE Align tunes the light spectrum to help promote the body’s natural sleep cycle by controlling the blue concentration of light output. In the morning, GE Align produces a bright, bluer tone that suppresses the body’s production of melatonin, and in the evening it produces an amber light, reminiscent of candlelight and campfires.

The new lightbulb from GE working with HomeKit is interesting in light of the fact that this is an area that Samsung is trying to patent and rush to market as well. GE working with Apple on this project probably means that Apple will be able to deliver this solution for the home before Samsung. 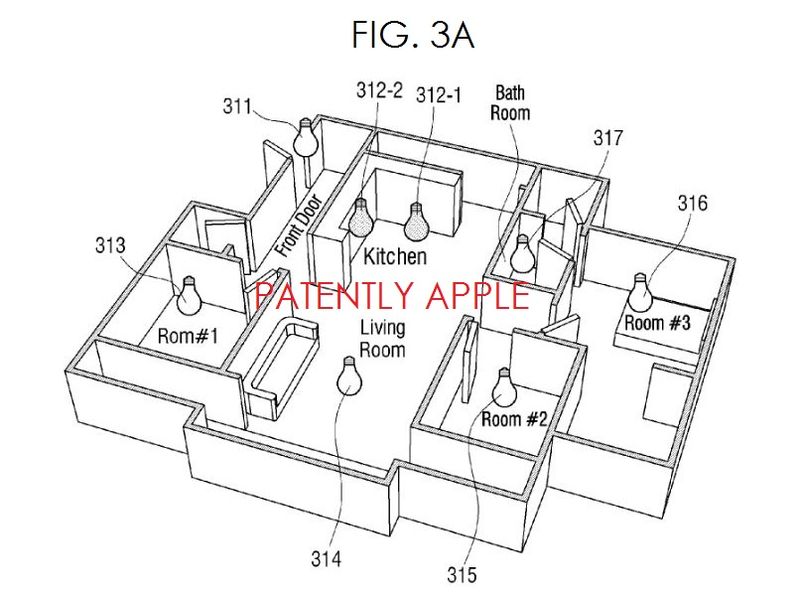 Samsung's patent concerning a "Smart Home Network Apparatus and Control Method" was published by the U.S. Patent and Trademark Office last week. Samsung calls their LED lighting "illumination devices" that consumers will be able to use throughout their home as noted above Samsung's patent figure 3A above.

In one example, Samsung patent filing states that "when an event in which water boils over in a gas range occurs, the event is sensed, and information for the event is received from the first communication unit , the controller may generate a control signal for controlling the gas range to turn the range off through a UI screen provided by the user terminal apparatus" shown to be a tablet and smartphone.

Without a doubt the race is on to bring this next generation solution to the home and it looks like Apple may have the edge with the help of GE.