Our first patent report this morning was titled "Apple Advances their OS X "Quick Look" Feature for iOS iDevices using an Intense Touch Gesture." In this second report, we see Apple extending their thinking from the first patent that we covered. In this patent filing Apple delivers a mind boggling overview of where fingerprint technology may go as Touch ID was just the tip of the iceberg. It begins with future iDevice displays taking on fingerprinting capabilities and sensitivities beyond the just the Home Button. Apple discusses the possible use of virtual knobs, controlling video games via the Home Button, assigning different bank accounts to different fingerprints and much, much more. This has to be the most in-depth patent filing of the year and should be considering that Apple is actually combining a series of patents under this one filing. Some territory is familiar while other aspects are new. While we painstakingly created over ten patent figures for this report, the fact is that the patent filing actually has more than a hundred in total. Considering that the this patent application shares the same background as the first patent report linked to above, we'll just jump right into the meat of this patent because even Apple's introductory summary carries 67 paragraphs. It's a long one, so enjoy. 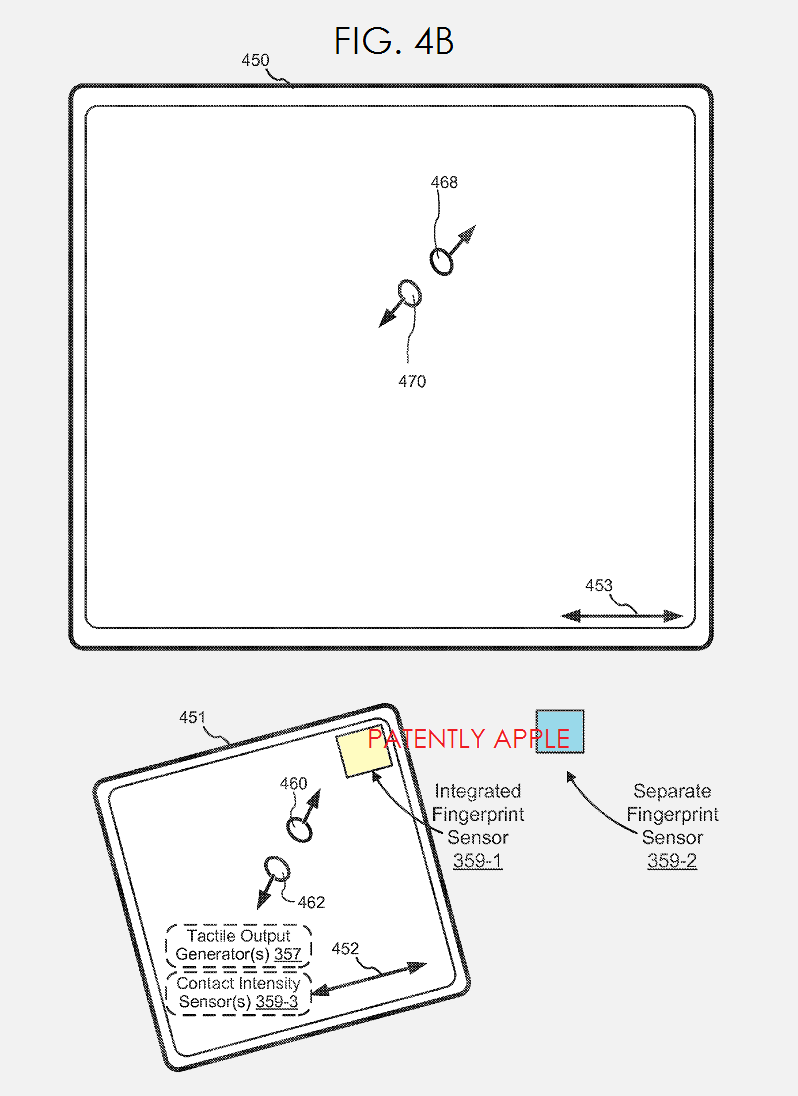 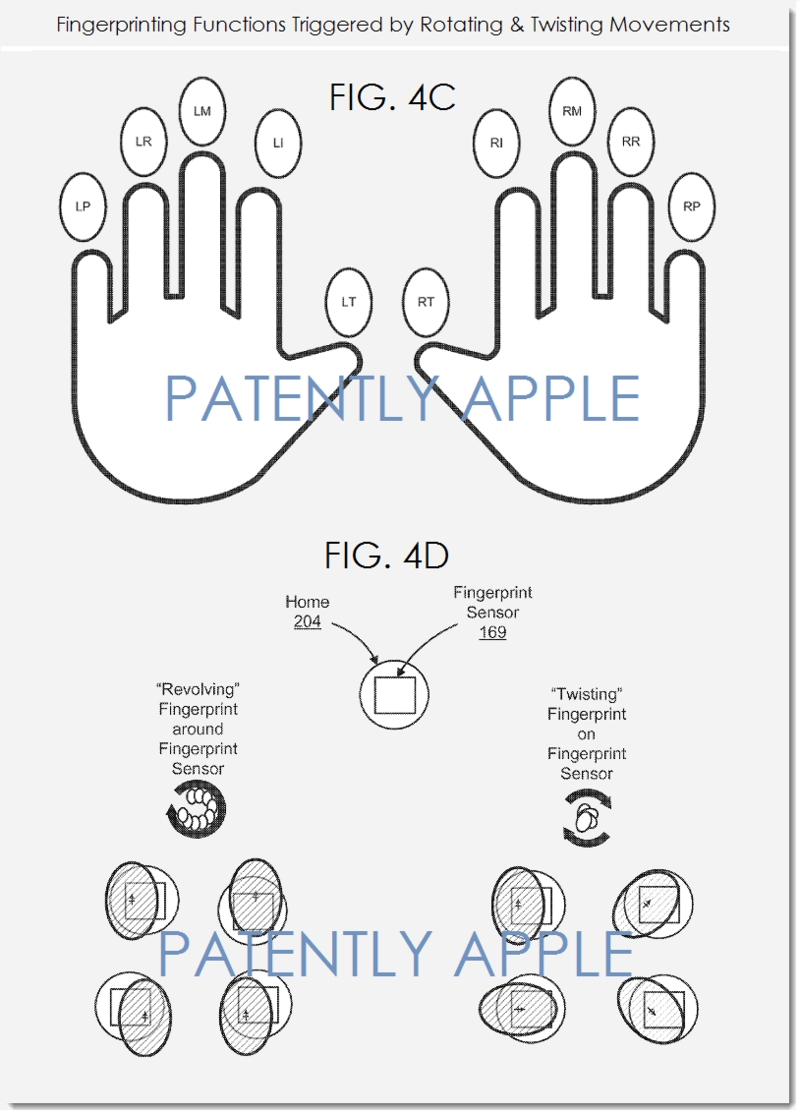 In some embodiments, Apple states that the one or more fingerprint-sensor activation criteria include a criterion that is met when a fingerprint-shaped contact is detected to be moving or rotating (e.g., twisting) at a speed below a predetermined threshold speed (or at a rotation speed below a predetermined threshold). Another example of a fingerprint-sensitive user interface element is an interactive user interface object (e.g., a virtual dial or knob as noted in more detail further below).

Secondary Home Button use for Playing a Video Game

Apple provides us with an example of playing and controlling a video game using the new fingerprint gestures and movements outlined in this patent application. In patent figures 8A, 8H and 8J below you're able to see the user control the gaming character aiming and firing his arrows at a target.

Apple notes that in some other embodiments, the Home Button could be a virtual button and a specific gesture detected by fingerprint sensor causes activation of the button.

Whether Apple will choose to start with the design above and then evolve the Home Button to becoming a pop-up gaming joystick as Apple revealed in a patent in January is unknown at this time. 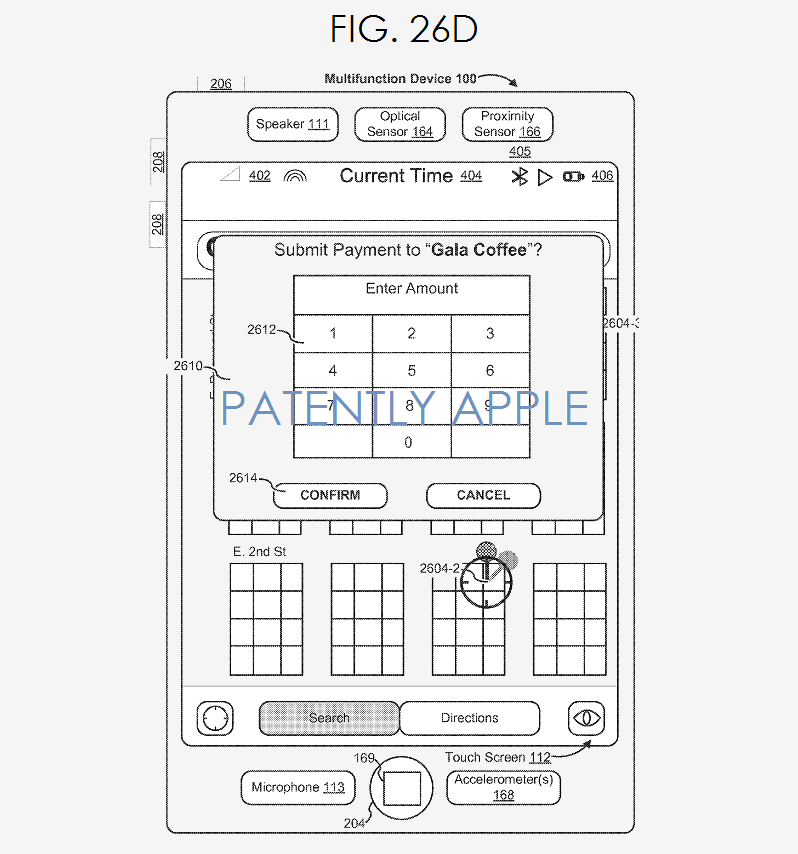 Controlling Noise Reduction in Recorded Audio with a Fingerprint Sensor

Apple states that many electronic devices enable users to record media, including recording audio. While recording, a user typically wishes to reduce/cancel noise coming from sources other than the intended source in the recorded audio. For example, a user may wish to reduce the sound of his breathing in the recorded audio. However, a user may wish to stop or toggle the noise reduction at will. For example, the user may wish to provide commentary during certain parts of recorded media while cancelling inadvertent user sounds during other parts. Existing devices either do not provide the user this functionality or require the user to navigate through various menus and user interfaces. In the embodiments described below, an improved method for controlling noise reduction in recorded audio is achieved by using a fingerprint sensor to allow the user to toggle noise reduction on and off. This method streamlines the process of controlling noise reduction in recorded audio by doing so in response to a fingerprint sensor on an electronic device. 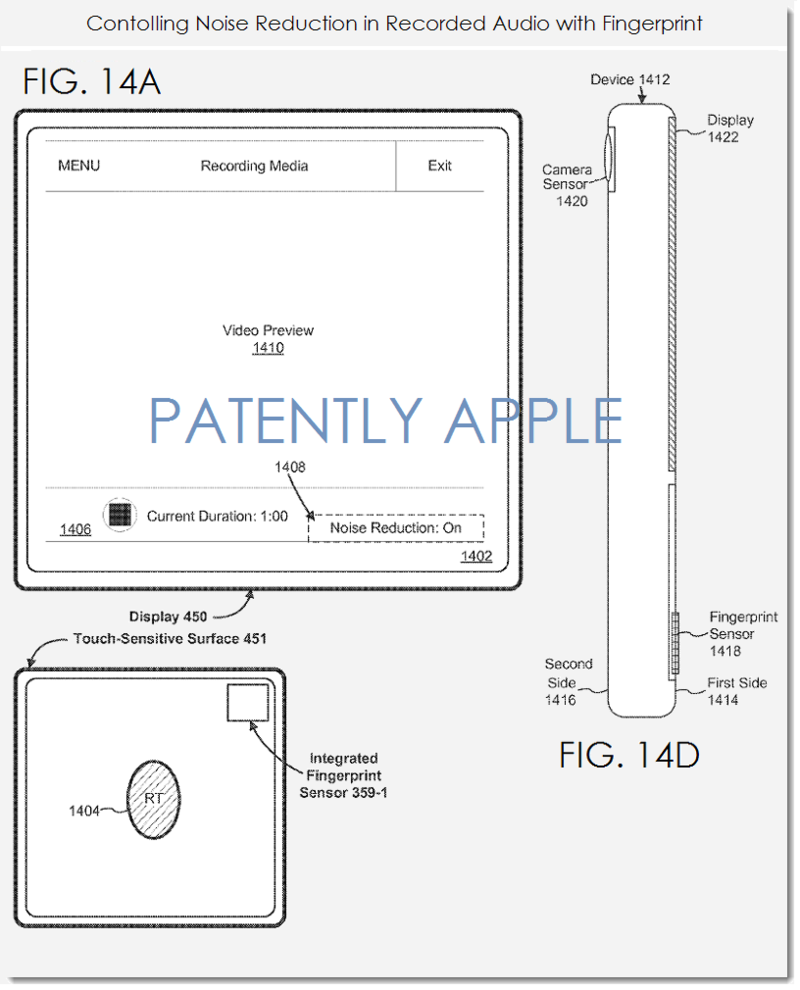 Apple's patent FIG. 14D noted above illustrates an example of a device with a display, a fingerprint sensor, and a camera sensor for use in controlling noise reduction in recorded audio.

An iDevice Home Button Used as a Scroll Wheel 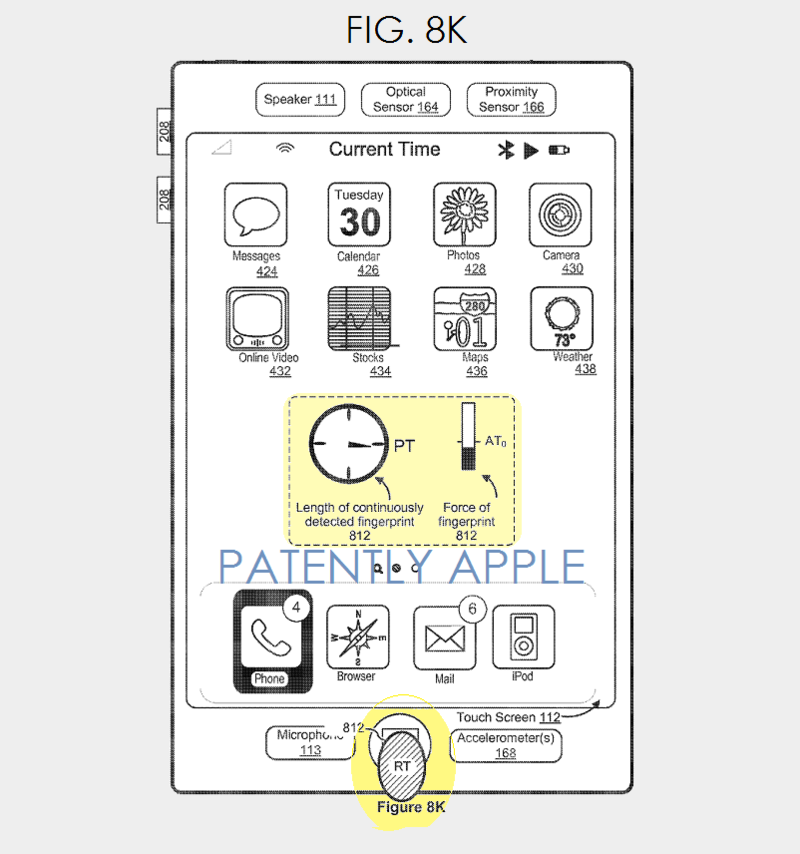 Apple's patent FIG. 8K noted above illustrates an example in which the focus selector's position is controlled by circumferential movement around fingerprint sensor (e.g., the fingerprint sensor acts as a "scroll-wheel" with exemplary properties illustrated below). This feature may one day work with Safari and many other applications. 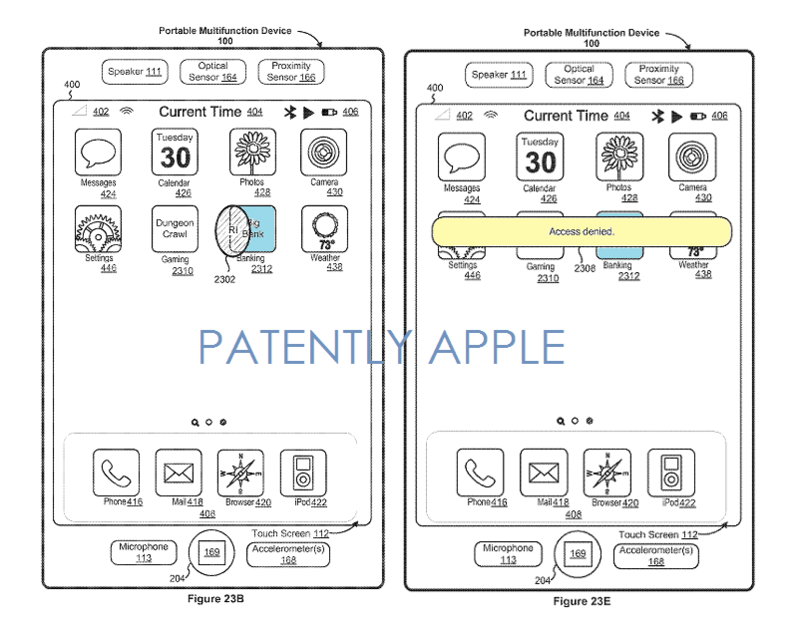 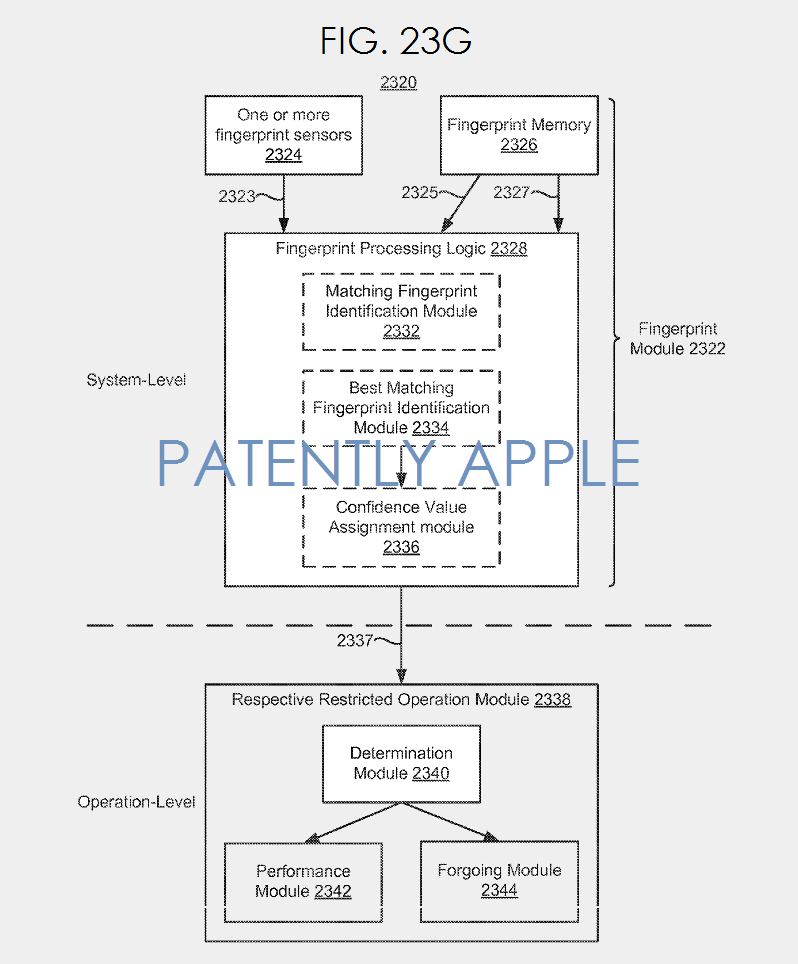 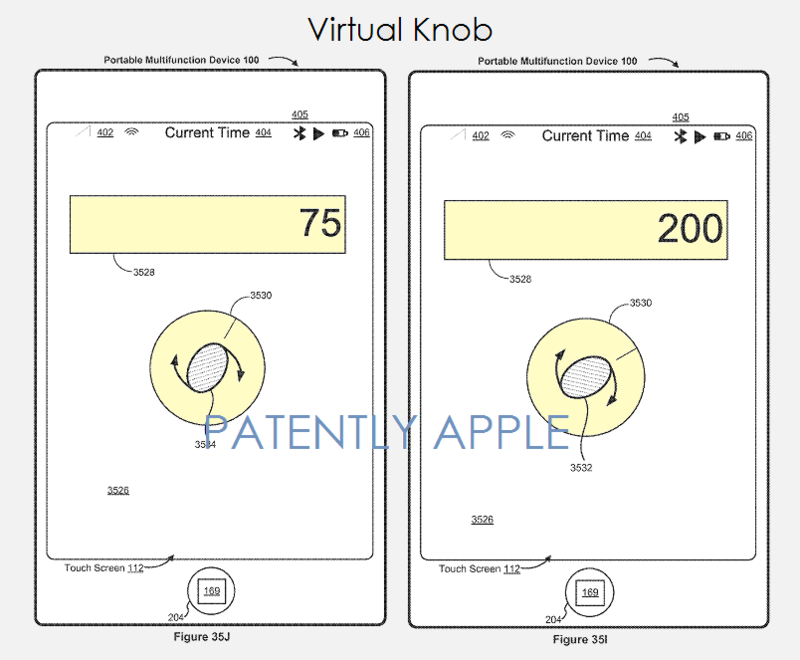 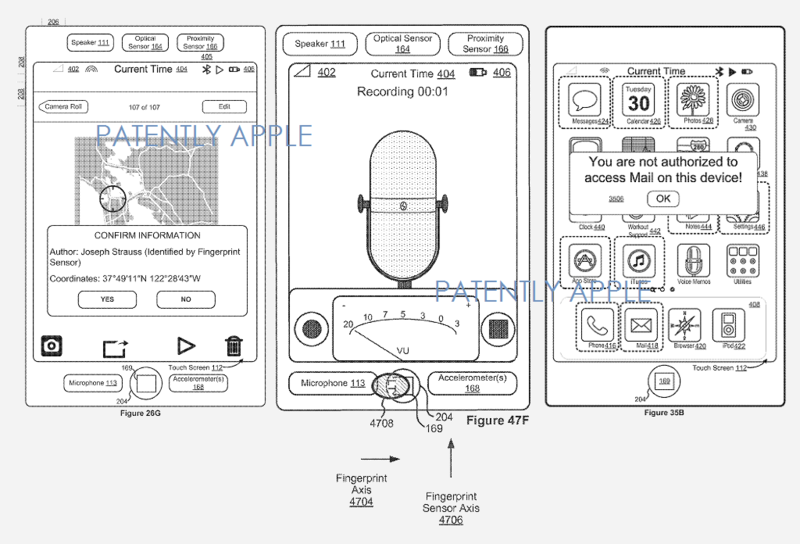 Apple's patent provides us with a hundred (if not a few hundred) illustrations to review – and way too many for us to cover in this report. The depth of this patent application is mind boggling covering so many fingerprint triggered features like multitasking and a long list of future apps that will be able to take advantage of Apple's new fingerprint related functions. It's definitely one worth reading over the weekend if this subject matter interests you. To review Apple's full patent application, click here.