The U.S. Patent and Trademark Office officially published a series of 37 newly granted patents for Apple Inc. today. In this particular report we cover a granted patent covering a pattern projector. Apple's newly granted patent was originally acquired by PrimeSense. This is the second such granted patent relating to a projection system. We covered the first one back in December 2014 in a detailed report titled "Apple Wins a 3D Mapping Laser Beam Projector System Patent."

Apple's newly granted patent covers their invention relating to optical systems, and specifically to pattern projectors. The projectors may be produced as a very compact unit, for example being included in a mobile station (e.g., PDA, cellular phone) and/or a portable computer.

Apple's patent FIG. 1 noted below is a schematic, pictorial illustration of a 3D optical mapping system. The system comprises a pattern projector #18 which generates and projects a pattern light beam through an aperture #29 at an object #26 (in this case a hand of a user of the system) and a light detection unit #28, which collects light reflected from the object. 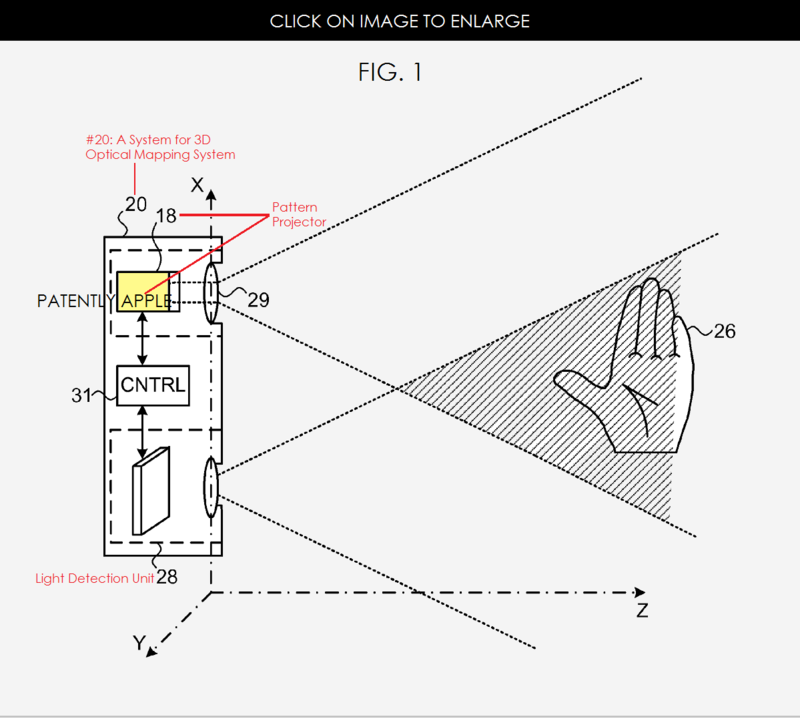 The 3D map that is generated by the system's processor may be used for a wide range of different purposes. For example, the map may be sent to an output device, such as a display (not shown), which shows a pseudo-3D image of the object. In the example shown in FIG. 1, object #26 comprises all or a part (such as a hand) of the body of a subject. In this case, "system #20 may be used to provide a gesture-based user interface, in which user movements detected by means of system 20 control an interactive computer application, such as a game, in place of tactile interface elements such as a mouse, joystick or other accessory."

Considering that PrimeSense technology was vital to Microsoft's Kinect system, this isn't fantasy technology – it's technology that works.

Alternatively, Apple notes that the system may also be used to create 3D maps of objects of other types, for substantially any application in which 3D coordinate profiles are needed.

Apple credits Micha Galor, Jonathan Pokrass and Amir Hoffnung as the inventors of granted patent 9,035,876 which was originally filed in Q4 2013 and published today by the US Patent and Trademark Office. To review today's 35 granted patent claims and extensive detailing, see Apple's patent.