The U.S. Patent and Trademark Office officially published a series of 37 newly granted patents for Apple Inc. today. In this particular report we briefly cover patents related to the Mac Pro tower, liquid metal used to create a major component of the iPhone and more. In closing, we wrap up this week's granted patent report with our traditional listing of the remaining granted patents that were issued to Apple today. 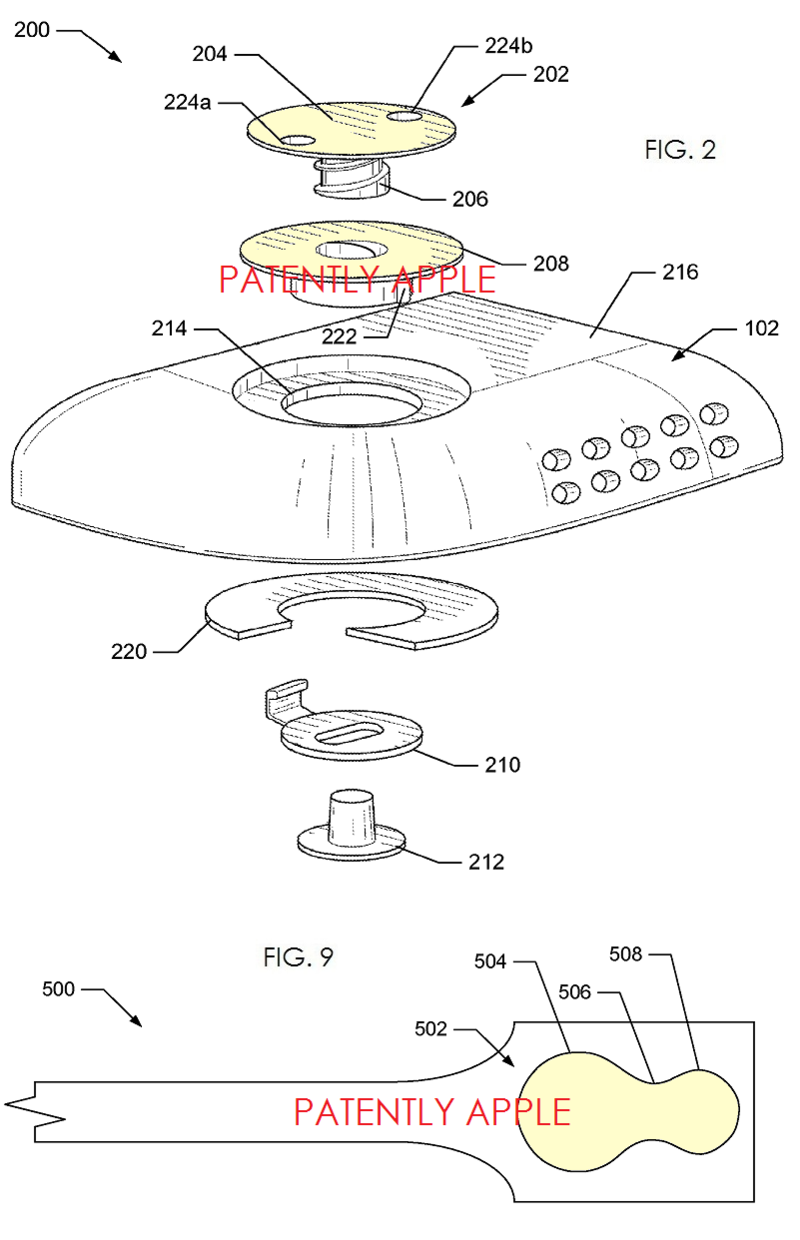 Apple credits Trent Weber as the sole inventor of granted patent 9,033,199 which was originally filed in Q3 2012 and published today by the US Patent and Trademark Office.

Apple's newly granted patent covers their invention relating to methods of making use of open cell foams as a processing aid or to improve the properties of bulk-solidifying amorphous alloy materials. The patent confirms that the iPhone 4's metal band was made from a liquid metal process.

Apple's Device 10 noted in patent FIG. 5 below is an example of an iPhone that supports 2G, 3G, and/or 4G cellular telephone and data functions, global positioning system capabilities and beyond. Antennas for handling wireless communications may be housed within housing 12.

More specifically, the patent points out that the iPhone's housing, which is sometimes referred to as a case or band, can be fabricated from a composite bulk-solidifying amorphous alloy/foam material. In a preferred embodiment, one or more portions of the housing may be processed to form a part of the antennas in the device. For example, metal portions of the housing may be shorted to an internal ground plane in the device to create a larger ground plane element for that device. 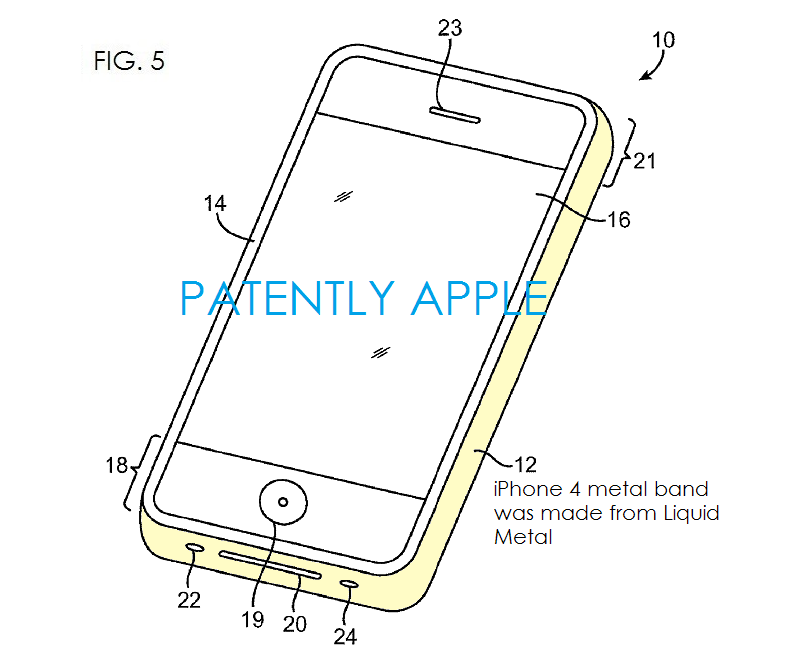 Apple credits Christopher Prest, Matthew Scott, Stephen Zadesky, Dermot Stratton and Joseph Poole as the inventors of granted patent 9,033,024 which was published today by the US Patent and Trademark Office.

Other liquid metal reports in our archives include these: one, two, three, four and their most recent granted patent covering liquid metal for the manufacturing of screws.

Apple was granted five design patents today. The main designs that are noteworthy include an Apple Store within a Store display table (D729,560) and the Mac Pro's tower top (D729,809) as noted below. The other designs covered a MacBook battery and two user interface elements relating to GarageBand and iMovie. 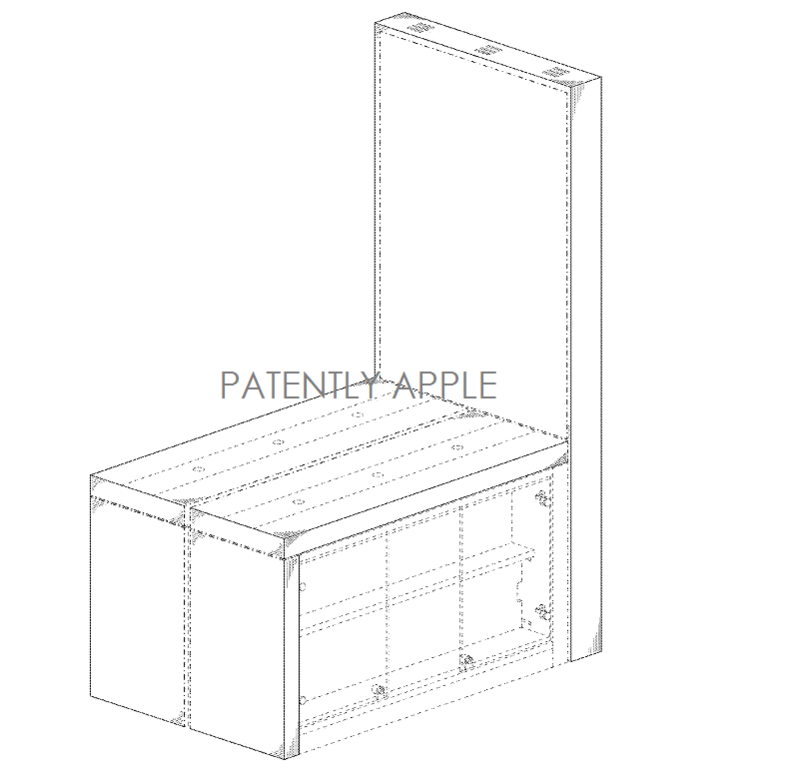 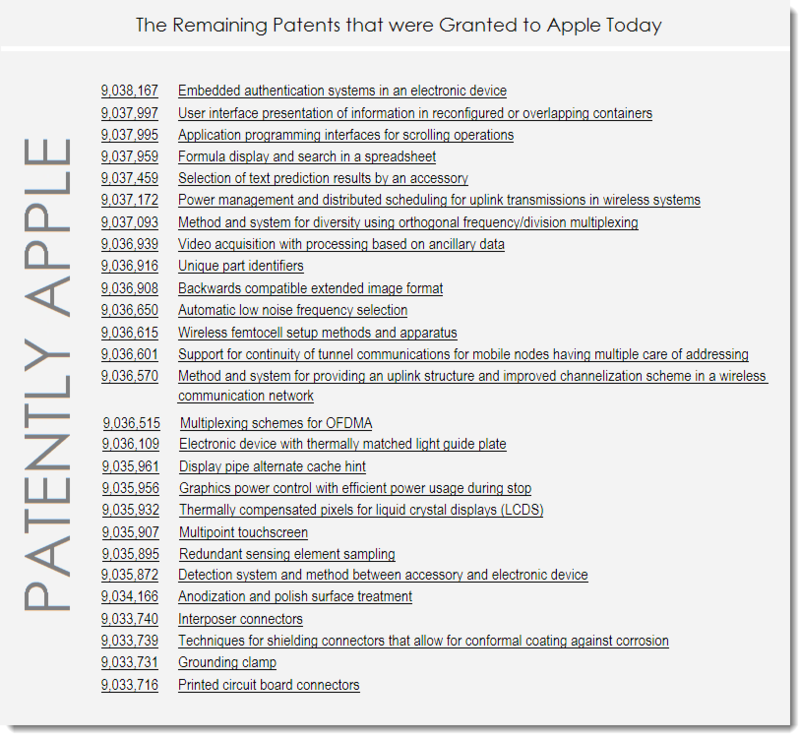