In April we reported that Apple was already testing Force Touch Display Panels for their next iPhone and on Monday we were first to report that Apple's 2016 iPad Display may use Next-Gen Touch Panel Technology using Nano Silver Wire Materials that would bring more sensitivity to iPad displays. In practice, Apple notes that with their new MacBook's "Force Touch" trackpad you can now use a Force click to enable new capabilities, like quickly looking up the definition of a word or previewing a file just by clicking and continuing to press on the trackpad. Today, we learn in a newly published patent application that Apple intends to bring their OS X "Quick Look" feature to iOS using a new "Intense" touch gesture based on integrating new intensity sensors into the display.

Exemplary user interface objects include digital images, video, text, icons, control elements such as buttons and other graphics. A user will, in some circumstances, need to perform such manipulations on user interface objects in a file management program such as the Apple Finder; an image management application like iPhoto or other apps like iTunes, Keynote, Pages and others.

But existing methods for performing these manipulations are cumbersome and inefficient. In addition, existing methods take longer than necessary, thereby wasting energy. This latter consideration is particularly important in battery-operated devices. It's acknowledged that there is a need for electronic devices with faster, more efficient methods and interfaces for manipulating user interfaces.

Apple's invention relates to a display method that could detect intensity of contacts with the touch-sensitive surface.

A number of different approaches to providing an intuitive user interface on a device where a clicking action is decoupled from the force that is needed to reach an activation threshold and/or the device is sensitive to a wide range of contact intensities are described in Apple's filing.

Using one or more of these approaches (optionally in conjunction with each other) helps to provide a user interface that intuitively provides users with additional information and functionality, thereby reducing the user's cognitive burden and improving the human-machine interface.

Many electronic devices allow users to interact with items such as documents. A document may reside in a folder or be attached to another document, such as an email. In some methods, if the user wants to look at the contents of the document, the user would have to open the document in the associated application. This can be tedious and wasteful of system resources, as the user may merely wish to view the document contents quickly. The embodiment noted below in patent FIG. 5N improves on these methods of interacting with documents by allowing the user to preview a document or open the document based on the intensity of a contact corresponding to a focus selector interacting with a document icon. 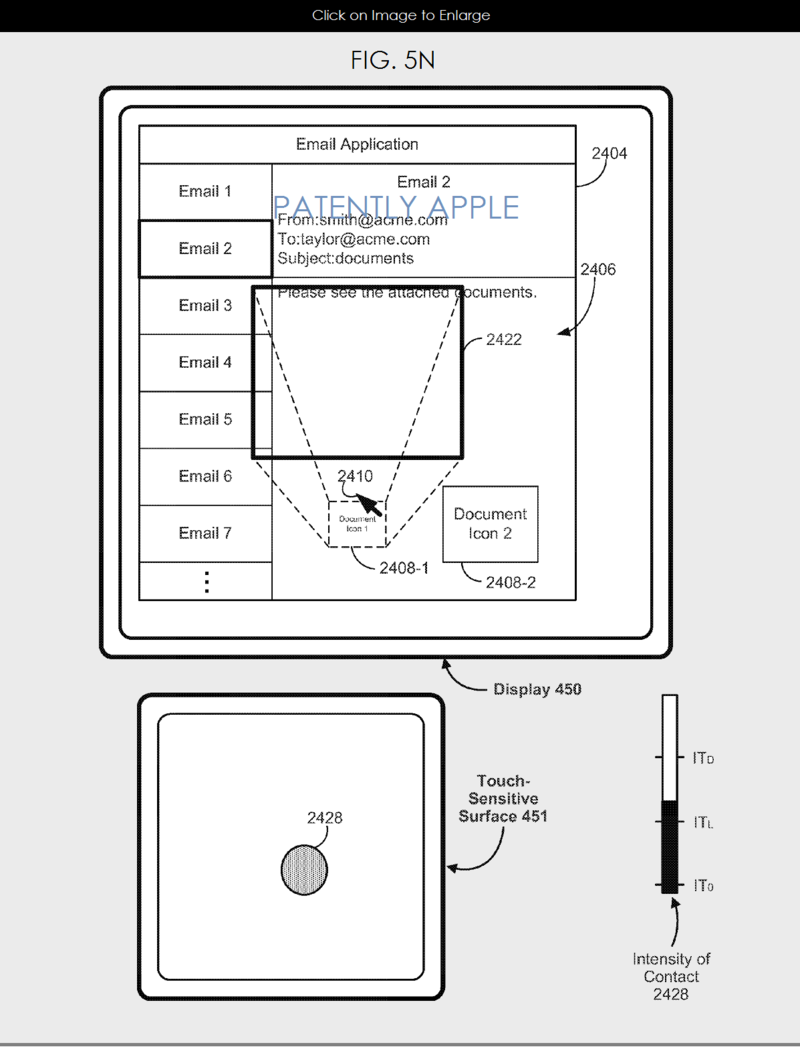 Apple credits Nicholas Zambetti and Jeffrey Bernstein as the inventors of patent application 20150135109 which was originally filed in Q4 2014. Considering that this is a patent application, the timing of such a product to market is unknown at this time.