A new book titled "Strategy Rules" by Harvard and MIT professors, analyzes the strategies, principles, and skills of three of the most successful and influential figures in business—Bill Gates, Andy Grove, and Steve Jobs—offering lessons for all managers and entrepreneurs on leadership, strategy and execution. The authors' first bestselling book was titled "Competing on Internet Time" was a Business Week top 10 book.

The book notes that "In less than a decade, Bill Gates, Steve Jobs, and Andy Grove founded three companies that would define the world of technology and transform our lives. At their peaks, Microsoft, Apple, and Intel were collectively worth some $1.5 trillion. Strategy Rules examines these three individuals collectively for the first time—their successes and failures, commonalities and differences—revealing the business strategies and practices they pioneered while building their firms."

David B. Yoffie and Michael A. Cusumano have studied these three leaders and their companies for more than thirty years, while teaching business strategy, innovation and entrepreneurship at Harvard and MIT. In this enlightening guide, they show how Gates, Grove, and Jobs approached strategy and execution in remarkably similar ways—yet markedly differently from their erstwhile competitors—keeping their focus on five strategic rules. As for insider access, it certainly helps that Mr. Yoffie is a long-time board member of Intel.

Strategy Rules brings together the best practices in strategic management and high-tech entrepreneurship from three path-breaking entrepreneurs who emerged as CEOs of huge global companies. Their approaches to formulating strategy and building organizations offer unique insights for start-up executives as well as the heads of modern multinationals. 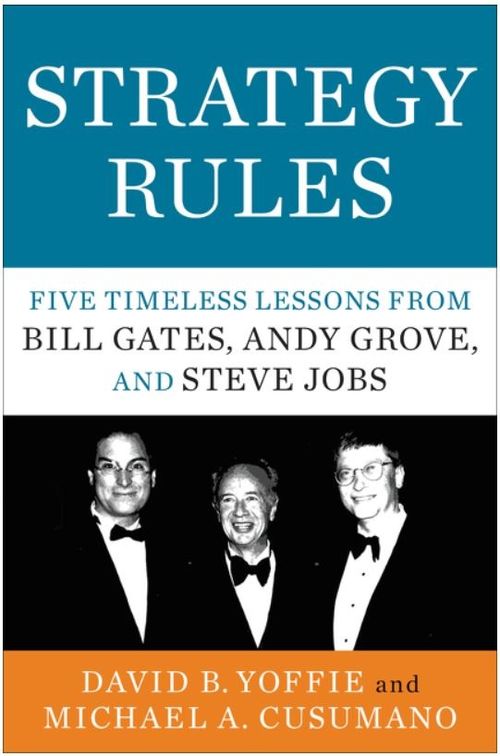 In digital-age competition, the long goal is to establish an industry-spanning platform rather than merely products. It is platforms that yield the lucrative flywheel of network effects, complementary products and services and increasing returns. The payoff is market power and huge profits.

The New York Times report on this book notes that "The Windows operating system was one such platform almost from the outset, and the Intel industry-standard microprocessor would become one.

Under Mr. Jobs, the authors note, Apple was long a product-first company. He preferred beautifully designed products that worked in splendid isolation. But even he eventually grasped the value of platforms. In October 2003, Apple released iTunes for Windows, so Apple's hit iPod music player could enter the larger market of PC users. "Apple's fortunes changed forever," Mr. Yoffie and Mr. Cusumano write. In June 2007, after initially resisting, Mr. Jobs announced that outside developers would be allowed to create software applications for the iPhone. Soon, its App Store took off.

Mr. Yoffie said that "Bill Gates got it immediately. It took Andy Grove 10 years to figure it out, and 20 years for Steve Jobs. Jobs was always a product first, platform second kind of guy, but he figured it out eventually."

The authors' emphasis on the pivotal role of platform strategy raises questions about the long-term prospects for Apple, the reluctant platform adopter. In the book and in interviews, the authors say this could be the company's Achilles heel someday.

Though the authors think that platforms are the key to winning markets, Mr. Cusumano did admit that "Platform theory has always looked at market share, but Apple has taught us to look at profits too. It's certainly made me think twice about market share."

Yes, and it should wake up Wall Street to the fact that profits are more important than market share if the profits for a given market don't pan out. We still, to this day, read about Samsung having more "market share" or more "shipment volume" than Apple in headlines like this one: "Samsung regains smartphone sales crown from Apple."

The volume argument is useless when Samsung is selling cheap and profitless phones in markets around the world and yet had their profits plunging for the last three or four quarters while Apple was announcing massive record-breaking profits.

Though in the end, despite acknowledging that profits over platforms was a lesson learned, the authors went back to stating that "The market share of the companies in the Android camp for smartphones and tablets — using software Google distributes for free — is 80 percent, more than five times that of Apple's iOS software. And if the Apple Watch, they say, is to become a "personal digital platform," the company must open it up to work with all smartphones, not only iPhones — just as Apple eventually opened up the iPod to work with PCs as well as Macs.

Of course back when Apple opened up the iPod to PC's, Apple was in a "fight for your life" position in the market trying to remain relevant. It was a wise business move back then, even though it was a bit desperate. It was a classic Hail Mary play that worked.

With Apple now leading the digital revolution with their popular iDevices in a closed platform, I'm not quite sure that the argument that Apple has open up the Apple Watch as a "personal digital platform" to be successful really rings true.

If you haven't already noticed, Apple is focused on making the very best products at a healthy profit. The market share argument that the authors are stuck on doesn't really faze Apple's management. In fact, Apple's CEO Tim Cook recently stated in a Fast Company interview that the obsession with market share was almost a disease:

"There's this thing in technology, almost a disease, where the definition of success is making the most. How many clicks did you get, how many active users do you have, how many units did you sell? Everybody in technology seems to want big numbers. Steve never got carried away with that. He focused on making the best."

I think that's what Cook would say to these two authors of "Strategy Rules": You teach platform theory, but it's not the only way to look at a market – and we're proof of that.

Yet with that said, could Apple surprise us by opening the Apple Watch to tie it into their iTunes software on Windows or an equivalent on the Android platform in the future? I highly doubt it, but it's definitely food for thought.