Samsung has been working on several flexible display devices for some time now. They have several very futuristic patents on record like this one that covers a wide curved display for a future smartwatch. Samsung's newest Galaxy S6 "Edge" smartphones offer double sided curved edged displays which is just the tip of the iceberg as to where they want to go with this technology. This week we covered a Samsung design patent on this curved wide display based smartwatch. Even Apple has one on record that predates Samsung's patent for a future wide and curved display wrist device. Now out of nowhere, LG is on record with a new design patent for a wild Flexible Smartphone that could be used in connection with an attachable wristband accessory. 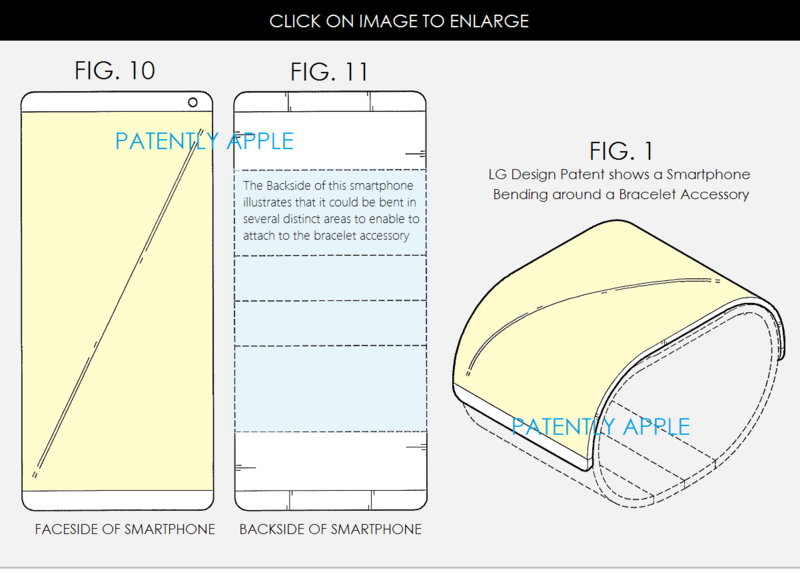 Unfortunately being a design patent, there's absolutely no explanation as to what approach that LG could possibly take to ensure that the straight smartphone would be able to bend and conform around a bracelet and back again into a smartphone.

It also doesn't explain what material is on the backside of the phone that would allow the user to quickly attach and detach the smartphone from the bracelet. Of course we could assume that it would be some kind of magnetics solution as it's been somewhat proven to work with devices like the iPad's Smart Cover. But we can't confirm that without a full patent application detailing LG's methodology.

Both Samsung and LG are pushing new designs to create new smartphone markets for their respective display plants. Both LG and Samsung are Apple suppliers which makes these designs more interesting. With Apple, Samsung and LG now on record with a wide band display type of device, be it smartphone, smartwatch or bracelet, it's clear that top tech companies all see this form factor as being viable in the future.

What would I prefer for a watch or wrist gadget? I'd probably prefer something along the lines of these new wider band gadget concepts than a traditional smartwatch. But that's going to be a few year down the road at minimum so the Apple Watch is likely to get the first nod.

Do you see smartwatches evolving to this kind of concept in general with much wider flexible displays over time? Send in your comments below. If you want to see other patent figures related this design patent, see our Patently Mobile report.