Intel's Kirk Skaugen, Senior Vice President and General Manager of the PC Client Group, Intel Corporation, presented a keynote on day two of Intel's IDF event in Shenzhen last week that centered on Intel's new processors including the new Atom x3, x5 and x7 along with Skylake. Intel's focus has shifted to supporting OEM's in China as a means of reinventing itself. China's giant appetite for technology and mobile devices is exploding and it's no wonder why they're the largest market in the world. It's here where Intel was helped to sell 43 million chips for tablets in 2014 and the numbers are likely to skyrocket over the next five years. Below we've put together a collage of some of Intel's presentation slides that are full of statistics that will open your eyes as to why China is the number one market in the world - Because it's all in the numbers. Today's report briefly covers a number of the top topics that rolled out during Skaugen's IDF keynote in China from devices that are more powerful than Apple's, to the coming Skylake processor, to the coming world of no-wire devices and few other things along the way that I think that you might find interesting.

During one point of Skaugen's keynote, he presented the new ASUS Chi notebook hybrid. It's quite an impressive device. Kirk proudly pointed out the specs of this new device. It weighs 720 grams or 1.58 pounds. In contrast, Apple's new MacBook weighs 2.03 pounds. Though to be honest, Skaugen may have gotten a little ahead himself on this spec as the new model, according to ASUS, weighs in at 1.43kg or 3.1 pounds. 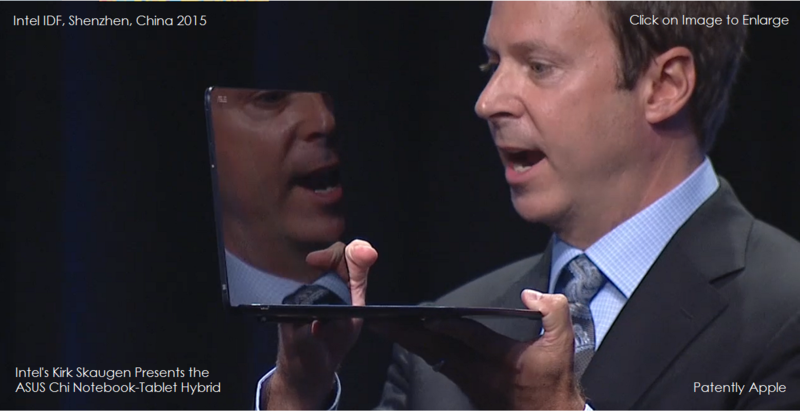 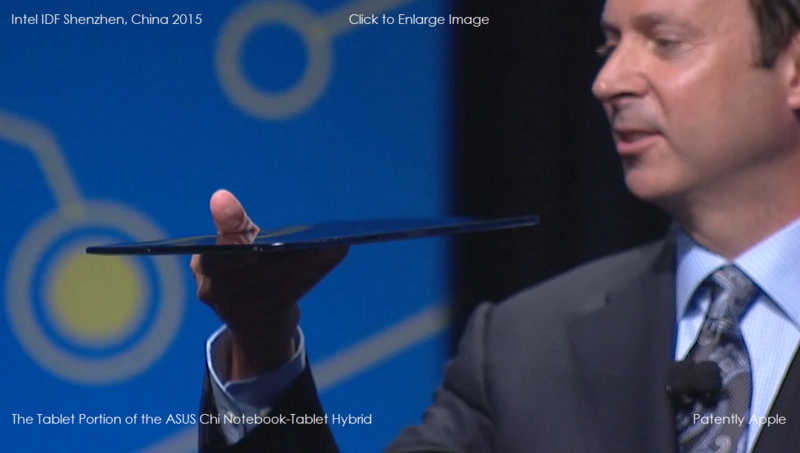 Interestingly or oddly, depending on how you see it, Skaugen actually stated "twice the performance of an iPad Air in tablet mode." Is he just not up on Apple's product line or was he accidently letting it slip that Apple has an iPad Pro in the wings that may offer us a 2-in-1 experience? For now we'll write that off as a keynote slip, but I wanted it on record.

To verify the full specs of the ASUS T300 Chi, click here. In general, the specs are actually quite nice with 4 GB RAM (up to 8GB), a 12.5" display (2560 x 1440) wide angle, 64GB ISSD, Core M processor and more. Although many think Intel's Core M is underpowered, it still has twice the power of an iPad Air. Even though it's a dig against Apple, the fact is that it does provide you with a sense that it's powerful enough to get most work done. I have an iPad Air and enjoy it, so a unit that would offer twice the power would suffice as an entry price of roughly $700 and it's a convenient 2-in-1 form factor which I'm a fan of.

Intel's Skaugen announced during his keynote that their Compute Stick is going into production in Shenzhen in the next week or two. 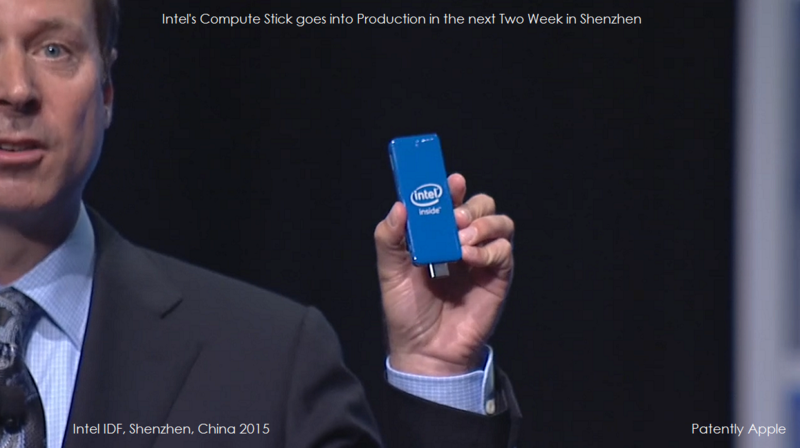 PC Gaming is huge around the world with 1 billion players with 245 million of them in China alone. Intel's new "Devil's Canyon" PC system offers up to 8 cores at 3.5 GHz with 16 threads, 40 lanes of PCIe – and what does that translate to – 12K gaming. 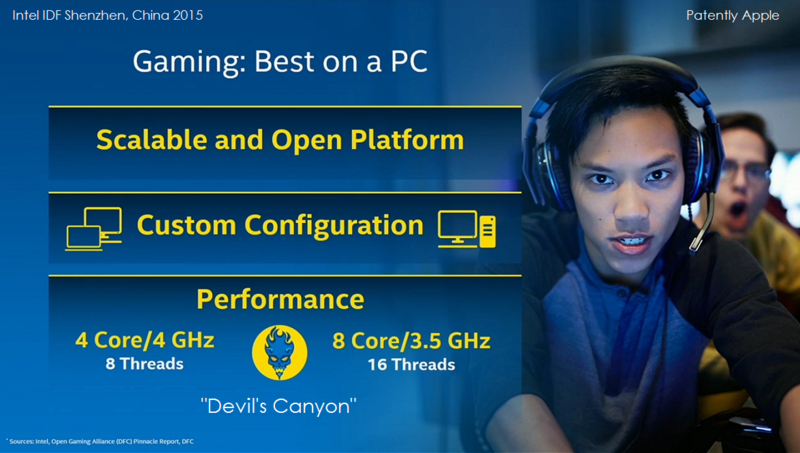 The Intel presentation was done with a single game spread out over three 4K displays. For PC mobile gaming, HP will be launching a new Envy notebook with a 15 inch 4K display using Intel's Iris Pro graphics solution shortly. With Xbox gaming coming to PC's with Windows 10 this fall, gaming could get very interesting once again. 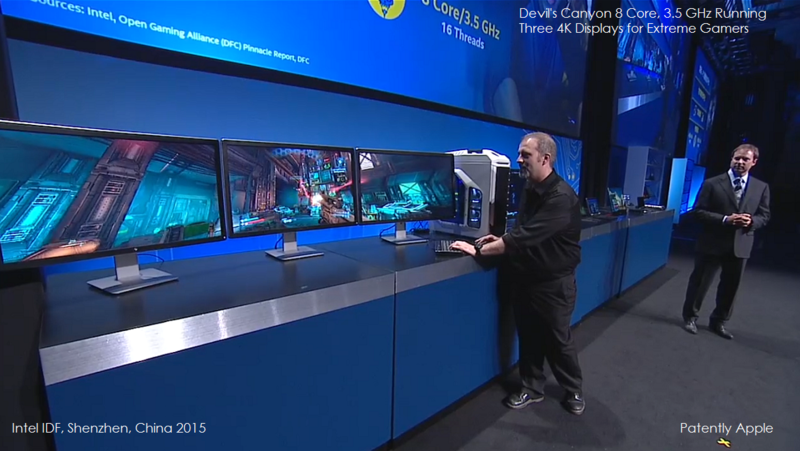 With Microsoft trying to offer more software for Apple devices lately, you have to wonder if Microsoft and Apple could work together to offer Apple fans Xbox on the Mac. While I highly doubt it, it would certainly be an incentive for some to buy new hardware which would benefit both sides.

The Star of the Show: Skylake

On next generation processors, Skaugen briefly touched on "Braswell" for value and entry systems which are a follow up to Bay Trail-M and D. It's on 14nm and will over twice the graphics power and over 10% more battery life.

The sixth generation Core processors dubbed "Skylake" is the star of Intel's line up for this fall or more correctly for the "second half of this year." Both desktops and notebooks will support 4K displays. So the MacBook and MacBook Air are likely to offer high end 4K displays in time for Christmas.

Another twist Intel revealed was that their 2-in-1 reference notebook design, as shown below, will include a notebook lid supporting Intel's 3D RealSense camera.

In this segment, Skaugen showed off an Intel reference design desktop using Skylake that provides a unique fold-out stand as noted and explained in the graphic below. Skaugen claimed that the desktop is only 10 millimeters thin. 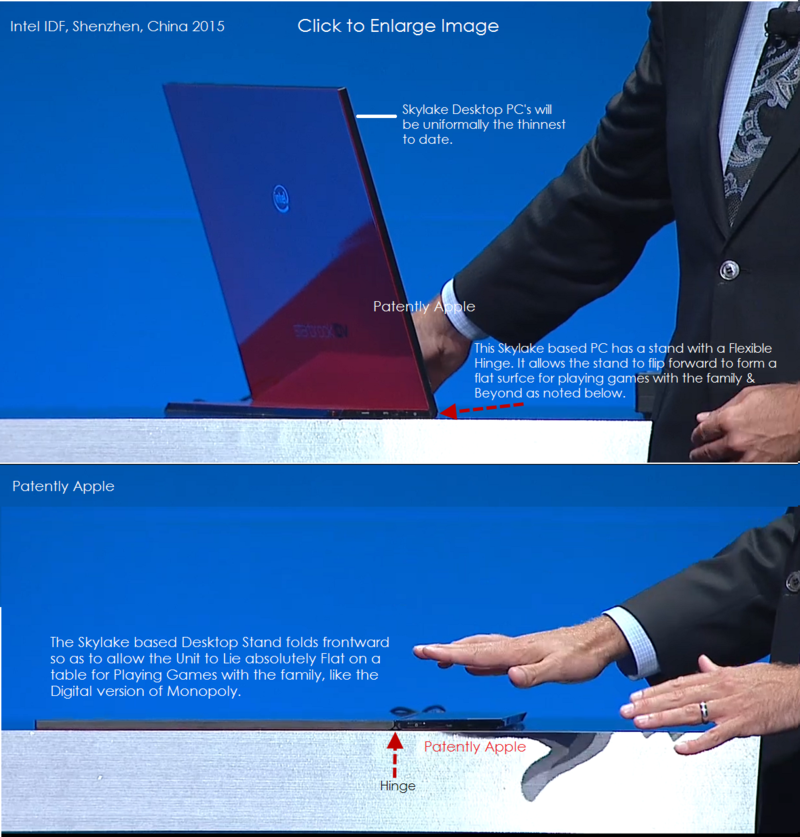 The Joke of the Day: You like Big Phones in China … 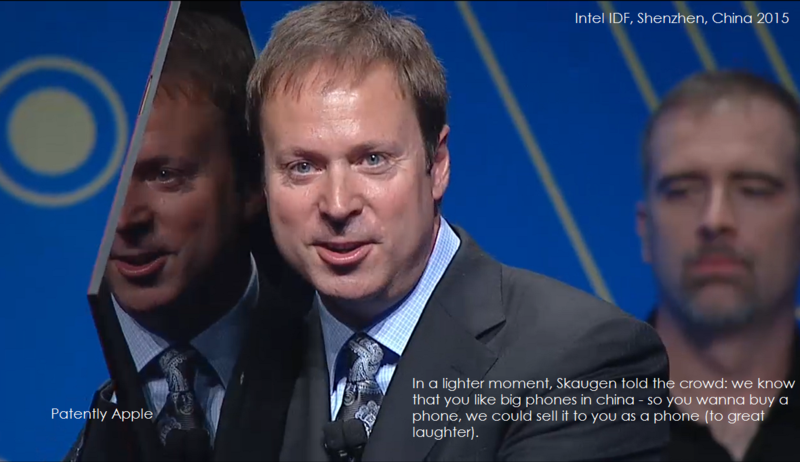 The next revelation from Intel was when Skaugen introduced the world's first no-wire PC. You'll never connect a wire to it for docking to the display and not for charging because it has integrated charging in the base – and this will come to market later this year.

In surveys Intel conducted with over 250,000 end users, they noted the three PC points of pain consumers wanted solved: eliminate all wires; eliminate all passwords; and bring new voice and gestures to PC's.

I think that Intel's third point isn't really about a point of pain. it's more about adding minor conveniences by integrating Microsoft's Cortana and Google now into the user experience. Being able to Ask your digital assistant to play a tune on demand or make a phone call for you while you're working could be a nice time saving feature.

From there Intel's Skaugen jumped right in with Intel's no wires solution that comes via incorporating technology from Rezence. We covered Rezence in much more detail back in a December 2013 report titled "The Cordless Home is now in Reach with Magnetic Resonance."

Hopefully Apple will support this technology because Intel is working hard with all major airports, train stations and coffee shops to support this new standard.

The new standard will allow users to simply place their new Intel ready hardware down on a table while having a coffee or eating at a restaurant and voila, the device(s) will begin charging immediately. That will be a great convenience - though the roll out of this technology is likely to take much longer than they think to implement.

In the demo as noted in the graphic above, Intel showed us a hot spot board. This new board will sit under a table or your work or home office desk and be able to charge multiple devices at one time.

At the end of the day Intel's IDF event in Shenzhen, China last week was a positive one that showed Intel with some new vim and vigor. By winning 49 million tablet orders last year with the help of new partnerships with Chinese OEMs, Intel is making strong head winds in China, the largest market in the world. The rapidity of their advances will soon have them going toe to toe with ARM if not surpassing them in the coming years. They're already showing charts like the one below to psych out their competitors. 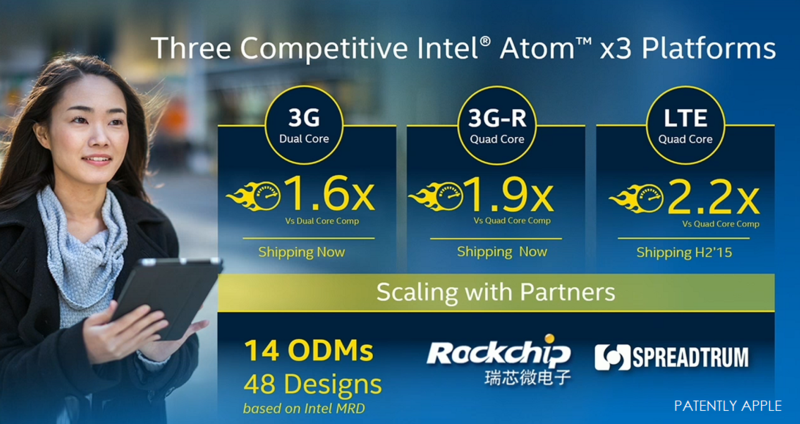 There are some positives on the way with Skylake for Macs this year, like 4K MacBook Pro and/or MacBook Air displays.

While the no wires PC movement will begin to scratch the surface later this year, it's likely to take until 2016 or 2017 before this movement even begins to make real waves. Where Apple fits into this trend is unknown at the moment, but it's safe to say that Apple won't miss out on this trend. I fully expect to hear where Apple stands on this trend either during this year's WWDC or at next year's event at the latest.

With Intel gaining momentum in the low to mid-markets in China and beyond, it's interesting that a rumor surfaced last month from VentureBeat that claimed that Intel would provide a fast wireless modem chip for a new Apple smartphone in 2016." VentureBeat noted that "The thing is, this won't be a standard iPhone."

The report further noted that Intel had been gunning hard during the past year for a place in the iPhone and now appears to have succeeded, at least partly. The 7360 chip will ship inside a special version of the iPhone that will be marketed to emerging markets in Asia and Latin America." Whether there's any truth to this rumor is unknown at present but Apple may want to test the waters with Intel as they begin to challenge ARM. Will it ever happen? Only time will tell.

At the end of the day I think that Intel is about to turn the corner and begin to make a dent in the mobile device universe. While it may not happen this year, Intel's road map seems to be accelerating and a deal with Apple could mark the beginning of a new positive era for Intel.

Other Intel Slides of Interest 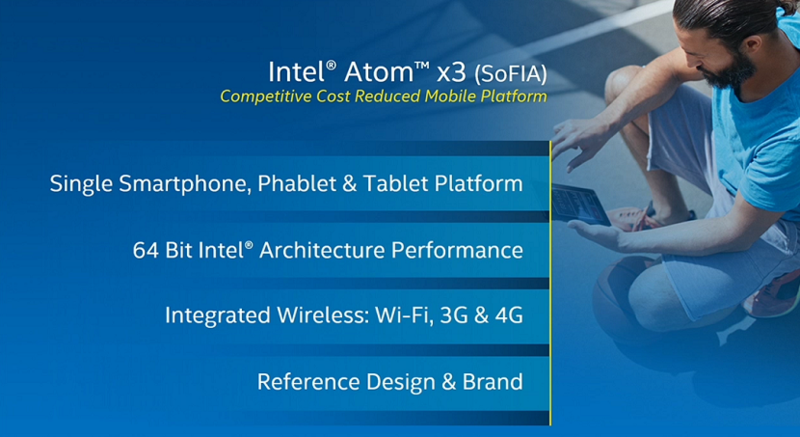 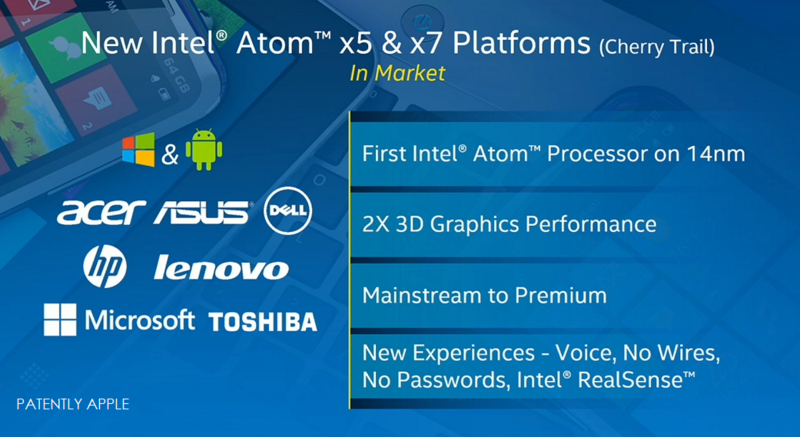