Apple worked hard on Force Sensor solutions that went into the new MacBook and Apple Watch. Today, the U.S. Patent & Trademark Office published another patent application from Apple regarding force sensors using strain and bending beam sensors. Apple states that by employing multiple sensors in appropriate configurations, a location at which a force is applied may be determined in addition to a magnitude of the force. As we know from the new MacBook, applying more force to the trackpad on certain applications like music, for example, could increase sound. Apple is working on new applications that could take advantage of their new combined force sensor and Taptic Engine systems.

The Force Touch trackpad: Press a little deeper, do a lot more

On Apple's new MacBook webpage on Design features, it states that "The new Force Touch trackpad may look like other trackpads on the surface – but underneath it's unlike anything that's existed before. Force sensors detect how much pressure you're applying, and the new Taptic Engine provides a click sensation when you press anywhere on the surface. Now the click that once was a single, mechanical function is just the start of what you can do with Force Touch. The sensory capabilities of the Force Touch trackpad allow you to tell your MacBook what you want it to do based on subtle differences in the amount of pressure you apply. This makes it possible to perform a variety of different actions in different apps, all on the same surface. And it can respond with haptic feedback you can actually feel, making your MacBook more usable and personal than ever before." 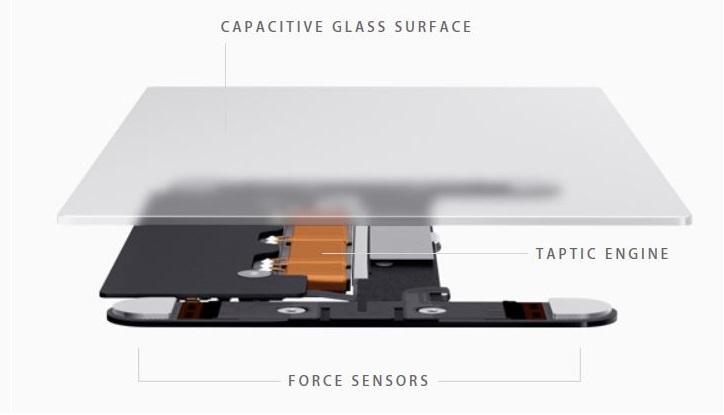 Today's invention generally relates to method and sensors for measuring forces on a trackpad or other surface, such as a computing input device. 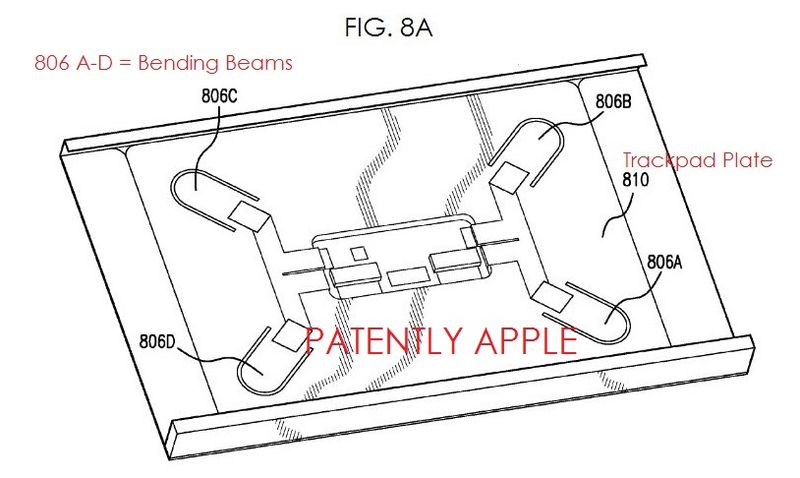 Apple notes that in the case of multi-touch gestures, the location and magnitude of multiple forces may be determined from the outputs of the position sensor and the bending beam sensors, each load correlated with a different touch on the trackpad or other input mechanism. For example, when using two or more fingers to touch a track pad simultaneously, it is required to determine the location and magnitude of multiple forces.

Whether this technology is already incorporated in Apple's new MacBook trackpad or has been replaced to a certain degree by Apple's Taptic Engine is unknown at this time. But it's clear that Apple's engineers have been researching and working on force sensor and applications for such sensors for some time now.

Some of Apple's other intellectual property on the topic of force sensors were covered in the following reports:

Apple credits Storrs Hoen, Peteris Augenbergs, John Brock, Jonah Harley and Sam Sarcia as the inventors of this patent application which was originally filed in Q4 2014.