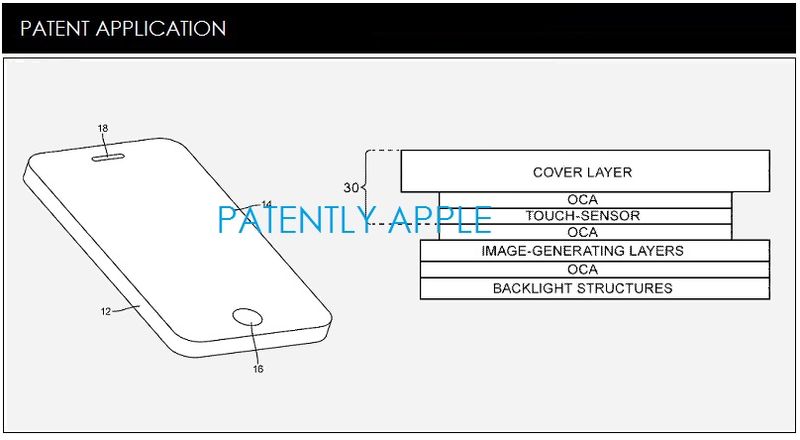 In September 2012 Apple introduced new In-Cell iPhone glass technology that Phil Schiller referred to as "Integrated touch." Months later, one of Apple's patents covering in-cell displays came to light. Late yesterday a patent application from Apple was filed in Europe revealing their specialized lamination process that they referred to as sensor-on-glass. It's now commonly known as "In-Cell." Apple had some production problems with devices using this process initially and had a temporary fall out with LG over the technology. While it may be commonplace today to use such touch displays,  Apple was one of the first to bring it to market.

Display layers are commonly laminated together using adhesive. If care is not taken, defects such as air bubbles can sometimes form in the display or sensitive display components can be damaged during lamination operations.     Defects or damage of this type can negatively affect the visual performance and robustness of the display. It would therefore be desirable to be able to provide improved lamination systems for electronic devices with displays.

For example, the hard-to-hard lamination equipment may be used to attach a sensor-on-cover-glass (CGS) assembly (sometimes referred to as a sensor-on-glass assembly) that includes a glass cover layer and a touch-sensitive layer to a display cell such as a liquid crystal display cell.

In order to minimize potential defects such as air bubbles between the substrates and to minimize the risk of damage to the substrates during lamination operations, one or both of the mounting stages may be provided with pressure sensors that monitor the pressure and uniformity of pressure with which the first and second structures are pressed together during lamination operations.

Actuating equipment that is coupled to the first and/or second stages may position the stages based on gathered pressure data from the pressure sensors.

Apple notes that touch sensors for the display may be formed from an array of capacitive touch sensor electrodes, a resistive touch array, touch sensor structures based on acoustic touch, optical touch, or force-based touch technologies, or other suitable touch sensor components formed on a touch-sensor substrate.

Apple's patent FIG. 7 noted below is a diagram of illustrative pressure-­sensing lamination stages showing how pressure sensors on a stage may be formed at a surface of the stage. 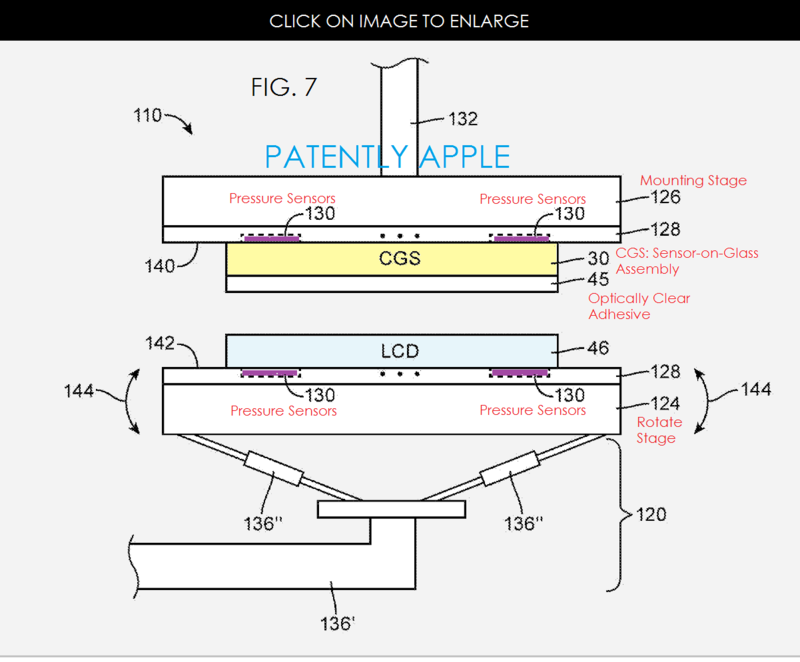 Apple originally filed their patent application back in 2013. The patent application that was filed in Europe under number WO2015041688 late yesterday listed engineers Kuo-Hua Sung and Yong-Soo Kim as the inventors. For those wishing to dig deeper into the details of this process, see Apple's European filing.