The Apple Watch has an Eye on the Enterprise Market

Apple made in crystal clear last year that they were serious about the enterprise market when they officially announced the new Apple-IBM Alliance. The alliance's MobileFirst website launched in November last year with the first set of new enterprise apps. In January, Apple's CEO announced that the alliance was on target to having 100 custom enterprise apps covering a series of targeted industries finished by year's end. Now that Apple Watch is nearing its launch date of April 24, businesses want to literally tap into this new tool, as most business executives wear watches.

It was reported late yesterday that several Apple Watch apps are purposely straddling the line between business and consumer markets. The list includes apps from Citi Mobile, Expedia, PayByPhone Parking and two from Salesforce.com. The Salesforce apps, which are free to paying customers of their corresponding Web programs, were designed as companions to the sales-software company's mobile apps.

Salesforce spokesman Michael Peachey stated that "The idea is to use the watch for '10-second interactions' and switch over to a smartphone or desktop for more extensive tasks."

Lindsey Irvine, Salesforce's global director of strategic partnerships and business development added that "Work scenarios are driving wearables into the employee universe." The challenge, she said, would be figuring out what functions to put on smartwatches and "right-sizing" apps to fit a tiny screen. 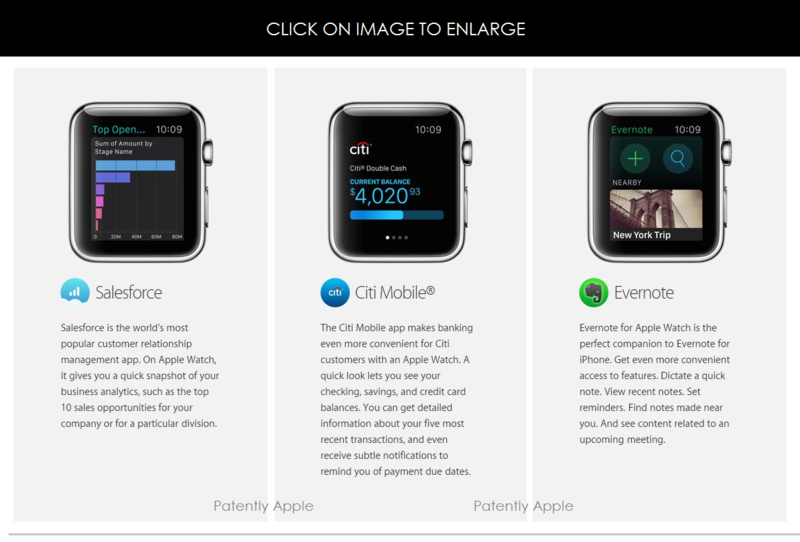 Salesforce1 for Apple Watch was designed to display notification of approvals, goals reached, overlong wait times for customer calls, and other events. Salesforce said it would become available in the third quarter.

For more on this report, read the full Wall Street Journal report here. You could find more Apple Watch apps for consumers and the enterprise here.

In the end Apple Watch is eying the enterprise market seriously right out of the gate. So it'll be interesting to see if the MobileFirst alliance is likewise working on future Apple Watch enterprise apps for later this year. Yes, leading by example would be a wise way to set the tone for business apps on Apple Watch.