With Samsung's profits falling off a cliff in the second half of 2014, Samsung needed their flagship Galaxy S6 smartphone to hit a home run today. Samsung's Special Event kicked off in Barcelona this morning and our report provides you with a brief overview of some of their keynote points.

Samsung has just unveiled their new Galaxy S6 and dual Edge model. There's nothing new that we didn't expect borrowing some of Apple's iPhone-6 flair. But they claimed that the metal is 50% stronger than competing smartphones and promised that it won't bend. Gee, I wonder which smartphone they were referring to.

The bottom and side frames of the new design mirrors the iPhone 6 as we reported on earlier. Samsung noted that in just 10 minutes it can charge the smartphone for 4 hours of play. They claimed it was 50% faster than the iPhone 6 (yawn). Also wireless charging is built in as we first reported on back in February.

Other aspects of the design include the use of Gorilla Glass 4 on the face and back and both smartphones come with 5.1-inch Super AMOLED displays with Quad HD (2560×1440) resolution that are extremely bright. The Galaxy S6 Edge’s display curves to both the left and right, and Samsung has built in some intuitive features, like a notification LED that glows on the side displays when a call comes in.

Lastly, under the hood, the S6 and S6 Edge are powered by Samsung's own Exynos 7420 processor, which has eight cores and full support for 64-bit processing. There’s 3GB of LPDDR4 RAM, and internal storage is fixed at 32, 64 or 128GB. 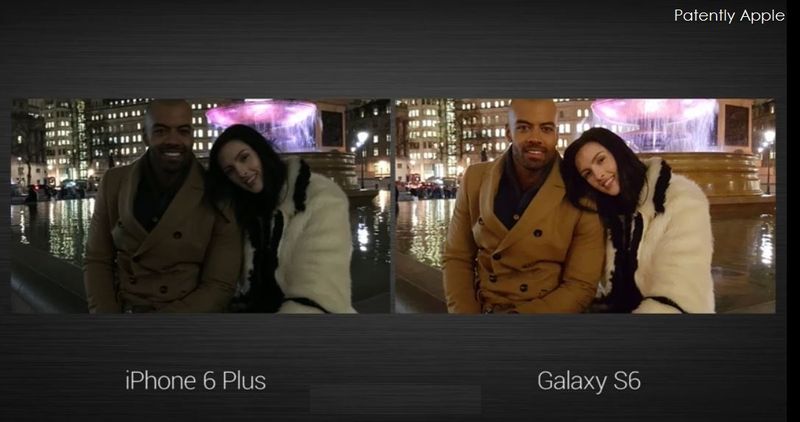 Other than making comparisons to the iPhone 6, both Galaxy models feature a 16-megapixel back camera that Samsung is touting as the brightest yet. The f1.9 lenses (the S5 had an f2.2 lens) have Smart Optical Image Stabilization, Real-Time HDR mode and other features. The front cameras are 5-megapixel units. Samsung also touts that the camera could be launched quickly by double-tapping the home button. Samsung claims that it will allow users to start taking photos in just 0.7 seconds flat.

They tried to take credit for LoopPay's technology as something they invented. Yet let's be honest, they only acquired LoopPay eleven days ago and so they've added nothing to it. Of course Samsung believes that their solution is vastly superior to other NFC-only pay services … obviously making reference to Apple Pay.

Lastly, as we reported on back in February, Samsung is offering 115GB of OneDrive storage for two years from Microsoft. OneDrive and other Microsoft apps will come preloaded on the devices.

In the end, the presentation was much shorter than expected and it really came across as Samsung trying to convince people in the audience that they were the true and only innovators in the industry today. They compared both Apple's camera and video camera as vastly inferior to theirs. They were continually trying to prove that they were the real innovators and that their new smartphone was better than Apple's iPhone 6. It simply came across as a company that's not being confident in their own abilities and truly childish and forced.

The new Samsung Galaxy S6 smartphones will go on sale on April tenth in most major markets.

Update: Below are a few high-end photos of the Galaxy S6 and Edge designs. When I purchased my iPhone 6 Plus, the only slight negative in the design that I found was that the backside camera slightly protruded from the backside. Now that I see the gigantic camera pimple on the back of the new Galaxy S6, I feel so much better about my iPhone 6 Plus design. Thanks Samsung!

(Note that in some browsers you'll need to click on the image and once it's seen, click on it a second time to see the photos fully enlarged.)

Did Samsung hit a home run with their new Galaxy S6 Today? Certainly not in my eyes. However, for dedicated Samsung fans there might be enough pizazz in the new Galaxy smartphone designs to help spur on sales that are desperately needed, especially in North America and Europe. Will the new smartphones beat out Xiaomi's new smartphones in China? I highly doubt it, but only time will tell.