According to statistics from industry sources, Apple led Taiwan's smartphone market in sales volume and sales value in February and had the best-selling single model for the fifth consecutive month thanks to its big-screen iPhone 6 and 6 Plus.

Yesterday Samsung openly declared war on Apple's iPhone 6 in Taiwan. Samsung Electronics launched their newest version of its flagship Galaxy S smartphone series in Taiwan with the aim of regaining the largest market share in the country, which is currently held by Apple.

Samsung hopes it will regain the title of the top smartphone maker in Taiwan by sales volume, sales value and single model in the second quarter because it has also strengthened its product offering in the mid-range and entry-level segments, Tu said. Of course it's the "sales value and single model" statistics that will matter, not volume of all models including mid to low-end models Apple doesn't compete in.

While sales of Apple's iPhone 6 will eventually revert back to seasonal volumes, a supply chain report that we covered on Wednesday suggested that the iPhone 6 still has strong momentum going into Q2. Judging from current order visibility, supply chain sources estimated that 45-50 million iPhone 6 devices would be shipped worldwide in the second quarter of 2015 with China contributing one-third of total shipments.

Will the iPhone 6 still have enough momentum to stop the all-new Samsung S6 from becoming the number one smartphone in Taiwan where Samsung has declared war on the iPhone 6? Only time will tell.

Beyond Taiwan, Samsung's first World Tour event was held at the Armani hotel in Dubai on March 24 which attracted about 260 dignitaries, including major Middle East partners, journalists and opinion leaders. The participants were given a chance to experience the Galaxy S6 which is mounted with Arabic user experience.

Samsung Electronics also held a World Tour event in Moscow in Russia on March 25. It was held as a fashion show event associated with the Moscow Fashion Week. Samsung’s Galaxy S6 World Tour event will be held in Singapore on March 26, Beijing on March 31, Hong Kong on April 1, and Tokyo on April 8. 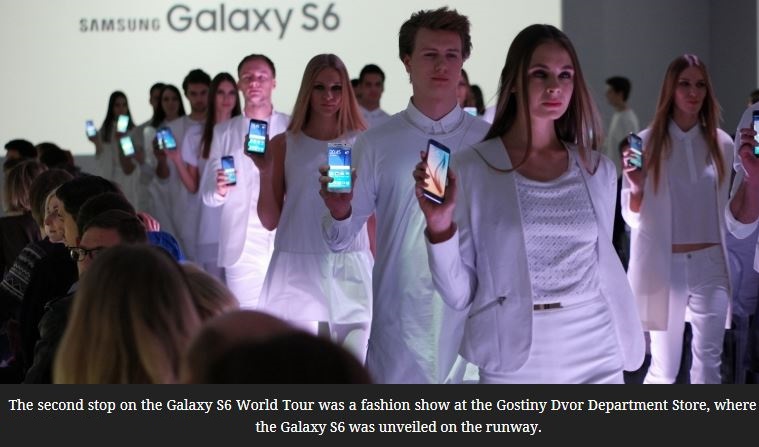 Samsung is going all-out in the hopes of finally getting back on track after experiencing record low 3Q and 4Q profits. Samsung has also lost their smartphone leadership to Apple due to their wildly successful iPhone 6 that has swept the globe.