Earlier this month we posted a report titled "The Apple Watch has an Eye on the Enterprise Market," where we noted that enterprise app developers like Salesforce, Citi Mobile and Evernote were jumping on the Apple Watch right out of the gate with more business apps on the way. Today CNBC spoke with Markus Adolph, CEO of EBF at the CeBIT trade show in Hanover, Germany. EBF is focused on bring business apps to the Apple Watch.

German firm EBF has upgraded its Connector app to enable managers to carry out functions such as approving holidays or updating calendar information straight from their wrist. As such, EBF is gambling that business users will adopt the Apple Watch for work. Its app integrates with enterprise software from the likes of SAP and BlackBerry.

EBF's app works by pushing smartphone notifications through to the Apple Watch. Users can then respond on their smartwatch or use their smartphone for more complicated tasks. So far, the app allows users to carry out functions such as viewing time sheets, modifying calendar information, and distributing important company news announcements. You could read more about this in the CNBC report.

Germany's EBF has around 400 enterprise customers and hopes to monetize the app by upping its price. Currently it charges 45 euros (US $47.73) per device to integrate its app with a company’s enterprise software. The new app is only available for the Apple Watch even though the company may consider an Android version later down the road. 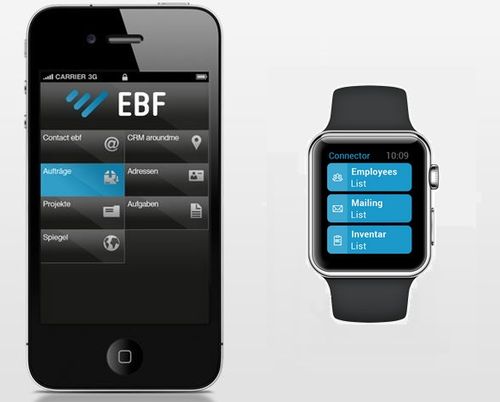