According to a new Gartner report, Apple reported its best quarter ever in the fourth quarter of 2014, which saw it sell 74.8 million units and move to the number 1 position in the global smartphone market. While we've basically known this for weeks, it's always nice to see new stats put it in black and white for all to see, especially Samsung.

Gartner noted in their report that Apple's first ever large-screen phones continued to see huge demand with sales in China and U.S., growing at 56 percent and 88 percent, respectively. Apple's strong ecosystem and its new iPhone 6 and iPhone 6 Plus drove strong replacements within the iOS base. These new smartphones also offered new users, who are looking for larger screen phones, a strong alternative to Android. 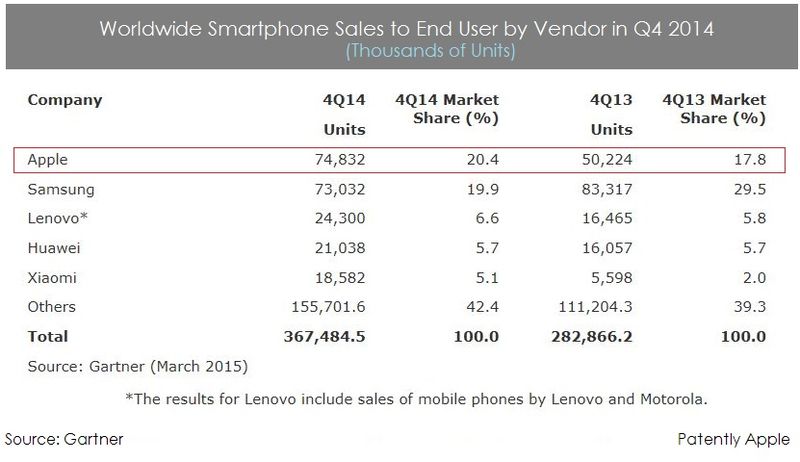 In 2014, sales of smartphones to end users totaled 1.2 billion units, up 28.4 percent from 2013 (see Table 2) and represented two-thirds of global mobile phone sales.

"Samsung's performance in the smartphone market deteriorated further in the fourth quarter of 2014, when it lost nearly 10 percentage points in market share," said Anshul Gupta, principal research analyst at Gartner. "Samsung continues to struggle to control its falling smartphone share, which was at its highest in the third quarter of 2013. This downward trend shows that Samsung's share of profitable premium smartphone users has come under significant pressure."

Samsung just unveiled their new Galaxy S6 and 6 Edge on Sunday in Barcelona. Every time they launch a new smartphone, Samsung's co-CEO and mobile division chief Shin Jong-kyun jumps up and down saying that pre-orders are extremely strong and like we've seen in the past year, sales were actually off. Shin Jong-kyun told the Korea press today that "starting with the official launch scheduled for April 10, we can restore our market share in the high-end market." He added that "The response is better than expected." Yes, the same bravado every time and we know it didn't end well for them. Will they pull it off this time around? Only time will tell.

In the end, Gartner, like IDC, focus only on the units that are shipped and/or sold. That's what these research companies report on. Yet we have to continually point out that while it's always interesting to keep tabs on shipments and sales, it's the profits generated from these smartphones that really matter, especially to those in the market. Or at least it should be. Last month we reported that 93% of smartphone profits were made by Apple, according to Canaccord Genuity. Others have pegged it 88.7%. That's what matters, as long as the volume is in a healthy range.

For more statistics about the iPhone's success in Q4 2014, check out our statistics archives.