During Monday's Special Spring Forward Apple Event we learned a little more about the Apple Watch which is launching on April 24, 2015. We specifically learned more about the new customized metal alloys that will provide the Apple Watch with such value. Apple states that "Inspired by the inherent beauty of gold, we created Apple Watch Edition in 18-karat solid gold. Since it's a soft metal, susceptible to nicks and scratches, our metallurgists engineered an entirely new alloy that's up to twice as hard as standard gold. This allowed us to achieve the exact hues of yellow and rose gold we envisioned, without compromising on durability." Today the U.S. Patent & Trademark Office published a patent application from Apple titled "Crystalline Gold Alloys with Improved Hardness," that reveals the technology behind the process that creates the yellow and rose gold found in Apple's higher-end Apple Watch line called the "Watch Edition."

Commercial gold alloys, such as the 18 karat gold (Au) alloy, have relatively low yield strength and low hardness (e.g. about 130-150 Vickers). Some gold alloys have been developed to have improved hardness of about 240-250 Vickers, but are still less than 300 Vickers. For example, U.S. Pat. No. 6,406,568 discloses 18-karat green gold alloys containing Au--Ag--Cu--Zn that are capable of being aged-hardened to a hardness of about 240 Vickers (VHN). U.S. Patent Publication No. 2013/0153097 discloses 18 karat Au--Al gold alloys with a hardness less than 300 VHN. The alloys have improved hardness by forming Al.sub.2Au.sub.5 precipitates.

With a hardness lower than 300 VHN, the gold alloys may not be durable or may not have adequate scratch resistance for use as enclosures for electronic devices, including mobile phones, tablet computers, notebook computers, instrument windows, appliance screens, and the like. It may be desirable to have alloys with improved yield strength and hardness such that the alloys do not dent easily and have improved scratch resistance and durability.

Generally, gold alloys can have different colors, such as yellow gold, red gold, rose gold, pink gold, white gold, gray gold, green gold, blue gold, or purple gold. The gold alloy composition varies with the color. Some colors, such as yellow gold, pink gold, or rose gold, may be cosmetically appealing to consumers for use as enclosures for electronic devices. 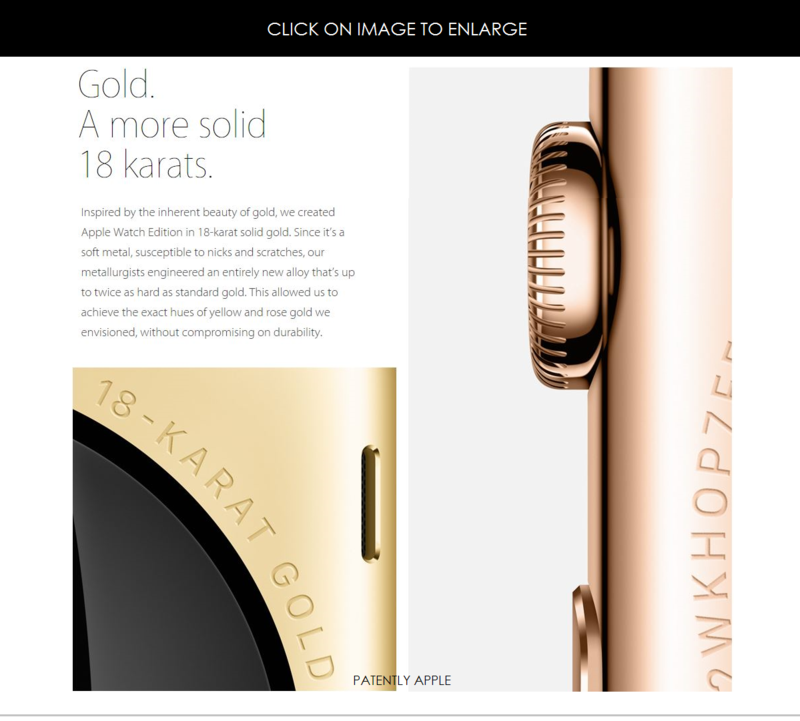 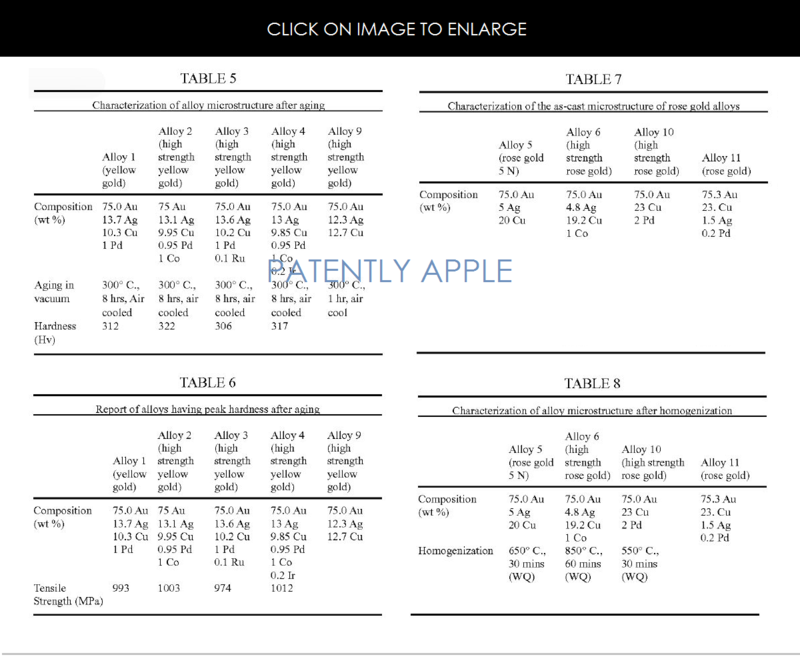 Apple notes that standard methods can be used to evaluate cosmetic appeal including color, gloss, and haze. The color of objects may be determined by the wavelength of light that is reflected or transmitted without being absorbed, assuming incident light is white light. The visual appearance of objects may vary with light reflection or transmission. Additional appearance attributes may be based on the directional brightness distribution of reflected light or transmitted light, commonly referred to glossy, shiny, dull, clear, and haze, among others.

Apple further notes that without wishing to be held to any theory or mechanism of action, by controlling the temperature of recrystallization heat treatment to be at or close to the lowest temperature at which the a homogenous structure can be formed for a particular alloy, the alloy can be recrystallized by forming equiaxed grains having an average length of less than 40 microns or less than 30 microns. The resulting alloy has improved resistance to cracking than alloys with larger grains.

Apple credits Zechariah Feinberg and James Wright as the inventors of patent application 20150071814 which was originally filed in Q3 2014. See the Apple Watch video about their gold process here