Apple Reveals One of the Systems behind Passbook and Apple Pay Apple Invents a System to Manage Movement States of an iDevice

Apple's patent application discusses Touch ID and NFC that relate to Apple Pay in context to Passbook applications. In Apple's patent FIG. 3 noted below we're able to see a schematic view of a movement management system #301 of electronic device such as an iPhone.

In addition to leveraging motion sensor data that may be provided by motion-sensing component 122, the movement management system #301 may leverage various other types of data accessible to an iDevice like an iPhone (device #100) in order to determine the current movement state of the device such as data provided by a pass application #103a of the iPhone – such as Passbook. 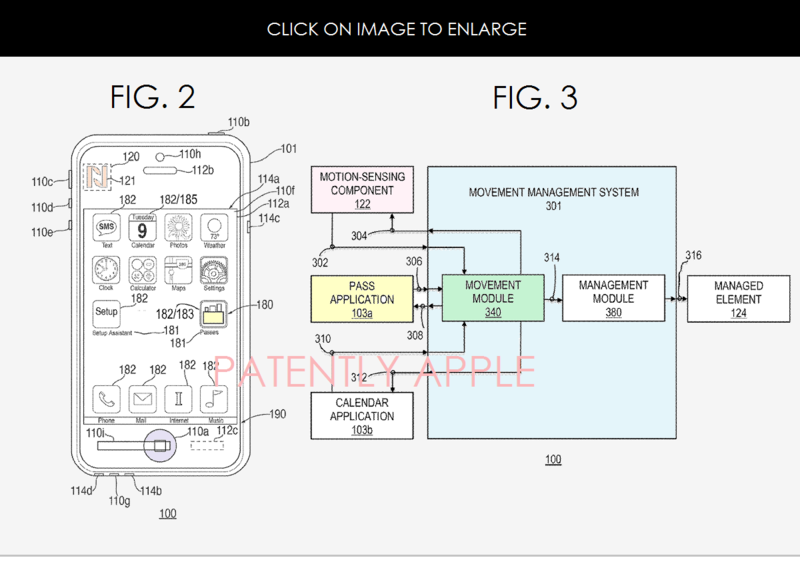 Passbook includes many suitable applications such as passes (e.g., transportation boarding passes, event tickets, coupons, store cards, mobile payment cards, etc.). Pass application 103a may act as a digital wallet (e.g., in conjunction with NFC component 120) for enabling an iDevice to present information indicative of a pass to a merchant (e.g., via any suitable output component or antenna #116 or communications component #106, etc.), which may enable a merchant to redeem the pass, and/or which may enable an iDevice to update the pass with information from the merchant.

Passbook for Apple Pay: As another example, Passbook may include a credit card pass, which may enable an iDevice to electronically access a user's credit card credential (e.g., in conjunction with NFC component #120) and provide payment information indicative of that credit card credential to a product merchant via device 100 (e.g., in conjunction with an NFC component as an NFC communication to a remote merchant terminal, such as via antenna #116), where the merchant may accept the payment and may provide specific information to pass application 103a indicative of the accepted payment.

Pass data #306 may be any suitable information indicative of a pass that has been or may be redeemed, updated, and/or invalidated via Passbook and the movement module may be configured to utilize such pass data independently or in combination with any received motion sensor data and/or any other suitable data accessible by an iDevice for determining a movement state of device. Such pass data may include any suitable information descriptive of any suitable characteristic of any suitable pass available to Passbook regardless of whether or not the pass has been redeemed, invalidated, updated, or otherwise utilized at the current moment in time that pass data was generated or at any other specific moment in time.

As a consumer learning of Apple Pay looked simple. Now we're able to see that there's a lot of technology behind the simple system that involves a movement management system. For those who want to dive into this invention a little deeper could do so by reviewing patent application 20150065107 here.

Apple credits Swapnil Dave, Loan Uilecan and Varun Vora as the inventors of this patent application which was originally filed in Q3 2013.