On March 19, 2015, the U.S. Patent & Trademark Office published a patent application from Apple that's about touch displays. Of interest is one very large touch display. Now we know that Apple's senior vice president of Software Engineering Craig Federighi stated that in October that Apple experimented with touch screens for an iMac but that they eventually gave up on the idea and instead focused on advancing their trackpad. Yet as Apple's CEO stated yesterday in an interview with Fast Company, "there will be things where we say something and two years later we'll feel totally different. Actually, there may be things we say that we may feel totally different about in a week. We're okay with that." Today's report reveals a unique application for a large display that may break the golden rule of no touch for larger displays.

Apple's patent FIG. 4 that is presented below is a perspective view of an illustrative electronic device such as a display for a computer or television with a touch screen display. With this type of arrangement, the housing for this display or computer may be mounted on a wall or may have an optional structure such as a support stand to support the device on a flat surface such as a table top or desk. 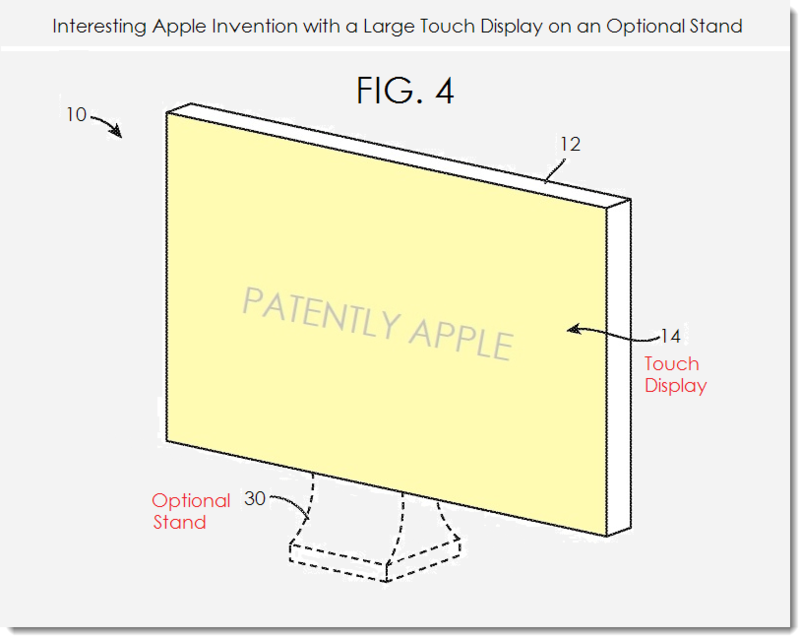 While an iMac with a touch display may be debatable with many, Apple sees that there could be an application where it makes more sense. In the enterprise, any department head that holds meeting with their respective staff to update them on new processes, products, marketing, accounting and so forth, could benefit from the device shown in patent FIG. 4.

The large touch screen display could be mounted on an "optional stand" that Apple points to above at #30 that would act like an 27 inch, or 32 inch-Plus if it's a TV or Whiteboard, and act as a mobile display that could be brought into a conference room for a presentation. Everything that the department head worked on is right in the display which is their computer. With it having a touch display, the presenter could stand by the display and interact with it with their finger or future stylus, much in the same way that Microsoft's new Surface Hub works. Microsoft just introduced this back in January.

With Apple working with IBM on MobileFirst, a new enterprise computer/whiteboard hybrid could be of great value. For consumers, having their desktop display on an optional stand would allow them to move the display to another room to play games on or watch movies. It would be great for students for work and entertainment.

Apple says that the touch Display in FIG. 4 could also be a TV. Heck, think of this hybrid computer/TV with built in Apple TV and their new TV service built right in. Cool. If Microsoft could build Xbox into Skylake-processor based desktops this fall, then why can't Apple do the same with Apple TV?

All of a sudden, it's not a touch screen for only an iMac-Like computer; it's a hybrid device that makes sense for many applications in the enterprise, home or dorm room. Can Apple change their minds on the idea of touch screens for larger displays? Yes, they can.

Apple credits Jinghong Chen, Matthew Rogers, Cheng Chen, Enkhamgalan Dorjgotov, Sunggu Kang, Kai Wang and Kuo-Hua Sung as the inventors of patent application 20150077646 which was originally filed in Q3 2013. Considering that this is a patent application, the timing of such a product to market is unknown at this time.