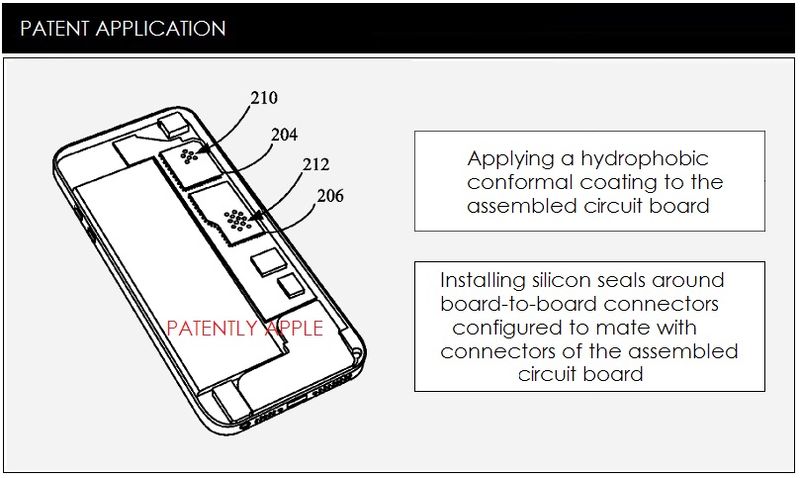 We first learned that Apple was researching ways to successfully waterproof future iDevices back in March 2012 where a silicon rubber seal was explored. Then in 2013 Apple revealed another invention relating to waterproofing using nano coatings. In 2014 Apple was granted a waterproofing patent that covered the use of glass-filled nylon. Today, a new waterproofing patent application from Apple was published by the U.S. Patent & Trademark Office which covers the use of a hydrophobic conformal coating that is designed to increase moisture resistance of electrical components. Which method Apple will finally settle on for waterproofing future iDevices is of course unknown at this time.

Electronic devices have become increasingly more important for accomplishing everyday tasks. Moreover, people who rely on electronic devices tend to carry them along to locations in which the electronic devices can incur damage. One form of damage that can be detrimental to an electronic device is water damage. Many electronic devices are susceptible to water damage because they are not fully sealed and include various openings for charging, connecting peripherals, and inputting and outputting audio. While bulky cases have had a certain amount of success at mitigating water entry through the aforementioned openings, a protective case is of little or no value once water has entered a device housing. When water enters into the device housing, some high powered components and wiring are often subject to damage even when a minimal amount of water enters the electronic device. In particular, corrosion of soldered components is quite common and can lead to device failure.

Apple's invention is all about improving moisture resistance of an assembled printed circuit board. In one embodiment, a method is set forth for applying a hydrophobic conformal coating to a printed circuit board (PCB). The method can includes a step of depositing a hydrophobic conformal coating across an exterior surface of the electromagnetic interference (EMI) shield and the PCB by a chemical vapor deposition (CVD) operation.

In the bigger picture, immersing electronic devices in water generally has predictably negative results. Through testing it has been determined that high voltage power components are more likely to short or malfunction after only brief exposure to liquids or moisture. More specifically, exposed metal areas having high voltage differentials in close proximity can easily experience short circuit events when corrosion or water immersion bridges the gap between such areas. By providing an insulating layer or barrier around these highly susceptible parts, water resistance can be substantially increased without obscuring functional openings leading into a device housing of a particular electronic device. A thin hydrophobic (i.e., water resistant) conformal coating having a thickness between at least one and ten microns can be applied to a substrate using a plasma-assisted chemical vapor deposition (PACVD) process. The PACVD process charges the surface of the substrate so that the coating can be bonded to the charged surface.

Apple notes that the vacuum chamber can be filled with a fluoropolymer gas at which point a voltage is applied to the gas, turning the gas to plasma. The plasma then settles on and adheres to the component, providing a robust, water-resistant, corrosion-resistant protective seal for the component.

Unfortunately, when the plasma from a deposition operation settles on the component, structures such as EMI shielding can prevent the coating from reaching covered portions of the component. One way to overcome such a limitation is to include a series of openings in cage structures disposed on an assembled electronic device in locations proximate to moisture-sensitive components. When the cage structure is an electromagnetic interference (EMI) shield, the openings can be maintained at a size small enough to prevent EMI from entering or escaping the EMI shield. By maintaining a size of the openings below a quarter of a critical frequency wavelength of the EMI, performance of the EMI shield can be maintained. In this way the openings can be positioned to provide access to moisture-sensitive components disposed within the EMI shield without degrading performance of the EMI shield. 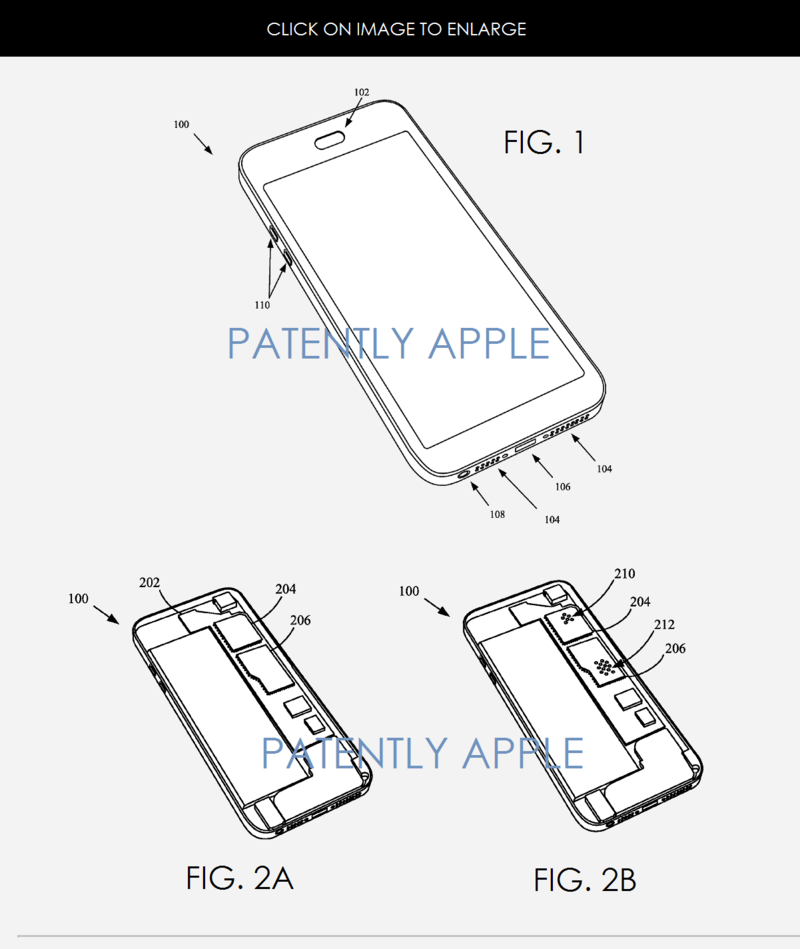 Apple's patent FIG. 1 noted above shows a simply a perspective view of an electronic device 100 – an iPhone that illustrates a number of openings through which water can ingress into its housing. 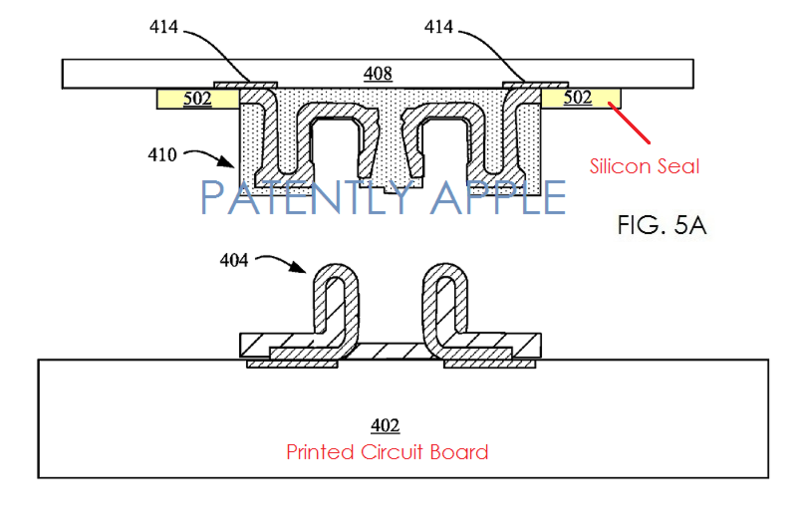 Apple credits Nicholas Merz, Scott Myers, Gregory Stephens and Joseph Poole as the inventors of patent application 20150060110 which was originally filed in Q 2012. Scott Myers worked on Apple's 2014 granted patent for waterproofing. Considering that this is a patent application, the timing of such a product to market is unknown at this time.