Every once and a while Apple's engineering teams take a crack at inventing Apple's next docking station. In 2012 Apple invented an inductive charging dock and in 2014 two dock station inventions surfaced regarding lightning connector based docks that featured a flexible dock connector. Today, the U.S. Patent & Trademark Office published a patent application from Apple that reveals yet another docking station invention that's a little more elaborate. Although it appears to be designed for the iPhone, Apple notes that the general design could be used with other devices including an iPad, Apple Watch, bracelet, pendant and oddly "a piece of clothing." Apple also notes that the device will be able to wireless charge multiple devices via inductive charging. More interestingly is the fact that you might be able to turn your coffeemaker on from this dock or even lower the heat from this new dock/home appliance. Whether this new docking station invention will simply collect dust in Apple's design room like all the others or finally make its way to market is unknown at this time. 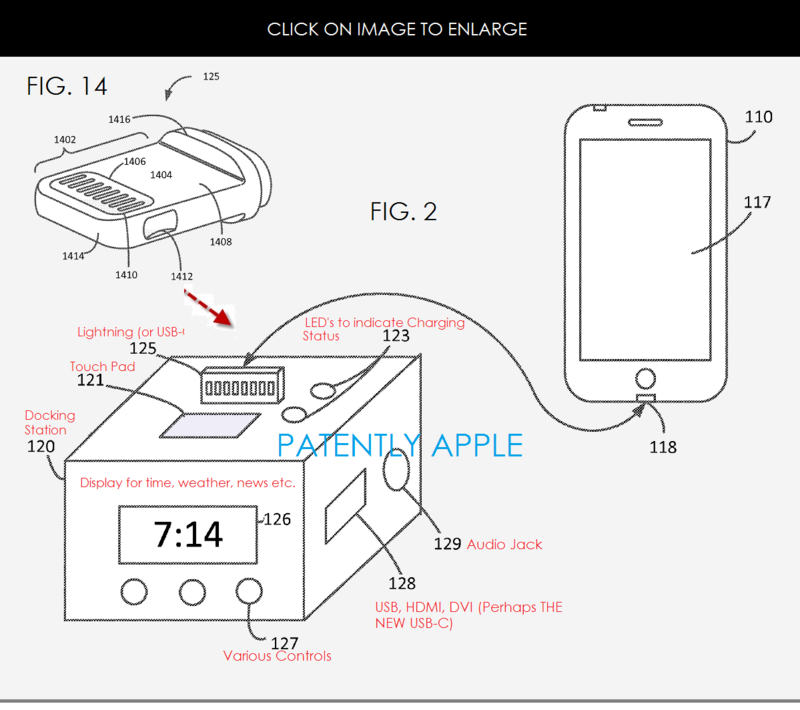 The docking station may further include one or more receptacles for communicating with one or more accessories. In other embodiments, one or more receptacles may be replaced with dedicated or tethered cables having a connector insert at a far end. These docking station connector inserts and receptacles may mate with connector receptacles or inserts for various interfaces such as Universal Serial Bus (USB), High-Definition Multimedia Interface (HDMI), Digital Visual Interface (DVI), power, Ethernet, DisplayPort, Thunderbolt, Lightning and other types of standard and non-standard interfaces. With Apple introducing the new USB-C connector for the MacBook this week, it's possible that they could extend it to such a dock as noted above. 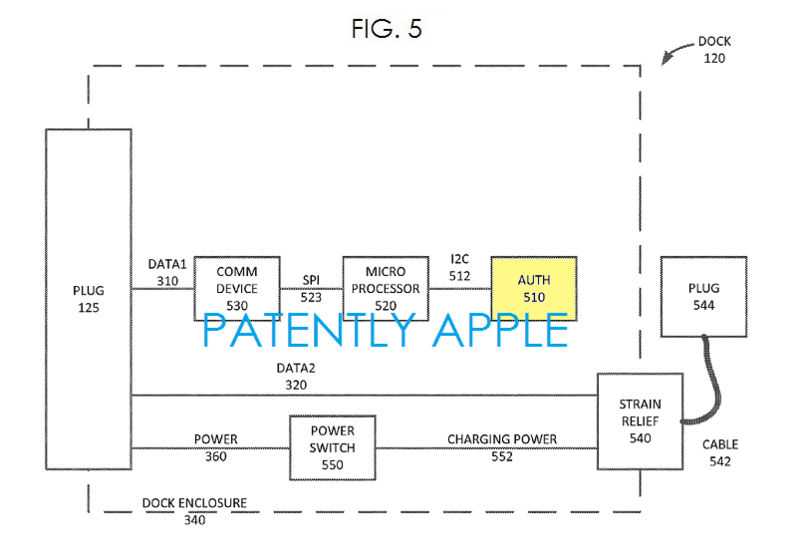 This authentication may occur over a data signal path of the smart phone or other portable computing device. But this may consume one of a limited number of data paths that could otherwise be used for communicating with one or more accessories. Accordingly, another illustrative embodiment of the present invention may provide a docking station where authentication and identification may occur over a control pin. This may make an additional data path available for communication with one or more accessories.

Apple notes that other illustrative embodiments of the present invention may provide docking stations with additional features. One specific embodiment of the present invention may provide a docking station that may include various additional input and output devices or components such as light-emitting diodes (LEDs), buttons, touch pads, displays, wireless communication devices, and other types of components.

Light-emitting diodes may be used to indicate a charging status of a battery in a portable computing device or accessory. For example, a multi-colored LED may turn a first color to indicate that a charge is occurring and a second color to indicate that charging is complete. Light-emitting diodes may also be used in conjunction with proximity sensors. Specifically, an LED may light when motion near a connector insert is detected. This illumination may assist a user in attaching a portable computing device to a docking station, or it may assist a user in finding buttons, touch pads, or other controls on the docking station.

A display may be used to indicate time, mode of the device, weather, news, or other data. This data may be retrieved from an accessory, from a portable computer device, from the Internet or a cellular network, or from other source. The display may be used to indicate an alarm or snooze setting, do-not-disturb or airplane settings, and other types of modes and settings.

Wireless communications devices may be included and used as remote controls for devices such as coffee makers, thermostats, lighting, and other types of devices.

The wireless communication devices may also connect to cellular or Wi-Fi networks to retrieve, provide, or synchronize data. Embodiments of the present invention may also provide docking stations that may include gesture detection. Gesture detection may allow a user to interact with a docking station by simply making hand movements in the proximity of the docking station. For example, gestures may be used to put an alarm in a snooze state, to turn on a display, to show time, date, weather, news, or other information or combination thereof.

Apple credits Gerhard Schneider, Scott Krueger, Robert Watson, Alexi Kosut and Tony Ng as the inventors of patent application 20150070832 which was originally filed in Q3 2013. Considering that this is a patent application, the timing of such a product to market is unknown at this time.