On March 1, 2014, LVMH Moët Hennessy Louis Vuitton announced that Jean-Claude Biver, current chairman of Hublot, would be tapped as head of watchmaking for the group which also includes Hublot, TAG Heuer and Zenith. Last month we posted a report titled "Jean-Claude Biver Revs up the Rhetoric about TAG Heuer's coming Smartwatch vs. Apple Watch." We've been covering Biver's comments about the coming Apple watch being that Apple is taking on Switzerland's legendary luxury industry. Of course the Swiss watch makers fear Apple's entry into the watch market and the news surfacing in China that Apple now ranks ahead of Louis Vuitton for the number one luxury brand for gifts before they even have a watch on the market, has to be concerning for the Swiss watch makers. 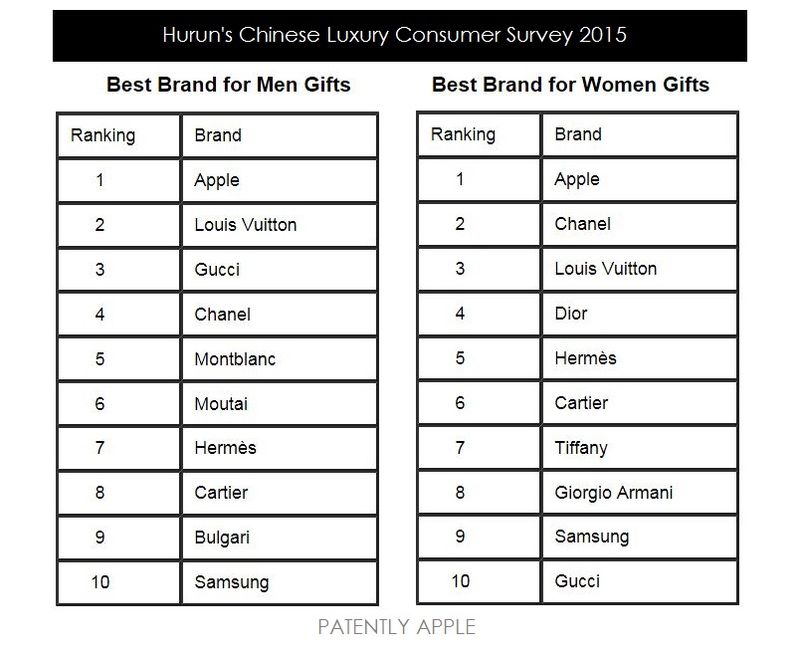 In China, iPhones not only outsold all other smartphones in the holiday fourth quarter, it also beat Louis Vuitton and Hermès to become the most preferred gift choice among the country's richest this year, according to China-based luxury publishing group Hurun Research.

A new Reuters report notes that "While the Chinese government's crackdown on luxury gifts has weighed on the country's spending on luxury goods, it also changed the spending habit of China's wealthy people who now prefer more practical items like iPhones and watches, said the publishing group."

Hurun Research said in a statement that "The upcoming Chinese New Year would be the peak of gift giving in China ... Apple has become the most eye-catching gift brand this year."

Apple is the number one luxury brand for gifts in the world ahead of Louis Vuitton watches as noted in the chart above. The official Hurun report which was published on January 29, noted that although consumer spending was down 5% for the year, "Consumer electronics, led by Apple, was the gift of choice, overtaking LV and last year’s Number One Hermes, which dropped down to seventh."

To view the Hurun report with their extensive list of holiday shopping winning luxury brands and categories click here.