On January 21 we posted a report titled "Apple's iPhone 6 Smashed Smartphone Sales Record on Samsung's Home Turf." Apple's iPhone 6 is the first smartphone by a foreign company to ever go beyond 20% market share in South Korea. Apple smashed that record with a 33% market grab surpassing South Korea's Pantech and LG electronics while shaving 14% from Samsung in November alone. That twisted Samsung's nose out of joint and magically the Government is now going to clamp down on foreign tech companies. 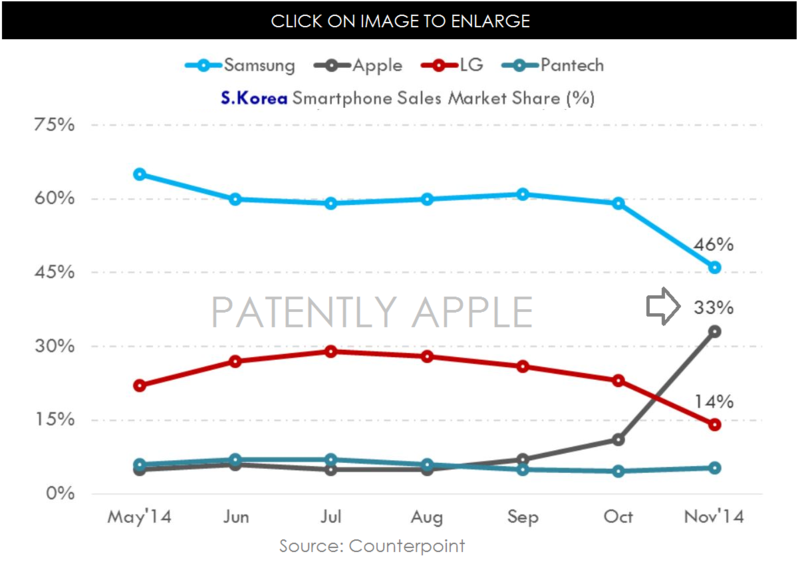 The country's anti-trust regulator announced its plan for this year on Feb. 1. What is most noticeable is a task force for information, communication Technology (ICT).

The FTC is said to establish a task force and closely monitor whether or not monopolistic companies like Google and Apple inflict damage to the Korean market using their dominant position in the market.

The regulatory body is paying attention to the fact that the two companies comprise 99.5 percent of the local mobile operating system market.

The regulator is also going to keep a close watch on imported essential parts of local flagship industries such as auto parts or electronics components.

While it's too early to speculate exactly what the FTC's task force is trying to establish here, its timing after Apple's stunning victory in Q4 against Samsung is suspicious. Their stated goal of looking into whether Google and Apple are inflicting damage to the Korean market is hostile in nature at minimum.

This latest news comes on the heels of the government cracking down on smartphone subsidies to hurt higher-end smartphone like the iPhone. Last week South Korean wireless carrier KT began to offer the iPhone 5S free to get around the subsidy regulations.

In the end, it'll be interesting to see what the FTC task force's final report will recommend on this front against Apple and Google. Stay tuned.