A new IDC report was published today for tablet shipments during the holiday quarter. IDC's Senior Research Analyst Jitesh Ubrani stated that the tablet market is still very top heavy in the sense that it mostly relies on Apple and Samsung to carry the market forward each year. Although Apple expanded its iPad lineup by keeping around older models and offering a lower entry price point of $249, it still wasn't enough to spur iPad sales given the excitement around the launch of the new iPhones. Meanwhile, Samsung continued to struggle on the tablet front once again. Yet in the big picture, IDC stated that overall shipments for tablets and 2-in-1 devices reached 76.1 million in Q4 2014. Considering that Apple doesn't make a 2-in-1 hybrid notebook-tablet, IDC's data skews the true numbers in this market segment. 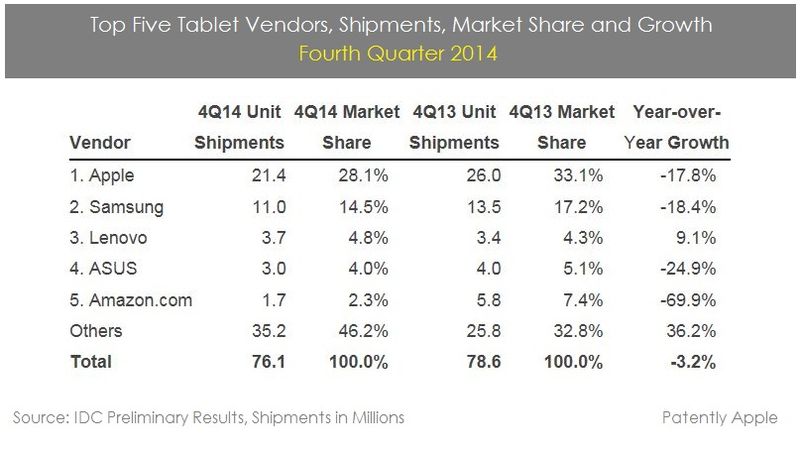 IDC notes that Apple's lead over other vendors has yet to be truly challenged as it shipped 21.4 million tablets, accounting for over a quarter of the market with 28.1% volume share.

Despite Samsung's woes, it managed to hold on to the second place with 11 million units shipped. Lenovo (4.8%), ASUS (4%), and Amazon (2.3%) rounded out the top 5 although only Lenovo managed to grow annually when compared to Q4 2013.

Lenovo maintained its tight grip on the Asia/Pacific market thanks to its massive scale in the PC business and the success of its low-cost tablet offerings.

Of course what skews these numbers is that IDC admits that they include 2-in-1 models which should be in notebook sales, not tablet stats. Apple doesn't make a 2-in-1 hybrid notebook-tablet model at this point in time. So in reality, Apple's iPad figures would be higher if IDC would have been fair and restricted their chart to representing pure tablet numbers.