Earlier today we posted a report tilted "Ericcson Attacks Apple with a Second Patent Infringement Lawsuit," which covered the background of the recent legal battle between Ericsson and Apple that began in January. The second attack on Apple was officially launched yesterday according to the time-stamp on the documents filed with the court in Texas. Our earlier report stated that there were 41 patents involved in this new case that Apple allegedly infringes. Ericsson actually filed two separate lawsuit filings with the court. In the first one, which we're covering in this report, only covers 8 of the 41. Although the second court filing has been made, it hasn't been made public at the time of our posting this report. In the end, Apple may be relying on the recent IEEE ruling on how royalties should be paid to patent owners, because Ericsson is adamant on demanding that the royalty formula should be based on past FRAND terms. This is likely where the battle is going to be fought. It's going to be a royal battle indeed.

In a report that we posted in December titled "China Stepping into Royalty Battle with Qualcomm." Qualcomm was the first to be rattled by the new IEEE ruling and China put the pressure on Qualcomm to lower the royalties for Chinese companies. Whether China will also step in against Ericsson in the future is unknown at this time, but the battle over patent royalties is going to be a raging one for some time to come and Ericcson is making it clear that it won't go down without a bloody fight in the courts to retain their high royalties. 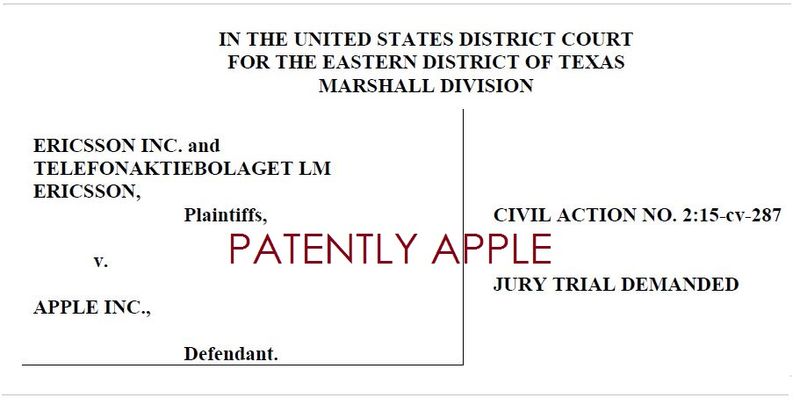 The following is directly from Ericsson's new lawsuit against Apple in a segment titled "Nature of the Action" as noted in full below:

1. Each of the Ericsson Patents-in-Suit (defined below) is essential to either the 2G GSM or 4G LTE standard, and Ericsson takes this step only after exhausting all other options to conclude a license with Apple on fair, reasonable, and non-discriminatory ("FRAND") terms. Ericsson has contractually committed to license its portfolio of patents that are essential to practice certain telecommunication standards ("Essential Patents") on FRAND terms, with an honest intent to conduct its licensing efforts in a manner consistent with the intellectual property rights policy ("IPR Policy") set by the European Telecommunications Standards Institute ("ETSI"). This commitment is entered into by means of declaration documents, serving as contracts between Ericsson and ETSI for the benefit of third parties practicing the standard. Ericsson repeatedly licensed its Essential Patents to companies worldwide, resulting in over one hundred agreements in the telecommunications industry alone, in which such companies have agreed to pay royalties to Ericsson in return for access to its global portfolio of patents on FRAND terms.

2. In 2008, Apple agreed to take a license to certain of Ericsson's patents that are essential to various industry standards. Before that license expired, Ericsson for two years extended offers to Apple to renew its license on FRAND terms. Ericsson even offered to arbitrate the dispute over a FRAND royalty for Ericsson's global portfolio of essential patents, and more recently, to enter into a binding determination of FRAND licensing terms for Ericsson's global portfolio of standard-essential patents before a U.S. federal district court. In sum, consistent with its obligations under the ETSI IPR Policy and to the technology community, Ericsson has sought in good faith to conclude a license agreement with Apple on FRAND terms.

3. Ericsson's efforts have failed because Apple refuses to pay a FRAND royalty for a portfolio license commensurate with licenses taken by existing licensees and consistent with the parties' prior license. Apple's gambit is indistinguishable from a "reverse hold-up," in which Apple abuses the protections afforded by FRAND while taking a free license to use Ericsson's patented technology. Such tactics give Apple a substantial, unfair edge over its telecommunications competitors who have agreed to—and who maintain—licenses under Ericsson's global portfolio of patents on FRAND terms. Apple has therefore not fulfilled its obligations to remain a third party beneficiary of the contract between Ericsson and ETSI.

4. On January 12, 2015, without notice, Apple filed a declaratory judgment suit against Ericsson in the U.S. District Court for the Northern District of California, seeking declarations that seven of Ericsson's patents—not at issue here—are either not essential or not infringed. In the event that those seven patents are proven essential, then Apple demands that the District Court determine a special FRAND royalty just for Apple and just for those seven patents-in-suit.

5. In view of Ericsson's much larger portfolio of standard essential patents in the United States and all over the world, Apple's strategy of litigating one standard essential patent at a time could result in perpetual litigation of hundreds of essential patents in dozens of countries, while Apple continues to infringe Ericsson's Essential Patents without paying FRAND royalties. Not only would this deprive Ericsson of revenues necessary to continue innovating, but it could negatively affect Ericsson's licensees, who have agreed to pay royalties on FRAND terms.

6. Such tactics are fundamentally unfair to Ericsson and its licensees, especially where (1) Ericsson's offer is consistent with the parties' last agreement, (2) Apple's competitors in the mobile telecommunications industry have actively licensed Ericsson's portfolio on comparable global FRAND licensing terms, and (3) Ericsson has even offered to arbitrate or litigate a FRAND royalty for Ericsson's Essential Patents in one proceeding before a U.S. federal district court. Ericsson takes this step of seeking the issuance of an exclusion order directed to Apple only after exhausting all other options to conclude a license on FRAND terms.

Eight of the Ericsson Patents

Earlier today we reported that Ericsson's new case against Apple alleged that 41 patents were being infringed upon. Ericsson filed two separated lawsuits yesterday and in this case, which is the only one that's active at the moment, lists only 8 of the 41 as noted below. 8,660,270 - Method and Arrangement in a Telecommunication System

WHEREFORE, Ericsson respectfully requests that this Court enter judgment in its favor and grant the following relief:

A. Adjudge that Apple infringes the Ericsson Patents-in-Suit;

C. Award Ericsson damages in an amount adequate to compensate Ericsson for Apple's infringement of the Ericsson Patents-in-Suit, but in no event less than a reasonable royalty under 35 U.S.C. § 284;

E. Award Ericsson pre-judgment and post-judgment interest to the full extent allowed under the law, as well as its costs;

F. Adjudge and declare that Apple refused to accept Ericsson's FRAND-compliant offers for a license to Ericsson's Essential Patents and, as a result, enter a permanent injunction against all Apple products found to infringe the Ericsson Patents-in-Suit;

H. Enter an order finding that this is an exceptional case and awarding Ericsson its reasonable attorneys' fees pursuant to 35 U.S.C. § 285;

I. Order an accounting of damages;

J. Award Ericsson its costs of suit; and

K. Award such other relief as the Court may deem appropriate and just under the circumstances.