Apple's iPhone-iOS Growth leapt by 46.1% in Q4 While Earning the Majority of the Smartphone Industry's Profit

According to new data from the International Data Corporation (IDC) Worldwide Quarterly Mobile Phone Tracker, Android and iOS accounted for 96.3% of all smartphone shipments, up slightly from 95.6% in 4Q13. Android outpaced the overall smartphone market for Calendar Year 2014 (32.0% vs 27.7%, respectively) while iOS beat the market in 4Q14 (46.1% vs 29.2%, respectively). What the report fails to continually acknowledge is that Apple iPhone accounted for 93% of the smartphone profits in Q4 which is really the most impressive statistic of all.

Llamas, Research Manager with IDC's Mobile Phone team noted that "What will bear close observation is how the two operating systems fare in 2015 and beyond. Now that Apple has entered the phablet market, there are few new opportunities for the company to address."

I think that Llamas has it all backwards. The real question should be, with Android owning the operating space in smartphones, why can't Android earn the majority of profits. Android accounted for 76.6% of the smartphone OS market in Q4 2014 and yet only pulled off 7% of the profit. Why is IDC applauding Android for being a complete loser? 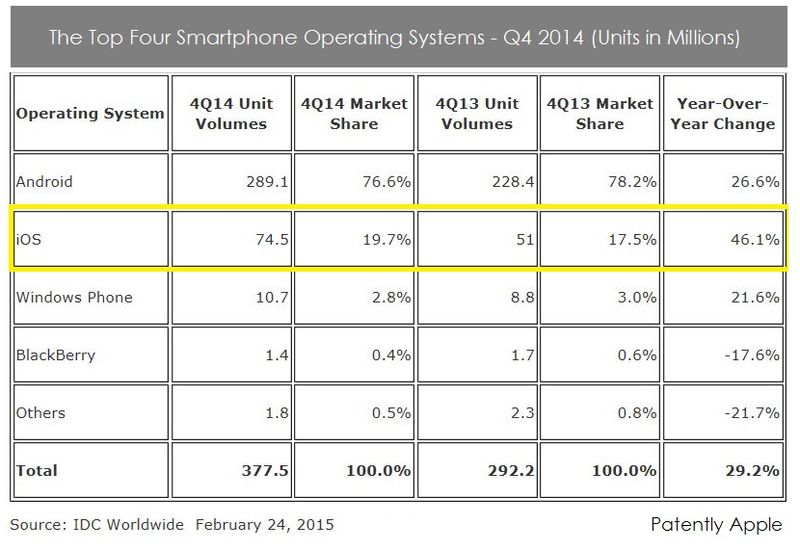 Apple's iOS saw a huge leap in Q4 2014 as noted in the chart above. Apple's iOS grew a very healthy 46.1% over Q4 2013. Much of this growth was due to the strong demand for Apple's new and larger iPhones and the reception they had within key markets. What remains to be seen is how Apple will sustain demand going forward, as larger screens were among the last gaps in its product portfolio.

Android pushed past the one billion unit mark in 2014, a significant milestone by itself but also because total Android volumes in 2014 bested total smartphone volumes in 2013. Samsung retained the leadership position by a wide margin says IDC and yet their profits fell off a cliff.

Who cares about volume leadership other than IDC? They continually fail to acknowledge that volume is useless when Apple accounted for 93% of smartphone profits in Q4. Who cares about a unit volume count when it fails to translate into profit?